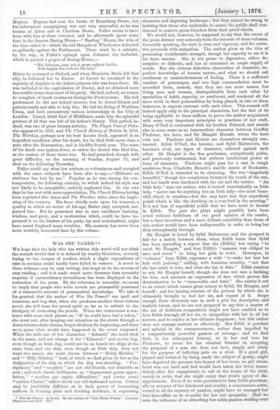 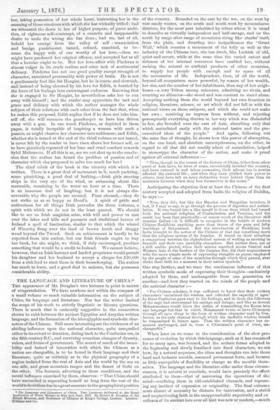 WAS SHE TAMED ?* WE hope that the lady who

has written this novel will not think the remark trivial that it is defaced by sundry blemishes, severely

trying to the temper of readers, which a slight expenditure of care in revision could hardly have failed to remove. A novel in three volumes may be easy writing, but is apt to be the reverse of easy reading ; and it is made much more tiresome than necessity requires if extraordinary slovenliness has been displayed in the correction of the press. By the reference to necessity, we mean to imply that people who write novels are presumably possessed of a reasonable amount of grammatical knowledge. We take it for granted that the author of Was She Tamed ? can spell and construe, and beg that, when she produces another three-volume novel, she will tame her proud spirit so far as to submit to the drudgery of correcting the proofs. When she commences a sen- tence with some such phrase as, "If he could have had a token," she must not, after keeping our attention on the strain through a dozen intermediate clauses, forget all about the beginning, and leave ma to guess what would have happened in the event supposed. When she calls one of her characters " Edward," she must stick to the name, and not change it for " Edmond ;" and as one dog, even though an Irish dog, could not be on board two ships at the same time, and one ship, even though an Irish ship, does not want two names, she must choose between " ' Biddy Skittles,'" and " Billy gkittles,'" both of which we find given by her as the designation of the ship on which the dog was standing. " Per- cipitancy " and " zoophite " are not old friends, nor desirable as new ; and such classic brilliancies as " deganeranti genus oppro- brium," " morbus que capite diffunditur," and (twice over) " earitus Christi," rather shock our old-fashioned nerves. Critics may be justifiably diffident as to their power of instructing authors in framing plots and devising incidents, in expressing

character and depicting landscape ; but they cannot be wrong in insisting that those who undertake to amuse the public shall con- descend to remove gross blunders from their proof-sheets.

We would not, however, be supposed to say that the errors of the press detract very seriously from the interest of these volumes. Generally speaking, the style is clear and vigorous, and the narra- tive proceeds with animation. The author gives us the idea of possessing considerable strength, though her capacity to use it is far from mature. She is not prone to digression, either de- scriptive or didactic, and has at command an ample supply of words. But she evinces defective observation of character, fin- perfect knowledge of human nature, and what we should call crudeness or unmelodiousness of feeling. There is a sufficient number of personages, and one high commendation must be accorded them, namely, that they are not mere names, bat living men and women, distinguishable from each other by specialties of habit, capacity, or sentiment, and rendered all the more vivid in their personalities by being placed, in two or three instances, in express contrast with each other. This remark will indeed apply only to the principal characters, but the fact of its being applicable to them suffices to prove the author acquainted with some very important principles or practices of her craft. Harry O'Neil is contrasted with his brother Edward, and stands also in some sense as an intermediate character between Geoffry Finderne, the hero, and Sir Hengist Horsair, whom the hero cuts out. Finderne and Horsair are themselves strongly con- trasted. Edith O'Neil, the heroine, and Sybil Maltravers, the heroine's rival, are types of character, relieved against each other. Sir Hengist is the fine gentleman, scrupulously polite, and graciously sentimental, but without intellectual power or force of character. Finderne might pass for a cast in rough sandstone from Charlotte Bronte's marble statue of Rochester. Edith O'Neil is intended to be charming. She was "singularly beautiful," though her complexion betrayed the touch of the sun, and her hands were hardened with the oar and the rudder. " An Irish lady," says our author, who is herself unmistakably an Irish lady, "never can be anything but an Irish lady—the most beau- tiful object in creation—but she may have lost that superficial polish which is like the dewdrop on a rose-bud in the morning." It is not loss of superficial polish that we have most to lament in Edith. The part she plays might possibly have been acted without forfeiture of the good opinion of the reader, but a finer invention and a more delicate sensibility than those of this author would have been indispensable in order to bring her thus triumphantly through.

Sir Hengist is loved by Sybil Maltravers, and the prospect is fair for a match between them, when Edith hears that Sybil has been spreading a report that she (Edith) was trying "to catch Sir Hengist," and that Edith's "mamma was obliged to save and screw " to bring her girls to town. Hereupon, in "crimson" fury, Edith expresses a wish "to make her tear her hair with jealousy," adding, with feminine severity, " not that she has much to tear, and what she has is false." Edith resolves to win Sir Hengist herself, though she does not care a farthing for him, and assumes an expression of face which proves this determination to be "immovable and fatal." She carries it out to an extent which causes great misery to Sybil, Sir Hengist, and herself ; and her taming consists of the process by which she is ultimately brought to feel her sin, and repent of it. Scope enough there obviously was in such a plot for descriptive and analytic talent, and we are not prepared to say that a master of the art of fictitious composition might not have enabled us to love Edith through all her sin, to sympathise with her in all her sorrow, and to rejoice in her ultimate happiness ; but this author does not manage matters so effectively. Her Edith is petulant and spiteful in the commencement, rather than impelled by a tempestuously powerful passion of revenge ; and we find little in her subsequent history, or in her real love for Finderne, to atone for her criminal blunder in accepting the proposal of a man she does not love, simply and solely for the purpose of inflicting pain on a rival. If a good girl, piqued and irritated by being made the subject of gossip, might have deprived the peccant tale-bearer of her lover, no girl whose heart was not hard and bad would have taken her lover, imme- diately after the engagement, to call at the house of the rival, merely in order that she might enjoy that rival's agony of dis- appointment. Even if we were permitted to hate Edith provision- ally on account of her falsehood and cruelty, a consummate artist, versed in all the mystery of passion, might have so managed her true love-affair as to re-enlist for her our sympathy. Had we seen the influence of an absorbing but noble passion stealing over

her, taking possession of her whole heart, instructing her in the meaning of those emotions with which she has wickedly trifled; had we witnessed the dawn in her of higher purpose, of purer ambi- tion, of righteous self-contempt, of a contrite and inappeasable desire to undo the wrong she has done ; had we, last of all, beheld her emerge from the valley of self - renunciation and benign punishment, tamed, refined, ennobled, to be- come the happy wife of one worthy of her love,—then we might have pardoned her original offence, and accepted her as all that a heroine ought to be. But her love-affair with Finderne is almost vulgar in its crude realism and utter lack of sentimental delicacy. Finderne has not one good quality except strength of character, associated presumably with power of brain. He is not a gentlemanly fool like Sir Hengist, but he is coarse and clownish, and instead of being elevated by his love for Edith, is hurried by the force of his feelings into extravagant rudeness. Knowing that she is engaged to Sir Hengist, he nevertheless asks her to run away with himself ; and the reader may appreciate the tact and grace and delicacy with which the author manages the whole subject of their relations with each other from the fact that, when he makes this proposal, Edith replies that if he does not take him- self off, she will summon the gamekeeper to have him driven away with a gun. In one word, Finderne, as depicted in these pages, is totally incapable of inspiring a woman with such a passion as might chasten her character into nobleness ; and Edith, whether she is tamed at the end of the third volume or not tamed, is never felt by the reader to have risen above her former self, or to have genuinely repented of her base and cruel conduct towards Sybil Maltravers. If all this is so, are we not shut up to the conclu- sion that the author has found the problem of passion and of character which she proposed to solve too much for her?

The chief merit of the book is the vivacity with which it is written. There is a great deal of movement in it, much yachting, some picnicking, a good deal of bathing,—Irish girls steering ships in the very eye of the wind, or swimming about like mermaids, remaining in the water an hour at a time. There is an immense deal of laughing, but it is not always dis- coverable -why the people are amused. Puns abound,—they do not strike us as so happy as Hood's. A spirit of pride and enthusiasm for all things Irish pervades the three volumes, a spirit with which we do not in the least quarrel. We should like to see an Irish magician arise, with will and power to cast over the lakes and hills and peasants and traditional heroes of Ireland a spell of fascination, similar to that which the wizard of Waverley flung over the land of brown heath and shaggy wood beyond the Tweed. Such an achievement is hardly to be expected from this author, but our Irish friends ought to buy her book, for she might, we think, if duly encouraged, proddce something that would be a credit to Ireland. We cannot believe, however, that an Irish baronet and landed proprietor would permit his daughter and her husband to accept a cheque for £20,000 from a rich lord to start them in their housekeeping. The author has much to learn, and a good deal to unlearn, but she possesses considerable ability.