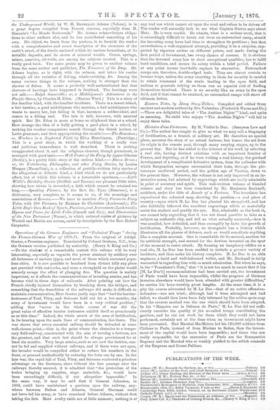 and Co.)—The author has sought to give us what we may call a biography of fortification, as a branch of military art. He describes no special place, narrates the story of no actual fortress, but traces the art from its origin in the remote past, through many varying stages, up to the present day. But he has added to the interest of his work by selecting a real site, having distinct relations with an important frontier of France, and depicting, as if he were writing a real history, the gradual development of a complicated defensive system, from the palisades with which Burgundian savages surrounded their huts, through the pic- turesque mediaeval period, and the golden age of Vauban, down to the present time. Moreover, the volume is not only improved in an in- structive sense, but adorned by engravings which are really admirable in point of accuracy and spirit. This well-written volume of blended science and story has been translated by Mr. Benjamin Bucknall, architect, under the title of Annals of a Fortress. The translator has reproduced the coloured map, showing the position—a real piece of country—upon which M. Le Due has planted his stronghold, and has also faithfully followed the excellent engravings which so materially assist the student and gratify the eye. But, admirable as the book is, one cannot help regretting that it was not found possible to take as a subject an authentic city, sad tell us what actually occurred,—how it was assailed, how defended, and thus exemplify by facts the growth of fortification. Probably, however, no stronghold has a history which illustrates all the phases of defence, such as would constitute anything like a complete account. One is remarkable for its natural, another for its artificial strength, and several for the devices invented on the spur of the moment to resist attack. By framing an imaginary edifice on a real site, M. Le Due has been enabled to include a greater variety of incidents, and thus make his history complete. M. Le Duo is an able engineer, a lucid and well-informed writer, and Mr. Bucknall is fairly warranted in regarding him with so much admiration. But when he says, in his "Translator's Note," that " it is not too much to assert that if his [M. Le Due's] recommendations had been carried out, the investment of Paris would have been impossible, whilst the progress of German invasion elsewhere would have been attended with greater difficulties," he carries his hero-worship great lengths. At the same time, it is a pity the course advocated by M. Le Dne—that of an active offensive- defensive—was not tried ; although had it been attempted and had failed, we should then have been duly informed by the critics apris coup that the reverse method was the one which should have been adopted. In his " M6moire Bur la D6fense de Paris," M. Le Duo did not suffi- ciently consider the quality of the so-called troops constituting the garrison, and he cut out work for them which they could not have performed, certainly not at the time when an investment might have been prevented. Had Marshal MacMahon led his 120,000 soldiers from Chalons to Paris, instead of from Rheims to Sedan, then the invest- ment of the capital would have been impossible ; and those who are really responsible for the surrender of Paris are the Bonapartist Regency and the Marshal who so weakly yielded to the selfish counsels of the Empress and Count Palikao.