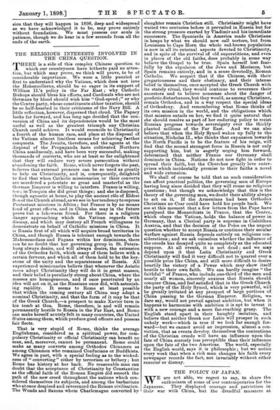 THE RELIGIOUS INTERESTS INVOLVED IN THE CHINA QUESTION. T HERE is

a side of this complex Chinese question to which our countrymen have hitherto paid no atten- tion, but which may prove, we think will prove, to be of considerable importance. We were a little puzzled at first to understand why the Vatican, which does not love the Hohenzollerns, should be so eager in its support of William II.'s policy in the Far East ; why Catholic Bishops should bless his efforts, and Cardinals who are not Germans by blood should wish him "God-speed ;" or why the Centre party, whose constituents abhor taxation, should be so half-hearted in their criticisms of the Navy Bill. A little reflection, however, dispersed that cloud. The Papacy looks far forward, and has long ago decided that the con- version of China and its dependencies would be the most useful as well as the greatest triumph any Christian Church could achieve. It would reconcile to Christianity a fourth of the human race, and place at the disposal of the Vatican almost limitless means for achieving farther conquests. The Jesuits, therefore, and the agents at the disposal of the Propaganda have cultivated Northern China assiduously, and have been very successful, making thousands of converts, who are at least so far enlightened that they will endure very severe persecution without abandoning the faith. Rome, which never forgets the past, believes that external pressure can be so used as greatly to help on Christianity, and is, consequently, delighted to find that when Catholic missionaries or their converts are murdered a potentate so great and masterful as the German Emperor is willing to interfere. France is willing, too ; in Tonquin she did great things ; and she is disposed, though agnostic at home, to play the ancient role of Eldest Son of the Church abroad, as we see in her tendency to repress Protestant missions in Africa; but France is by no means fund of great efforts, and in China she may in the future prove but a lukewarm friend. For there is a religious danger approaching which the Vatican regards with dismay, and which may destroy all French willingness to demonstrate on behalf of Catholic missions in China. It is Russia first of all which will acquire broad territories in China, and though Russia is tolerant enough towards the Mahommedans and Pagans within her dominions, there can be no doubt that her governing group in St. Peters- burg always desire, and will always desire, the extension of the Orthodox faith, which many of them believe with a certain fervour, and which all of them hold to be the key- stone of the unity and the separateness of Russia. All experienced missionaries believe that whenever the Asiatic races adopt Christianity they will do it in great masses, and their belief is peculiarly strong about China, where the masses are homogeneous, and if once penetrated by an idea will act on it, as the Russians once did, with astonish- ing rapidity. It seems to Rome at least possible that within the coming century all China may adopt a nominal Christianity, and that the form of it may be that of the Greek Church,—a prospect to make Xavier turn in his tomb at Goa. Rome, therefore, is and will remain permanently hostile to Russia in the Far East, and Rome can make herself acutely felt in many countries, the United St ates among them, which produce good officers and possess fair fleets.

That is very stupid of Rome, thinks the average Englishman, considered as a spiritual power, for com- pulsory Christianity or official Christianity can benefit no man, and, moreover, cannot be permanent. Rome could make as many converts among Orthodox Chinamen as among Chinamen who remained Confucians or Buddhists. We agree in part, with a special feeling as to the wicked- ness of "converting" either by terrorism or bribery ; but Rome has history at her back. No reasonable man can doubt that the acceptance of Christianity by Constantine as the official faith of the Roman Empire did smooth the path of the new creed throughout the nations which con- sidered themselves its subjects, and among the barbarians who at once despised and reverenced the Roman civilisation. The Wends and Saxons whom Charlemagne converted by slaughter remain Christian still. Christianity might have waited two centuries before it prevailed in Russia but for the strong pressure exerted by Vladimir and his immediate successors. The Spaniards in America made Christians in heaps by what we should now call torture, but from Louisiana to Cape Horn the whole red-brown population is now in all its external aspects devoted to Christianity, and in spite of the survival of old superstitions, and even in places of the old faiths, does probably in some way believe the Gospel to be true. Spain herself lost fear- fully by the expulsion of the Jews and Moriscos, but Spain remains entirely, and in a sense devotedly, Roman Catholic. We suspect that if the Chinese, with their gregariousness and their obstinacy, and their intense belief in themselves, once accepted the Greek Church with its stately ritual, they would continue to reverence their ancestors and to believe nonsense about the danger of geodetic disturbances, but they would, as among Christians, remain Orthodox, and in a way respect the special ideas of Orthodoxy. And remembering what Rome thinks of its own mission in the world, and the obligations which that mission entails on her, we find it quite natural that she should resolve as part of her enduring policy to resist Russian progress towards sovereignty over the thickly planted millions of the Far East. And we can also believe that when the Holy Synod wakes up fully to the situation, Nicholas II., who thinks that expansion towards the North Pacific is to be the feature of his reign, will find that the second strongest force in Russia is not only supporting him, but is eagerly urging him forward, determined that neither France nor Germany shall dominate in China. Nations do not now fight in order to spread their faith, but the Churches greatly love enter- prises which incidentally promise to their faiths a novel and wide extension.

We shall of course be told that no such consideration, can affect practical politics, the governing men of Europe having long since decided that they will rouse no religious questions ; but though we acknowledge that this is the theory of the governing men, we doubt their ability always to act on it. If the Armenians had been Orthodox Christians no Czar could have held his people back. We see at this moment that a few letters from the Pope have paralysed the Monarchists in France, that the Centre, which obeys the Vatican, holds the balance of power in Germany, that a Clerical party is supreme in Cisleithan Austria, and that the decision of the Poles on the urgent question whether to accept Russia or continue their secular warfare against Russia depends entirely on religious con- siderations; and we ask ourselves whether the influence of the creeds has decayed quite so completely as the educated suppose. At all events, it is not dead ; and we may depend upon it that Latin Christianity and Greek Christianity will find it very difficult not to quarrel over a possible prize like China, and still more difficult to desire heartily the victory of a Power which may show itself hostile to their own faith. We can hardly imagine "the faithful" of France, who include one-third of the men and nearly all women, sincerely anxious that Russia should conquer China, and feel satisfied that in the Greek Church the party of the Holy Synod, which is very powerful, will be greatly irritated at any prospect of large portions of China passing to the German Emperor. Religion, we dare say, would not prevail against ambition, but when it happens to harmonise with ambition it is apt to invest it with a new courage and a more far-reaching grasp. The English stand apart in their haughty isolation, and believe that neither Greek nor Latin will prosper in such unholy work—which is true if we look far enough for- ward—but we cannot avoid an impression, almost a con- viction, that as events develop themselves the contentions of the Christian creeds will have an influence upon the fate of China scarcely less perceptible than their influence upon the fate of the two Americas. The world, especially the English world, says it is philosophic ; but we notice every week that when a rich man changes his faith every newspaper records the fact, not invariably without either rancour or dismay.