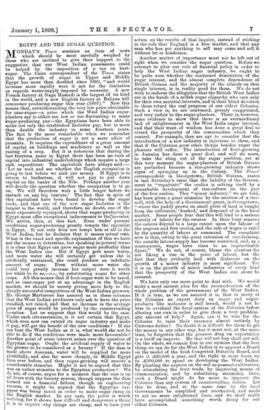 EGYPT AND THE SUGAR QUESTION.

MONDAY'S Times contains an item of news which should be most carefully weighed by those who are inclined to give their support to the suggestion that our West Indian possessions could be helped by the imposition of a tax on beet- sugar. The Cairo correspondent of the Times states that the growth of sugar in Upper and Middle Egypt has more than doubled since 1883, "and would increase more rapidly were it not for the limitation as regards water-supply imposed by necessity. A new French factory at Naga. Hamadi is the largest of its kind in the world, and a new English factory at Baliana will commence producing sugar this year (1897)." Now this means that, notwithstanding the very low price obtainable for cane-sugar—a price which the West Indian sugar- planters say is either too low or too fluctuating to make sugar-producing pay—the Egyptians have been able to make not only the established factories pay, but to more than double the industry in some fourteen years. The fact is the more remarkable when we remember that the production of sugar is not a mere affair of peasants. It requires the expenditure of a great amount of capital on buildings and machinery as well as the raising of a crop. But it is notorious that during the last fourteen years in Egypt there has been no rush of capital into industrial undertakings which require a large cash expenditure. The capitalists have always said Let us wait and see whether the English occupation is going to last before we sink our money. If Egypt is to return to barbarism, it will not pay to put down capital on the banks of the Nile. Perhaps another year will decide the question whether the occupation is to go on. We will therefore wait a little longer before we embark on any big venture.' The fact that in spite of this capitalists have been found to develop the sugar trade, and that one of the new sugar factories is the largest in the world, and therefore, no doubt, one of the most expensively equipped, shows that sugar-producing in Egypt must offer exceptional inducements to the:investor. We arrive, then, at this fact. Even under present conditions sugar-producing greatly tempts the capitalist in Egypt. It not only does not tempt him at all in the West Indies, but he declares that it means actual ruin. What is the exact and specific explanation of this we have not the means to determine, but speaking in general terms it is clear that Egypt can grow sugar more profitably than the West Indies can. But if Egypt gets more water, and more water she will certainly get unless she is artificially restrained, she could produce an indefinite amount of sugar. Even without more water she could very greatly increase her output were it worth her while to do so,—i.e., by substituting sugar for other crops. All this means that if beet-sugar were to be taxed, and so cane-sugar put at an advantage in the English market, we should be merely giving more help to the already successful competitors of the West Indian growers. Mr. George Martineau has assured us in these columns that the West Indian producers only ask to have the price steadied, not raised, and that no increase in the average price of sugar would be produced by the countervailing bounties. Let us suppose that this would be the case. Under such circumstances, is it not certain that Egypt, which even now can extend its sugar industry and make it pay, will get the benefit of the new conditions ? If she can beat the West Indies as it is, what would she not be able to do if the conditions were made more favourable ? Another point of some interest arises over the question of Egyptian sugar. Ought the artificial supply of water to the grower to be considered as a bounty ? If the dam is made above Assouan, water will be supplied far more plentifully, and also far more cheaply, to Middle Egypt than ever before, and thus sugar-growing will receive a considerable stimulus. Might it not be argued that this was an unfair stimulus to the Egyptian production ? We do not, of course, argue for a moment that the case is on all fours with the bounty system, though suppose the dam turned out a financial failure, though an engineering success, it might be argued that the Egyptian tax- payer was being taxed in order to make sugar cheap in the English market. In any case, the point is worth n. °tieing, for it shows how difficult and dangerous a thing it is to inquire why things are cheap, and to base your action on the results of that inquiry,,, instead of sticking to the rule that England is a free market, and that any man who has got anything to sell may come and sell it without let or hindrance.

Another matter of importance must not be left out of sight when we consider the sugar question. Before we attempt to alter our rule of financial policy in order to help the West Indian sugar industry, we ought to be quite sure whether the continued domination of the sugar interest, and the almost complete dependence of British Guiana and the majority of the islands on that single interest, is in reality good for them. We do not wish to endorse the allegation that the British West Indies are in the hands of a selfish sugar oligarchy who care only for their own material interests, and in their blind devotion to these retard the real progress of our oldest Colonies. Such a view is, we are convinced, grossly exaggerated, and very unfair to the sugar-planters. There is, however, some evidence to show that there is an extraordinary lack of enlightenment in the West India sugar interest, and that their want of wisdom has done a great deal to retard the prosperity of the communities which they control. For example, they are apt to consider that the introduction of a new industry is injurious to them, and that if the Colonies grow other things besides sugar the planters will suffer. The introduction of fruit-growing in Jamaica has done a great deal, and will do more, to take the sting out of the sugar problem, yet at this very moment the sugar-planters of British Guiana are perturbed because a. rice-growing industry shows signs of springing up in the Colony. The Times' correspondent in Georgetown, British Guiana, states in last Saturday's issue that the liability of the Govern- ment to "repatriate" the coolies is solving itself by a remarkable development of rice-culture on the part of the free coolies. This "minor industry," we are told, has been given a great stimulus by the erection of a rice- mill, with the help of a Government grant, in Georgetown, "where the paddy grown on small plots of land is bought from the cultivator, husked,' and disposed of in the local market. Some people fear that this will lead to a serious scarcity of labour for the estates. In their busy seasons the estates depend to a large extent upon the labour of the negroes and free coolies, and the rate of wages is ruled by the quantity of labour at command. The complaint now is that, owing to the great extension of rice-farming, the outside labour-supply has become restricted, and, as a consequence, wages have risen to an impracticable figure." We do not, of course, blame the planters for not liking a rise in the price of labour, but the fact that they evidently look with disfavour on the growth of a minor industry is most significant. Yet it is on the growth of minor industries of every kind that the prosperity of the West Indies can alone be assured.

We have only one more point to deal with. We would make a most earnest plea for the reconsideration of the whole problem of the government of the West Indies. If it is true, as we are assured it is, that in many of the Colonies an export duty on sugar and sugar- products like molasses is still levied, would it not be wise to overhaul the fiscal system of the Colonies before altering our own in order to give them a very problem- atic amount of help ? Again, can it be wise for the Colonies to raise their revenues almost entirely by Customs-duties ? No doubt it is difficult for them to get the money in any other way, but it must not, at the same time, be forgotten that the greatest drag on exportation is a tariff on imports. He that will not buy shall not sell. On the whole, we remain firm in our opinion that the best thing we can do for the West Indies is to appoint a Board on the model of the Irish Congested Districts Board, and give it .240,000 a year, and the right to raise loans up to £300,000 to spend on developing the West Indies. By planting the negroes on the soil as peasant-cultivators, by stimulating the fruit trade, by improving means of communication, and by subsidising steamship lines, such a Board might do far more to improve the Colonies than any system of countervailing duties. Let this be done, and at the same time let the local Governments be simplified and overhauled, and made to act on more enlightened lines, and we shall really have accomplished something worth doing for our oldest Colonies.