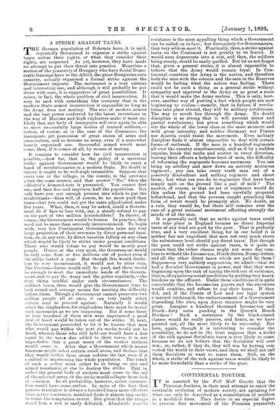 Page 16, 1 January 1898 — A STRIKE AGAINST TAXES. T HE German population of Bohemia have,
Close

A STRIKE AGAINST TAXES. T HE German population of Bohemia have,

it is said, repeatedly threatened to organise a strike against taxes unless their rights, or what they consider their rights, are respected. As yet, however, they have made no attempt to put their threat into practice. Meantime a section of the peasantry of Hungary who have Social Demo- cratic leanings have in the Alfold, the great Hungarian corn country, actually organised a formal strike against the Government imposts. The movement is a very curious and interesting one, and although it will probably be put down with ease, it is suggestive of great possibilities. It raises, in fact, the whole problem of civil insurrection. It may be said with something like certainty that in the modern State armed insurrection is impossible as long as the Army does not mutiny. The size of modern armies and the vast power conferred by the latest inventions in the way of Maxims and high explosives make it most un- likely that any body of insurgents will ever again be able to meet successfully large bodies of trained soldiers.— .unless, of course, as in the case of the Commune, the insurgents get possession of great stores of arms and ammunition, and so become an army, even if a somewhat loosely organised one. Successful armed revolt must come, then, if it comes at all, by means of mutiny.

It remains to consider how far civil insurrection is possible,—how far, that is, the policy of a universal strike against Government would be likely to carry a band of revolutionaries in a modern State. No doubt in theory it ought to be well-nigh irresistible. Suppose that every one in the village, in the county, in the province gives the same answer, and that answer "No," when the • collector's demand-note is presented. You cannot first sue, and then fine and imprison, half the population. Not only have you not enough prisons into which to put the recalcitrants—fines will, of course, be no more paid than taxes—but you could not get the cases adjudicated under five years. What, then, it may be asked, could a Govern- ment do if face to face with, say, a steady refusal to pay on the part of two million householders ? In theory, of course, the Government would be beaten. In practice, they need not be more than seriously inconvenienced. To begin with, very few Continental Governments raise any very large proportion of their revenues by direct personal taxa- tion, or, at any rate, by direct taxation falling on any class which would be likely to strike under present conditions. Those who would refuse to pay would be mostly poor people. Hence, at the very most, the Government would be only some four or five millions out of pocket even if .the strike lasted a year. But though this would doubt- -less be very inconvenient, it would not be utter ruin. The Customs-duties would still be paid, and there would be enough to meet the immediate needs of the Govern- ment and to pay the Army and the police regularly,—the ,first thing needful under such circumstances. The indirect taxes, then, would give the Government time to look round and arrange means for meeting the difficulty before them. Though a Government cannot prosecute two million people all at once, it can very easily select certain men to proceed against. Naturally it would select the ringleaders, for ringleaders there must be in any such movement as we are supposing. But if some three or four hundred of these men were imprisoned a good Ileal of heart would be taken out of the strike. If, next, the Government proceeded to let it be known that men who would pay within the next six weeks would not be fined, whereas those who still held out would have a fine equal to the taxes due added to their taxes, it is not improbable that a great many of the weaker strikers would come in. After that a Government which meant business might select certain small areas, and declare that they would within these areas enforce the law, even if it esulted in imprisoning the whole population. The result of such a policy must either be to bring on riot and armed resistance or else to destroy the strike. That is, either the general body of strikers must come to the aid of the selected areas, or the strike would collapse from lack of cohesion. In all probability, however, active insurrec- tion would have come earlier. In spite of the fact that passive resistance is always a hundred times more effective than active resistance, mankind finds it almost impossible to resist the temptation to riot. But given that the troops sta ild firm, a riot is easily defeated. Absolutely passive resistance is the most appalling thing which a Government can be called on to face ; but fortunately for Governments, they very seldom meet it. Practically, then, a strike against taxes on the Continent is not greatly to be feared. It would soon degenerate into a riot, and then, the soldiers being steady, would be easily quelled. But let us not forget that, given a general strike, it is almost impossible to believe that the Army would remain loyal. In Con- tinental countries the Army is the nation, and therefore both the men with the colours and the men in the Reserves would be feeling what the nation was feeling. There could not be such a thing as a general strike without sympathy and approval in the Army on so great a scale that it would make the Army Useless. This is only, how- ever, another way of putting a, fact which people are now beginning to realise,—namely, that in future, if revolu- tions take place abroad, they will be military revolutions. The way to revolt lies through the Army. No doubt discipline is so strong that it will prevent minor and partial revolutions ; but given something which would stir the whole of the /ewer class at the same moment and with great intensity, and neither Germany nor France nor Austria could resist the movement. Even military discipline finds it almost impossible to deal with certain forms of outbreak. If the men in a hundred regiments all over the country simultaneously, and as if by a sudden impulse, break the ranks and scatter in every direction, leaving their officers a helpless knot of men, the difficulty of reforming the regiments becomes enormous. You can bring up artillery and mow down an actively mutinous regiment ; you can take every tenth man out of a passively disobedient and sulking regiment and shoot them ; but what can you do to regiments that have been simply spilt on the ground like a pail of milk ? The answer, of course, is that no set of regiments would do this unless the ground had been carefully prepared beforehand, and that the persons caught preaching this form of revolt would be promptly shot. No doubt, as a rule, they would be, but there still remains over the case of a great national movement affecting strongly the minds of all the men.

It is generally said that no strike against taxes could ever take place in England because no direct Imperial taxes of any kind are paid by the poor. That is perfectly true, and a very excellent thing, for in our belief it is neither fair nor expedient that men not very much above the subsistence level should pay direct taxes. But though the poor could not strike against taxes, is it quite so certain that the richer classes might not some day com- bine to withold the Income-tax, Death-duties, Stamp-duties, and all the other direct taxes which are paid by them ? Suppose—a very unlikely supposition, we admit—that we had a Socialist Government in power, and that they were beginning upon the task of taxing the rich out of existence, that is, of equalising social conditions by putting very heavy burdens on the affluent. Under these conditions it is quite conceivable that the Income-tax payers and the executors would combine, and refuse to pay their taxes. If they did, and if the Courts of Law and our legal system remained unchanged, the embarrassment of a Government depending, like ours, upon direct taxation might be very great. Imagine a hundred thousand Income-tax and Death - duty suits pending in the Queen's Bench Division ! Such a resistance by the black-coated classes would be really passive, and hence, as we have pointed out, all the more likely to be successful. But here, again, though it is interesting to consider the possibility, we do not in the least suppose that a strike of the rich against Socialistic taxes is ever likely to come, because we do not believe that the Socialists will ever win ; or, rather, if they do, they will win by having con- verted the world to their views, and then we shall not call them Socialists or want to resist them. Still, on the whole, a strike of the rich against taxes would be likely to be more formidable than a strike of the poor.