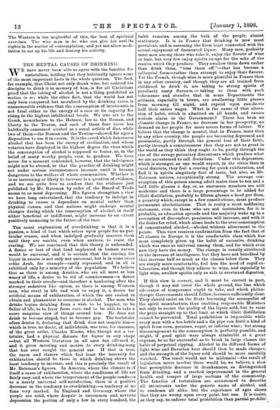 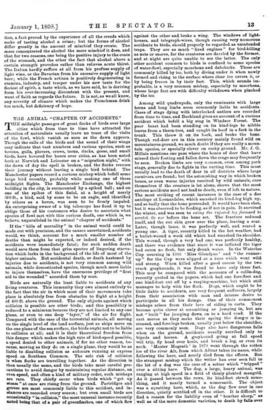 THE MFSTAL CAUSES OF DRINKING.

WE have never been able to agree with the fanatics for teetotalism, holding that they habitually ignore some of the most important facts in the whole question. The fact, for example, that Christ not only drank wine, but ordered his disciples to drink it in memory of him, is for all Christians proof that the taking of alcohol is not a thing prohibited as malum in Se; while the other fact, that the world has not only been conquered but moralised by the drinking races, is unanswerable evidence that the consumption of intoxicants is not fatal either to the energy of a race or its capacity for rising to the highest intellectual levels. We owe art to the Greek, monotheism to the Hebrew, law to the Roman, and liberty to the Teuton, and each of those four races has habitually consumed alcohol as a usual article of diet, while two of them—the Roman and the Teuton—showed for ages a disposition to use it in excess. It is the creed which denounces alcohol that has been the enemy of civilisation, and whose votaries have displayed in the highest degree the vices which the consumption of alcohol is supposed to foster, or, in the belief of many worthy people, even to produce. We have never for a moment contended, however, that the indulgence might not be abused, or that the practice of drinking might not under certain circumstances increase until it became dangerous to the welfare of whole communities. Whether it is so increasing or likely to increase is a question of evidence, and we are quite free to confess that the evidence just published by Mr. Bateman by order of the Board of Trade seems to us most depressing. His figures strengthen a view we have long entertained, that the tendency to indulge in drinking to excess is dependent on mental rather than physical causes, and that nations might undergo mental changes during which the consumption of alcohol, in itself either beneficial or indifferent, might increase to an extent positively menacing to the future of the race.

The usual explanation of overdrinking is that it is a passion, a kind of lust which seizes upon people for no par- ticular reason, and when indulged gradually masters them until they are unable, even when anxious, to resist the craving. We are convinced that this theory is unfounded. A. desire or lust of that kind implanted in human nature would be universal, and it is certain that the craving for liquor in excess is not only not universal, but is in some races —the Arab, for example—easily repressed, and in all is exhibited only by a minority of the population. We believe that as there is among Asiatics, who are all more or less weary of life, a desire to be rid of consciousness—a desire marked in their creeds—and therefore a hankering after the stronger sedatives like opium, so there is among Western men, who revel in life and wish to enjoy it, a desire for artificial means of exhilaration, of which the one easiest to obtain and pleasantest to consume is alcohol. The man who drinks begins drinking from a wish to be happier, to be fuller of life, to be freer from care, and to be able to take a more sanguine view of things around him. He does not drink to become stupid, but to become gay. The teetotaler often denies it, declaring that drink dues not inspirit him— which is true, no doubt, of individuals, was true, for instance, of the great artist, Charles Keene, who, though not a tee- totaler, had a physical distaste for liquor in any shape .--bat all Western literature in all ages has affirmed it, and it gives meaning and motive to every drinking-song that has ever caught the general ear. If that is true, the races and classes which feel least the necessity for exhilaration should be those in which drinking shows the least tendency to increase, and this is precisely the result of Mr. Bateman's figures. In America, where the climate is of itself a cause of exhilaration, where the conditions of life are fairly easy, and where the temperament of the people conduces to a nearly universal self-satisfaction, there is a positive decrease in the tendency to overdrinking,—a tendency at no time very marked. In England and Germany, where the people are solid, where despair is uncommon and nervous tiepression the portion of only a few in every hundred, the habit remains, among the balk of the people, almost stationary. It is in France that drinking is now most prevalent, and is assuming the form least connected with the actual enjoyment of fermented liquor. Many men, probably most men among those who take it, enjoy the flavour of wine or beer, but very few enjoy spirits except for the sake of the results which they produce. They swallow them down rather than drink them, "toss them off "—that has become a colloquial form—rather than attempt to enjoy their flavour. Yet the French, though wine is more plentiful in France than in any other country, and though they are all trained from childhood to drink it, are taking to strong spirits of peculiarly nasty flavours,— taking to them with puch vehemence and abandon that in some Departments the artisans, especially in towns, are swallowing little glasses from morning till night, and expend upon eau-de-vie half their entire wages. What is the cause of that altera- tion of habit, which is admitted on all hands, and causes serious alarm to the Government ? There has been no climatic change in France, no decrease in her prosperity, no demand on her people for more severe forms of labour. We believe that the change is mental, that in France, more than in any other country, the people are becoming depressed and pessimistic, partly through the general loss of their faith, partly through a consciousness that they are not as great in the world as they think they ought to be, partly through the rise of the savage pecuniary discontents which produce what we are accustomed to call Socialism. Under this depression, which is stronger, as one would expect, in the cities than in rural districts, they feel a craving for quick exhilaration, and find it in spirits singularly foul of taste, but also, as Mr. Bateman notices, exceptionally strong. The average con- sumption of this poison among adult males rises to ten and a half little glasses a day, or, as enormous numbers are still moderate and there is a large percentage to be added for illicit distillation, probably to fifteen glasses a head per diem, a quantity which, except in a few constitutions, must produce permanent alcoholisation. That is really a most saddening statement, even to those who are not teetotalers, for it is probable, as education spreads and the majority wake up to a perception of discomfort, pessimism will increase, and with it the desire for relief, which alone leads to the over-consumption of concentrated alcohol,—alcohol without allurement to the palate. This view receives confirmation from the fact that of all classes in Europe it is the comfortable class which has most completely given up the habit of excessive drinking which was once so universal among them, and for which even now they have the money. The change is usually attributed to the increase of intelligence, but they have not benefited by that increase half so much as the classes below them. They are simply more comfortable, feel less the need of rapid ex- hilaration, and though they adhere to wine, and especially to light wine, swallow spirits only as aids to overtaxed digestion.

If this view is correct, and it must be correct in part, though it may not cover the whole ground, the line which advocates of temperance ought to take, and which philan- thropic Governments should follow, becomes sufficiently clear. They should insist on the State becoming the monopolist of the spirit manufacture, thus enabling responsible Ministers not only to secure the quality of the liquor sold, but to raise the price straight up to that limit at which illicit distillation cannot be prevented. Total prohibition is impossible while every man with a tea-kettle and a tin pipe can distil a kind of spirit from corn, potatoes, sugar, or inferior wine ; but strong discouragement to the consumption is perfectly possible, and might, if good spirit were always attainable at a great expense, be so far successful as to break in large classes the habit of perpetual sipping. Alcohol in its diffused forms of light wine and Bavarian beer should then be made cheaper, and the strength of the liquor sold should be more carefully watched. The result would not be millennial—the result of legislation never is—but there would be, we believe, a slow but perceptible decrease in drunkenness, as distinguished from drinking, and a marked improvement in the general health and temper of large sections of the community. The fanatics of teetotalism are accustomed to describe all intoxicants under the generic name of alcohol, and to condemn all alike, but the experience of ages shows that they are wrong upon every point but one. It is easier, as they say, to enforce total prohibition than partial prohibi-

tion, a fact proved by the experience of all the creeds which make of tasting alcohol a crime; but the forms of alcohol differ greatly in the amount of mischief they create. The more concentrated the alcohol the more mischief it does, and that for two reasons, one being the positive injury to the coats of the stomach, and the other the fact that alcohol above a certain strength provokes rather than relieves acute thirst. The Italian hardly suffers at all from his profuse supply of light wine, or the Bavarian from his excessive supply of light beer; while the French artisan is positively degenerating in stamina, industry, and temper under his new taste for the fieriest of spirit, a taste which, as we have said, he is deriving from his ever-increasing discontent with the present, and want of faith as regards the future. It is not, as we all know, any severity of climate which makes the Frenchman drink too mach, but deficiency of hope.