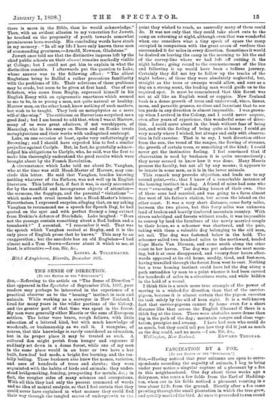 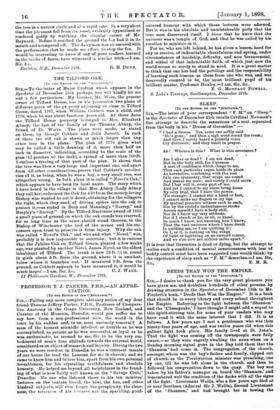 FASCINATION BY A FOX.

Sin,—Having noticed that your columns are open to corre- spondents recording the sagacity of animals, I beg to bring under your notice a singular capture of a pheasant by a fox in this neighbourhood. One day about three weeks ago a dairyman, who rents a few fields from the Earl of Hadding- ton, when out in his fields noticed a pheasant roosting in a tree about 12 ft. from the ground. Shortly after a fox came prowling through the small plantation in which the tree grew, and quickly marked the bird. At once it proceeded to run round the tree in a narrow circle and at a rapid rate. In a very short time the pheasant fell from its roost, evidently hypnotised or rendered giddy by watching the circular career of Mr. Reynard. Before it reached the ground the fox had it in its mouth and scampered off. The dairyman was so amused with the performance that he made no effort to stop the fox. It would be interesting to know if any of your readers, learned in the tricks of foxes, have witnessed a similar trick.—I am, Sir,