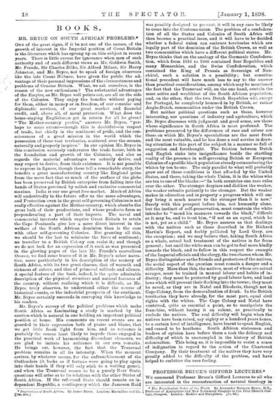 ONE of the great signs, if it be not one of the causes, of the growth of interest in the Imperial position of Great Britain is the literature which has sprung np on this subject in recent yenta. There is little excuse for ignorance when men of such authority and of such different views as Mr. Goldwin Smith, Mr. Fronde, Sir Charles Dilke, Sir Alfred Milner, Sir Harry Johnston, and Mr. Bryce, not to speak of foreign observers like the late Count Hubner, have given the public the ad- vantage of their personal impressions of the circumstances and problems of Greater Britain. What, we ask ourselves, is the reason of the new enthusiasm ? The substantial advantages of the Empire, as Mr. Bryce well points out, are all on the side of the Colonies. They enjoy the benefits without paying for them, either in money or in freedom, of our consular and diplomatic services, of our great market and financial credit, and, above all, of naval protection. What does the home-staying Englishman get in return for all he gives? "The Mother-country profits," answers Mr. Bryce, "per- haps to some extent—though this is doubtful—in respect of trade, but chiefly in the sentiment of pride, and the con- sciousness of a great mission in the world which the possession of these vast territories, scattered over the oceans, naturally and properly inspires." In our opinion Mr. Bryce in this conclusion seriously underrates the trade factor, both in the foundation and growth of the Colonies, and also as regards the material advantages we actually derive, and may expect to derive, from their existence. It is not possible to express in figures, though these tell a remarkable story, the benefits a great manufacturing country like England gains from the mere fact that so much of the surface of the globe has been preserved by British enterprise from falling into the hands of States governed by selfish and exclusive commercial maxims. India is our one great free market. Much of Africa will undoubtedly in the future offer us the same advantages, and Protection even in the great self-governing Colonies is not really effective against the Mother-country, which absorbs the great bulk of their productions, and whose products form so preponderating a part of their imports. The naval and commercial interests which require Great Britain to retain the Cape Peninsula give her a more direct interest in the welfare of the South African dominion than is the case with other self-governing Colonies. But granting all this, we should be the last to minimise the force of sentiment; no traveller to a British Colony can resist it; and though we do not look for an expression of it such as was presented in the glowing pages of the late Mr. Fronde's marvellous Oceana, we find some traces of it in Mr. Bryce's sober narra- tive, more particularly in his description of the scenery of South Africa, with its two great charms, that of warmth and richness of colour, and that of primeval solitude and silence. A special feature of the book, indeed, is the quite admirable description of the physical structure and natural features of the country, without realising which it is difficult, as Mr. Bryce truly observes, to understand either the course of historical events, or the industrial prospects of the continent. Mr. Bryce certainly succeeds in conveying this knowledge to his readers.

Mr. Bryce's survey of the political problems which make South Africa so fascinating a study is marked by the caution which is natural in one holding an important political position at home. His comments on recent events are so guarded in their expression both of praise and blame, that we get little fresh light from him, and as reticence is probably the course least likely to impede those engaged in the practical work of harmonising discordant elements, we are glad to imitate his reticence in our own remarks. He brings out, however, the fact that the Transvaal problem remains in all its intensity. When the moment arrives, by whatever means, for the enfranchisement of the Outlanders (it looks as if fortune were going to play again into their hands if they will only stick to a waiting game), and when the Transvaal ceases to be a purely Boer State, questions will arise as to its relations with the other States of South Africa. If the reformed State should remain an in- dependent Republic, a contingency which the Jameson Raid

• Impressions of South Africa. By James Bryce. London: Macmillan and Co. (14a. net.1

was possibly designed to prevoat, it will in any case be likely to come into the Customs union. The problem of a confedera- tion of all the States and Colonies of South Africa will then become a practical issue, and it will have to be decided whether a federal union can embrace territories which are legally part of the dominion of the British Crown, as well as two communities which have a different political status. Mr. Bryce thinks that on the analogy of the Germanic Confedera- tion, which from 1816 to 1866 contained four Republics and many Monarchies, and the Swiss Confederation, which contained the King of Prussia as Sovereign of Neu- chfitel, such a solution is a possibility; but constitu- tional precedent will have much less to say to the answer than practical considerations, among which may be mentioned the fact that the Transvaal will, on the one hand, contain the most active and wealthiest of the South African population, and, on the other, that the two Dutch Republics will, except for Portugal, be completely hemmed in by British, or rather Anglo-Dutch, communities under the British Crown.

But neither political questions such as these, however interesting, nor questions of industry and agriculture, which Mr. Bryce discusses with judgment and good sense, are those whose significance in South Africa is most profound. The problems presented by the differences of race and colour are those on which Mr. Bryce's speculations are the most fresh and the most valuable, and he has done a real service in draw- ing attention to this part of the subject in a manner so full of suggestion and forethought. The friction between Dutch and English sinks into insignificance beside the startling reality of the presence in self-governing British or European Colonies of a prolific black population already outnumbering the whites by ten to one. The only parallel to what will probably grow out of these conditions is that afforded by the United States, and there, taking the whole Union, it is the whites who are ten to one of the blacks:—" In both countries one race rules over the other. The stronger despises and dislikes the weaker, the weaker submits patiently to the stronger. But the weaker makes in education and in property a progress which will one day bring it much nearer to the stronger than it is now." Surely with this prospect before him, not humanity alone, but the instinct of self-preservation, must constrain the white intruder to "mend his manners towards the black," difficult as it may be, and to treat him, "if not as an equal, which he is not, yet as a child." Mr. Bryce assures us that dealings with the natives such as those described in Sir Richard Martin's Report, and feebly palliated by Lord Grey, are the exception; and we may believe that, taking South Africa as a whole, actual bad treatment of the natives is far from general ; but until the white man can be got to feel more kindly towards the black, and to follow in this respect the example of the Imperial officials and the clergy, the two classes whom Mr. Bryce distinguishes as the friends and protectors of the natives, the social aspect of the question must remain a danger and a difficulty. More than this, the natives, most of whom are actual savages, must be trained in manual labour and habits of in- dustry; they must be protected by good labour laws, and land laws which will prevent their flocking into the towns; they mast be saved, as they are in Natal and Rhodesia, though not in Cape Colony, from the demoralisation of drink. In the British territories they have already, for the most part, equal civil rights with the whites. The Cape Colony and Natal have contrived, quite as essential a point, so to manipulate the franchise, without basing it on colour, as practically to exclude the natives. The real difficulty will begin when the natives have been raised, say eighty or a hundred years hence, to a certain level of intelligence, have learnt to speak English, and ceased to be heathens. South African statesmen and leaders of opinion have before them a task the delicacy and difficulty of which is unexampled in the history of British colonisation. This being so, it is impossible to resist a sense of indignation in regard to the action of the Chartered Company. By their treatment of the natives they have very greatly added to the difficulty of the problem, and have helped to embitter the race feeling.