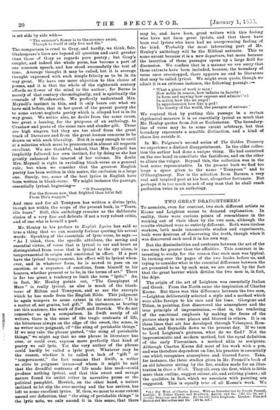 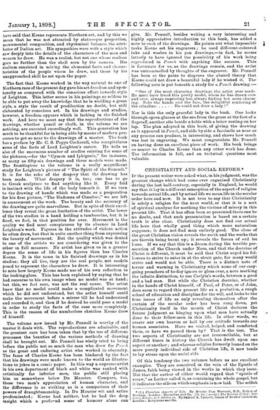 Page 28, 1 January 1898 — TWO GREAT DRAUGHTSMENA To associate, even for contrast, two such
Close

TWO GREAT DRAUGHTSMENA To associate, even for contrast, two such

different artists as Keene and Leighton seems to demand explanation. In reality, there were curious points of resemblance in the working out of their ideas by the two men, although the results obtained were so entirely different. Both were tireless workers, both made innumerable studies and experiments, both were desirous of discovering the truth, though when it was discovered each used it in his own way.

But the dissimilarities and contrasts between the art of the two were far greater than the affinities. This contrast is in- teresting to study, for the reason that each man was typical. In turning over the pages of the two books before us, and trying to consider what is the essential difference between the art presented to us by each man, we are struck by the fact that the great barrier which divides the two men is, in fact, the Alps.

The origin of the art of Leighton was essentially Italian and Greek. From the North came the inspiration of Charles Keene. But there was this difference between the two men, —Leighton deliberately selected a style and a method which were alike foreign to his race and his time. Giorgone and Titian, in painting, first discovered the atmosphere and the true principle of impressionism, — that is, the rendering of the emotional emphasis by making the focus of the picture sharp in some places and blurred in others. It is on these lines that art has developed through Velasquez, Rem- brandt, and Reynolds down to the present day. If we turn to Lord Leighton's pictures, what do we find ? Not the impressionistic and modern method, but the equal definition of the early Florentines, a method akin to scalpture. Although Charles Keene did most of his work with a pen, and was therefore dependent on line, his practice is essentially one which recognises atmosphere and blurred focus. Take, for instance, the three studies given in Mr. Pennell's book of an old labourer sitting by the fire, studies made for an illus- tration in Once a Week. They all, even the first, which is little more than outline, suggest colour, air, and retiring planes ; all the qualities, in fact, which we associate with painting are suggested. This is equally true of all Keene's work. We • (1.) Ti. Work of Charles Isms. With an Introduction by Joseph Pennell. London: T. Fisher Unwin and Bradbury. Agnew, and Co. [53 13s. 6d. net ] —(2.) Drowtngs and Studies. By the late Lord Leighton, London: Fine-Ars Society and Macmillan and Co. L54 4s. net.1

have said that Keene represents Northern art, and by this we mean that he was not attracted by statuesque proportion, monumental composition, and rhythmical balance, the attri- butes of Italian art. His sympathies were with a style which saw deeply into the details of the characters of the men and women he drew. He was a realist, but not one whose realism goes no further than the shell seen by the camera. His realism consisted in seizing the elemental facts and charac- teristics of the people whom he drew, and these by his unapproached skill he set upon the paper.

The fact that Keene worked in the way natural to one of Northern race of the present day gave his art freedom and spon- taneity as compared with the conscious effort towards style of Leighton. This latter seems in his paintings so seldom to be able to put away the knowledge that he is wielding a great style, a style the result of predilection no doubt, but still elaborated by conscious art. In his drawings and studies, however, a freedom appears which is lacking in the finished work. And here we must say that the reproductions of the drawings, whether pencil or chalk, in the volume we are noticing, are executed exceedingly well. This generation has much to be thankful for in being able by means of modern pro- cesses to get so near to the drawings of a master. The book has a preface by Mr. C. S. Pepys Cockerell, who recapitulates some of the facts of Lord Leighton's career. He tells us also of the enormous number of studies existing for some of the pictures,—for the 'Cymon and Iphigenia," for instance, as many as fifty-six drawings and three models were made. The frontispiece to the volume is a really magnificent study for Leighton's picture of "The Spirit of the Summit," it is for the sake of the drapery that the drawing has been made. What drapery it is, too; one has to go to Greek sculpture to find anything like it. Every fold is instinct with the life of the body beneath it. If we turn to the drawing of hands which was made as a preparation for his first picture, "The Madonna of Cimabue," we are left • in amazement at the work. The beauty and the accuracy of the drawing are quite marvellous. But in spite of their excel- lence they reveal the great limitation of the artist. The lower of the two studies is a hand holding a tambourine, but it is fixed, we feel, in that position for ever. Movement is the quality we find most conspicuous by its absence in Lord Leighton's work. Figures in the attitudes of violent action he often drew, but that is quite another thing from expressing the beauty of movement. But the quality which was denied to one of the artists we are considering was given to the other in full measure. No artist has given us in a greater degree the sense of life in his figures than has Charles Keene. It is the same in his finished drawings as in his studies; they all live, they are the real people, not models posed to represent the characters he drew. It is interesting to note how largely Keene made use of his own reflection in the looking-glass. This has been explained by saying that he had recourse to his own image when no model was at hand; but this, we feel sure, was not the real cause. The artist knew that no model could make a complicated movement which he did not understand, but the artist himself could make the movement before a mirror till he had understood and recorded it, and then if he desired he could pose a model in order to study the facts of the case more completely. This is the reason of the numberless sketches Keene drew of himself.

The volume now issued by Mr. Pennell is worthy of the master it deals with. The reproductions are admirable, and the greatest care has been taken that by the use of different processes the beauties of the various methods of drawing shall be brought out. Mr. Pennell has wisely tried to bring before the public not so much the man who drew for Punch as the great and enduring artist who worked in obscurity. The fame of Charles Keene has been hindered by the fact that his drawings were made known to the world as illustra- tions to jokes in a comic paper. In this way a supreme artist in his own department of black and white was ranked with artistically far inferior men, the public still placing him as somewhere below Da Maurier. Compare, too, these two men's appreciation of human character, and the difference is as striking as is a comparison of their powers of draughtsmanship. In Da Maurier wit and satire predominated ; Keene had neither, but he had the deep insight which a proforind sense of humour alone can give. Mr. Pennell, besides writing a very interesting and highly appreciative introduction to this book, has added a note to each of the drawings. He points out what impossible tasks Keene set his engravers ; he used different-coloured inks and washes in his pen drawings,—in fact, he seems latterly to have ignored the possibility of his work being reproduced in Punch with anything like success. This is fortunate for us, as the drawings remain, and the artist was untrammelled by thoughts of the engraver. Mr. Pennell has been at the pains to disprove the absurd theory that Keene could not draw a beautiful lady if he wished it. The following note is put beneath a study for a Punch drawing

One of the most charming drawings the artist ever made. He must have loved this pretty model, whom he has drawn ovet and over, always improving her, always finding her more charm- ing. Note the hands and the face, the delightful rendering of

the crinoline He could not draw a lady !"

Nor is this the only graceful lady in the book. One looks through opera-glasses at the sea from the grass at the foot of a flagstaff, another sits beside a table with a letter resting on her lap. The plan adopted in this book, of giving the drawing as it appeared in Punch, and side by side a facsimile as near as any process can produce, is interesting, and shows how much was lost in engraving. We must congratulate Mr. Pennell on having done an excellent piece of work. His book brings us nearer to Charles Keene than any other work has done.

The information is full, and on technical questions most valuable.