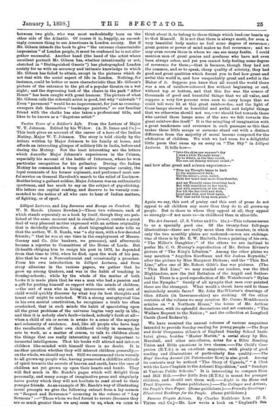 Twelve Years of a Soldier's Life. From the Letters of

Major W. T. Johnson. Edited by his Widow. (A. D. hums and Co.) — This book gives an account of the career of a hero of the Indian Mutiny, Major W. T. Johnson. The story is told chiefly by the letters written by Major Johnson to his family at home, and affords an interesting glimpse of military life in India, before and during the Mutiny. Not the least interesting are the letters which describe Major Johnson's experiences in the Crimea, especially his account of the battle of Inkerman, where he won particular recognition for his gallantry. During the Indian Mutiny he commanded a troop of native irregular cavalry, the loyal remnants of his former regiment, and performed most use- ful service on General Havelock's march to the relief of Luclmow. Besides being a gallant soldier, Major Johnson was an enthusiastic sportsman, and has much to say on the subject of pig-sticking. His letters are capital reading, and deserve to be warmly com- mended to the notice of all who care to hear of Indian matters, of fighting, or of sport.