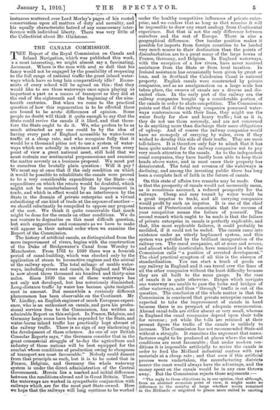 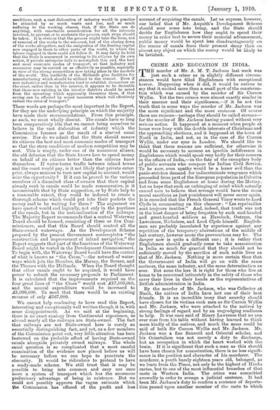 Page 13, 1 January 1910 — THE CANALS COMMISSION. T HE Report of the Royal Commission on
Close

THE CANALS COMMISSION. T HE Report of the Royal Commission on

On this state of affairs two remarks may be made. One is that the prosperity of canals would not necessarily mean, as is sometimes assumed, a reduced prosperity for the railways. Cheap and easy transit by water would be a great impetus to trade, and all carrying companies would profit by such an impetus. It is one of the chief heresies of Protectionist economists that the success of your competitor means the failure of yourself. The second remark which ought to be made is that the failure of private enterprise in canals is perfectly explicable, and that, like most explicable failures, it could probably be modified, if it could not be ended. The canals came into existence under an utterly haphazard system, and this system was petrified by the brilliant inauguration of the railway era. The canal companies, all at sixes and sevens, and almost wholly inarticulate, have remained in what the Commission calls " a position of arrested development." The chief practical symptom of all this is the absence of standardisation. You can start a truck of goods on any railway in England and it can travel over the lines of all the other 'companies without the least difficulty because they are all built to the same gauge. In the case of canals it is quite otherwise. Barges which navigate one waterway are unable to pass the locks and bridges of other waterways, and thus " through " traffic is out of the question. The conclusion of the whole matter is that the Commission is convinced that private enterprise cannot be expected to take the improvement of canals in hand because there is no prospect of adequate remuneration. Abroad canal-tolls are either absent or very small, whereas in England the canal companies depend upon their tolls for revenue ; yet while the tolls are retained at their present figure the traffic of the canals is unlikely to increase. The Commission has not recommended State-aid without a struggle. It examines the argument that manu- factures ought to be produced at places where the natural conditions are most favourable ; that under modern con- ditions it is impossible artificially to revive the canals in order to feed the Midland industrial centres with raw materials at a cheap rate ; and that even if this artificial process were undertaken, the manufacturing districts nearer the coast would always have the advantage, and the money spent on the canals would be in any case thrown away. But the Commission rejects these arguments :- " The reply to these objections is, in our opinion, that although, from an abstract economic point of view, it might make no difference to the country at large whether works remained in the Midlands or migrated to places more suited to existing conditions, such a vast dislocation of industry would in practice be attended by so much waste and loss, and so much suffering to the working classes, that., if the State can do anything, with reasonable consideration for all the interests involved, to prevent or to moderate the process, such steps should be taken. It is obvious that the process might take the form, not of removal of the works to the sea-coast, but of the closing down of the works altogether, and the emigration of the floating capital now engaged in them to other parts of the world, to which the labour engaged in them could not follow it. It may fairly be held that the State is concerned in ensuring to its citizens by its own action, if private enterprise fails to accomplish this end, the best and most economic modes of transport, so that industry and commerce may be carried on as effectively as possible, especially in view of tho strong competition now taking place in tho markets of the world. The coalfields of the Midlands give facilities for manufacturing which should be utilised to the utmost. Even if new industries and manufactories tend to establish themselves on the coast, rather than in the interior, it appears to be desirable that those now existing in the interior districts should be saved from the uprooting which apparently threatens them, if that saving can be effected by sound measures which will effectively reduce the rates of transport."

These words are perhaps the most important in the Report, for they are the underlying principle on which the majority have made their recommendations. From this principle, as such, we must wholly dissent. The canals have so long been comparatively idle that we cannot bring ourselves to believe in the vast dislocation of industry which the Commission foresees as the result of a starved canal service. Nor do we admit that the State should ensure its citizens the best and most economic modes of transport so that the stern conditions of modern competition may be met. This is simply, under one of its numerous aliases, the old delusion that the State knows how to spend money on behalf of its citizens better than the citizens know themselves. If water-borne traffic between inland towns and the coast would pay, is it not likely that private enter- prise, always anxious to turn new capital to account, would seize the opportunity ? If it can be proved to the various members of a disunited class of owners that their capital already sunk in canals could be made remunerative, is it inconceivable that by State suggestion, or by State help to a reasonable extent, they could be induced to create a thorough scheme which would put into their pockets the money said to be waiting for them ? The argument we have quoted would end logically, not only in the purchase of the canals, but in the nationalisation of the railways. The Majority Report recommends that a central Waterway Board should be formed, consisting of three or five Com- missioners, and that this Board should control all the State-owned waterways. As the Development Scheme proposed by the present Government contemplates "the construction and improvement of inland navigation," the Report suggests that part of the functions of the Waterway Board might be vested in the Development Commissioners. To begin with, the Waterway Board would have the control of what is known as " the Cross,"—the network of water- ways which join the Humber, the Mersey, the Severn, and the Thames with the Midlands. When the Board thought that other canals ought to be acquired, it would have power to submit the necessary proposals to Parliament. It is calculated that the improvements required on the four great lines of " the Cross " would cost £17,500,000, and the annual expenditure would be increased to £1,098,000. To meet that there would be an existing revenue of only £567,000.

We cannot help confessing to have read this Report, interesting and exceptionally well written though it is, with some disappointment. As we said at the beginning, there is no exact analogy from Continental experience, as abroad nearly all the railways are State-owned. The fact that railways are not State-owned here is surely an essentially distinguishing fact, and yet, as a few members of the Commission point out, very little attention has been bestowed on the probable effect of having State-owned canals alongside privately owned railways. The whole canal question is so complicated that a most careful examination of the evidence now placed before us will be necessary before we can hope to penetrate the obscurity. It would be ridiculous to pretend to have a ready-made scheme. We still trust that it may be possible to bring into common and easy use once more a system of transport which has the enormous preliminary advantage of being in existence. But we could not possibly approve the vague estimate which the Commission has offered of the profit and loss account of acquiring the canals. Let us express, however, our belief that if Mr. Asquith's Development Scheme should ever come into being, and the State should decide for Englishmen how they ought to spend their money in order best to secure their material advancement, public money would be spent less disadvantageously on the rescue of canals from their present decay than on ahnost any object on which the money would be likely to be lavished.