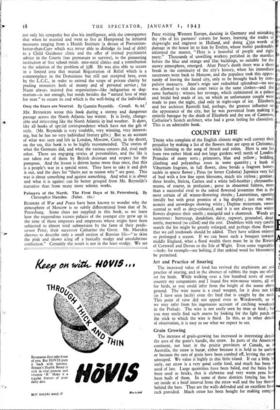 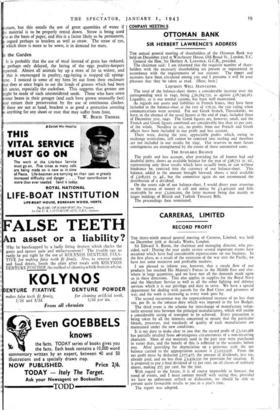 THosu who complain of the English climate might well correct their prejudice by making a list of the flowers that are open at Christmas, while listening to the song of thrush and robin. Here is one list from two rather bleak and not large gardens well north of London. Primulas of many sorts ; primroses, blue and yellow ; bedding, climbing and polyanthus roses in some quantity ; a bush of Viburnum fragrans, in full flower, dose beside a fragrant honeysuckle in sparse flower ; Pirus (or better Cydonia) Japonica very full of bud with a few fine open blossoms, much iris stylosa ; gentian ; three heaths, Stricta, Carnea and a white bell-heather ; chrysanthemums, of course, in profusion ; gorse in abnormal fulness, more than a successful rival to the naked flowered jessamine that is the most certain of all winter-flowering shrubs ; Laurustinus, opening timidly but with great promise of a big display ; just one small aconite and snowdrops showing white ; Daphne mezereum, sweet scented as well as deep-coloured, and it is not always that winter flowers dispense their smells ; marigold and a shamrock. Weeds are numerous : buttercup, dandelion, daisy, ragwort, groundsel, deadnettle, mayweed (so called) and the rest. Doubtless with very careful search the list might be greatly enlarged, and perhaps those flowers that we call toadstools should be added. They have seldom enjoyed so prolonged a season. If we can boast such a bouquet towards middle England, what a floral wealth there must be in the Riviera of Cornwall and Devon or the Isle of Wight. Even some vegetables —leeks, for example—are bolting, if that unkind word for blossoming be permitted.

Art and Practice of Snaring The increased value of food has revived the unpleasant art and practice of snaring, and in the absence of rabbits the traps are often set for birds. While walking over a few hundred acres of rough country my companions and I found five wire-noose snares, all set for birds, as you could infer from the height of the noose above ground. The wire noose is a cruel weapon, for it does not kill (as I have seen lately) even tht bird that is caught by the neck. This point of view did not appeal even to Wordsworth, or we may infer from his ingenuous account of catching woodcoc in the Prelude. The wire is not easily seen by man or bird ; bu you may easily find such snares by looking for the light patch o the stick to which the wire is fixed. In this, as in other detai of observation, it is easy to see what we expect to see.

Grain Growing The increase of grain-growing has increased in interesting detat the uses of the grain's handle, the straw. In parts of the Americ continent, not least in the prairie provinces of Canada, as Australia, the straw is bur:at, either because it is held to be usele or because the ears of grain have been combed off, leaving the stra unreaped. We value it highly in this little island. If cut a little b early, oat straw is a very good cattle food, and much has been used of late. Large quantities have been baled, and the bales has been used as bricks, that is elaborate and very warm pens hay been built of them. In some of these districts fencing has bee set inside at a brief interval from the straw wall and the hay throW behind the bars. Thus are the walls defended and an excellent f rack provided. Much straw has been bought for making compo

anure, but this entails the use of great quantities of water if e material is to be properly rotted down. Straw is being used lso as the basis of paper, and this is a factor likely to be permanent, regard perhaps to bracken as well as straw. The straw of rye, which there is more to be sown, is in demand for mats.

the Garden • It is probable that the use of meal instead of grain has reduced,

r perhaps only delayed, the laying of the .eggs poultry-keepers xpected. Almost all animals lay up a store of fat in winter, and this is encouraged in poultry, egg-laying is stopped till springe. I noticed in some of my hens let out from their enclosure at they at once begin to eat the heads of grasses which had been ft uncut, especially the cocksfoot. This suggests that greater use 'ght be made of such unconsidered seeds. Those who have sown inter beans in their potager (and such have grown unusually fast) ay ensure their preservation by the use of continuous cloches. f these are not at hand, bracken is as good a protective covering

s anything for any shoot or root that may suffer from frost.