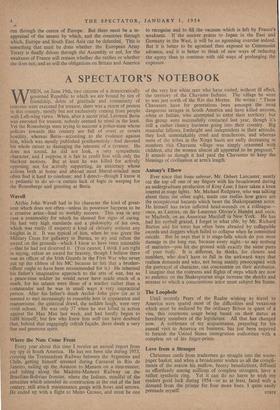 Archie John Wavell had in his character the kind of

great- ness which does not often—unless its possessor happens to be a creative artist—lead to worldly success. This was in any case a commodity for which he showed few signs of caring. He had very high standards and a philosophy of his own, which was really (I suspect) a kind of chivalry without any knights in it. It was typical of him, when he was given the Military Cross for gallantry in Burma, to try and refuse the award on the grounds—which 1 know to have been untenable —that he had not deserved it. (You cannot, I think I am right in saying, refuse an award for bravery, though I believe there was an officer of the Irish Guards in the First War who never put up the ribbon of his MC because he felt that a brother- officer ought to have been recommended for it.) He inherited his father's imaginative approach to the arts of war, but as a peace-time soldier he would never have made much of a mark, for his talents were those of a teacher rather than a commander and he was in small ways a very unpractical person. After his father's death Archie John grew (or so it seemed to me) increasingly to resemble him in appearance and mannerisms; the quizzical drawl, the sudden laugh, were very vivid echoes. He was only 37 when he was killed in action against the Mau Mau last week, and had hardly begun to fulfil himself; but few who knew him well can have doubted that, behind that engagingly coltish facade, there dwelt a very fine and generous spirit.