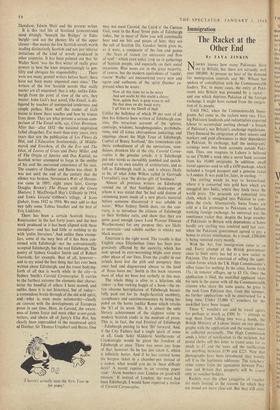 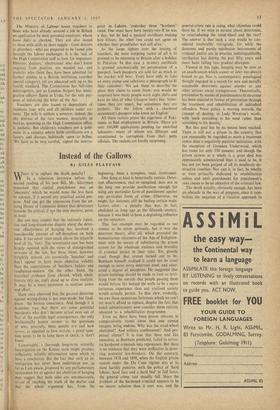 The Racket at the Other End

Fay TAYA ZINK1N NOBODY knows how many Pakistanis there are in Britain, but there are certainly well over 100,000. At present we hear of the demand for immigration controls and Mr. Wilson has spoken of consultation with the Commonwealth leaders. Yet, in many cases, the entry of Paki- stanis into Britain was preceded by a racket-- and one which deprives Pakistan of the foreign exchange it might have earned from the emigra- tion of its people.

Until 1962, when the Commonwealth Immi- grants Act came in, the rackets were two. First. big Pakistani landlords and industrialists exported labour to accumulate sterling abroad—a breach of Pakistan's, not Britain's, exchange regulations. They financed the emigration of their tenants and workers and paid allowances to their dependents in Pakistan. In exchange, half the immigrants' earnings went into bank accounts outside Paki- stan. Thus, one magnate in Lahore is believed to net £10,000 a week into a secret bank account from his 10,000 emigrants. In addition, small travel agencies used to sell a £450 package, which included a forged passport and a genuine ticket to London. It was paid for, later, in sterling. -• The sterling wends its way to Switzerland,

where it is converted into gold bars which are smuggled into India, where they fetch twice the world price. The proceeds are converted into cloth, which is smuggled into Pakistan to com- plete the circle. Alternatively, Swiss francs are sold at a fat premium to Pakistanis or Indians wanting foreign exchange. So universal was the remittance racket that, despite the large number of Pakistanis in Britain with dependents at home hardly any sterling was remitted until last year, when the Pakistani government agreed to pay a bonus to attract remittances. As a result, £200,000 is being remitted every month.

With the Act, free immigration came to an end. Every attempt of the British government since to limit entry has led to a new racket in Pakistan. The first consisted of selling the appli- cation forms which the UK High Commissioner's office issues for nothing. In the cities, forms fetch 15s.; in remoter villages, up to £3 15s. Once the application is filed, the unskilled applicant takes his turn in the queue with all the Commonwealth citizens who share the same quota. So great is the rush from Pakistan that, from this summer, no further applications will be entertained for a long time. Under 25,000 'C' vouchers for the unskilled have been issued.

These 'C' vouchers are sold by travel agents for perhaps as much as £500. In attempt to stop them from falling into wro,g hands, the British Ministry of Labour insists on two photo- graphs with the application and the voucher must be collected personally. The High Commission sends a letter of notification to the recipient, but postal clerks sell this letter to travel touts for as much as £7 and the touts sell the notification for anything between £150 and £225. Now that photographs have been introduced, they usually sell it to the legitimate addressee. The voucher.' value comes from the agreement between Paki- stan and Britain that passports will be issued only to voucher-holders.

Rackets over the other categories of voucher arc more limited, as the reasons for which th,..■ arc issued arc more clear-cut. But they still exist.

The Ministry of Labour issues vouchers to those who have already secured a job in Britain on application by their potential employer, whose bona fides is checked. They are also issued to those with skills in short supply—from doctors to plumbers—who are prepared to be found jobs through the labour exchanges. It is the task of the High Commission staff to look for impostors: Illiterate 'doctors,' electricians' who don't know negative from positive, are weeded out, and students who claim they have been admitted for further studies to a British institution (another special category), yet are educated only up to the fourth standard. The Commission has full-time interrogators, just as London Airport has immi- gration officers fluent in Urdu, for the sole pur- pose of enforcing the letter of the Act.

Vouchers are also issued to dependents of residents (one wife and all children under six- teen). The wife is seldom a mistress; indeed, the shy distress of the rare women, invariably in burkas, queueing at the High Commission office, is pathetic. But children's vouchers are a gold- mine in a country where birth certificates are a luxury and doctors habitually open to bribes. 'We have to be very careful,' sighed the interro- gator in Lahore, 'yesterday three "brothers" came. One must have been twenty-two if he was a day, but he had a medical certificate making him fifteen; the other two could not agree on whether their grandfather was still alive.'

As the loops tighten over the issuing of vouchers, the most tempting racket of all is to pretend to be returning to Britain after a holiday in Pakistan. In that case a re-entry certificate is granted automatically on presentation of a passport. Such passports are sold for as much as the market will bear. Touts have only to fake an entry stamp and substitute a photograph to fit their customer. 'We ask them to describe the place they claim to come from; you would be surprised how many people work night shifts and have no idea of what Glasgow looks like. Some- times they are smart, but sometimes they are pathetic, like the fellow with a chartered accountant's passport who knew no English.'

All these rackets prove the eagerness of Paki- stanis to find employment in Britain. There arc over 160,000 applications pending for unskilled labourers—many of whom are illiterate and accustomed to corruption from their petty officials. The rackets are hardly surprising.