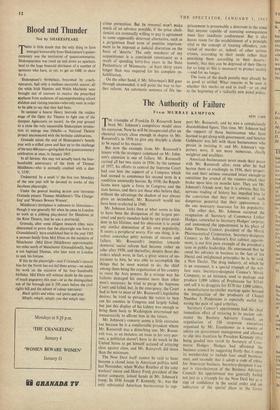 THERE is little doubt that the only thing to have emerged honourably from Shakespeare's quater- centenary was the institution of quatercentenaries. Shakespearian was toted up and down an apathetic land to the huge financial detriment of a number of sponsors who have, as yet, to get an OBE to show for it.

Shakespeare's birthplace,. boycotted by coach- operators, had only a medium successful season; all the while Irish Hamlets and Welsh Macbeths were brought out of cocoons to receive the prescribed applause from audiences of uncomprehending school children and visiting tourists—who only went in order to be able to say that they had been.

In summer a hoarse Henry bestrode the sodden stage of the Open Air Theatre to fight one of the dampest Agincourts on record. As the year ground to a close the only memorable Shakespeare produc- tion to emerge was Othello—a National Theatre project unconnected with the birthday celebrations.

Granada salute the end of Shakespeare's benefit year with a stifled yawn and face up to the challenge of the next 400 years—giving their first quatcrcentenary celebration at once, in January 1965.

In all fairness this may not actually mark the four- hundredth anniversary of the birth of Thomas Middleton—who is normally credited with a date 1570'.

Undeterred by a small `c' the first two Mondays of the new year will be devoted to works of this Jacobean playwright.

Middleton's birthplace is unknown to historians— though it was generally felt when he came to London to work as a jobbing play-doctor for Henslowe at the Rose Theatre, that he was a provincial.

Granada, after some diligent research (they were determined to prove that the playwright was born in Granadaland!) have established that in the year 1565 a yeoman family from Mid Elton on the outskirts of Manchester (Mid Elton (Middleton) approximately ten miles north of Manchester (Granadaland)), begat a son baptised Thomas, who later went to London to seek his fortune.

If this be the playwright—and if Granada's natural bias for the North has not led them astray—we salute his work on the occasion of his four-hundredth birthday. Mid Elton will without doubt be the centre of much pageantry this year—or as the distinguished son of the borough put it 350 years before the civil rights bill and the advent of colour television: