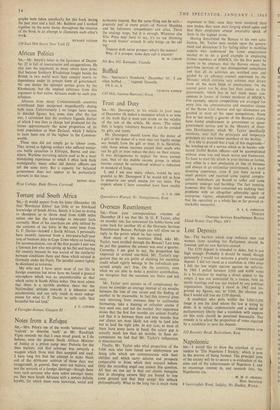 SIR,—From your correspondence columns of December 18 I sec that Mr. D. G. P. Taylor, after six months' rest, has remounted his hobby-horse and come back for another tilt at the Overseas Services Resettlement Bureau. Perhaps you will allow me to reply to the points which he has raised.

How many of the vacancies filled, asks Mr. Taylor, were notified through the Bureau? Last time he put this question the answer was over a quarter. Currently, I am glad to say, the proportion has improved to around one-third. Mr. Taylor's sug- gestion that we are guilty of claiming for ourselves credit which rightly belongs to the individuals con- cerned simply isn't true. On the contrary, even when we are able to make a positive contribution, we recognise that the successes are theirs and not ,

Mr. Taylor next accuses us of complacency be- cause we consider an average interval of six months between the loss of one career and the finding of another to be reasonable. In fact this interval gives men returning from overseas time to acclimatise themselves, take a training or refresher course if they need one, and test the market. Our experience shows that the first few months are seldom fruitful and that it is between three and nine months that our clients are most likely not only to land jobs but to land the right jobs. In any case, as most of them have some leave in hand, the salary gap is actually much less than six months. In these cir- cumstances we feel that Mr. Taylor's indignation is misconceived.

Finally, Mr. Taylor asks what proportion of the 5,000 men who have found new employment are doing jobs which are commensurate with their abilities and which carry salaries and prospects comparable to those which they enjoyed before. Only the recording angel can answer this question. All that we can say is that our clients recognise that in changing careers they are bound to lose some ground and that they accept this setback philosophically. What in the long run is much more important is that, once they have mastered their new trades, they soon start forging ahead again and that their employers almost invariably speak of them in the highest terms.

Having demolished the Bureau to his own satis- faction, Mr. Taylor next rounds upon the govern- ment and denounces it for failing either to mobilise experts who understand the home employment market or to set a good example in employing former members of HMOCS. On the first point he seems to be unaware that the Bureau enjoys the part-time services of two distinguished consultants and that all its activities are watched over and guided by an advisory council appointed by the Minister which contains very eminent men drawn from all the main fields of employment. On the second point too he does less than justice to the government, which has in fact made many con- cessions in favour of former members of HMOCS. For example, special competitions are arranged for entry into the administrative and executive classes of the Home Civil Service and age allowances are granted in most of the open competitions. From first to last nearly a quarter of the Bureau's clients have found employment in government or quasi- government service and in the Ministry of Over- seas Development, which Mr. Taylor specifically mentions, over half the principals and temporary principals are now former members of the Service.

It is idle to pretend that a task of this magnitude— the winding-up of a service which in its heyday con- tained 20,000 British officers—cart be accomplished without some loss and much worry and frustration. To have to start life afresh in your thirties or forties, very often in a new profession or line of business and always in an unfamiliar environment, is a most daunting experience, even if you have earned a small pension and received some capital comptn- sation. Individuals are bound to suffer and some certainly undergo real hardship. The fact remains, however, that the men concerned are tackling their problems with an altogether admirable spirit of enterprise, vigour, adaptability and tenacity and that the operation as a whole has so far proved re- markably successful.