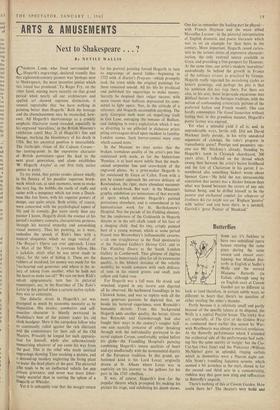 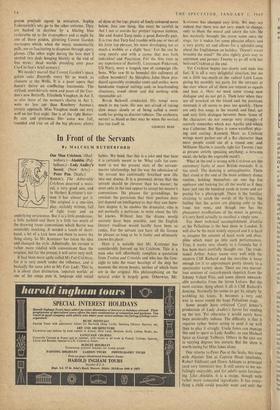 SOME say it's feckless to have two subsidised opera houses running the same piece during the same season and almost over- lapping: but Madam But- terfly in English at Sadler's Wells and the revived Madama Butterfly (in Italian, although sung by an English cast.) at Covent Garden are so different to

look at (and therefore, in certain subtle ways, so different to hear) that there's no question of either stealing the other's thunder.

Partly because it is relatively small and partly because of the specific talents at its disposal, the Wells is a capital Puccini house. The tricky first act, especially, of The Girl of the Golden West as conducted there earlier this season by War- wick Braithwaite was almost a musical revelation. At the Butterfly performance which I attended the orchestral side of the performance had noth- ing like the same suavity or insight; but the Cio- Cio-San (Ava June) and the Pinkerton (William McAlpine) gave us splendid, ringing earfuls which in themselves were a Puccini night out. Alix Stone's trundling Japanese screens, which seemed a bit pointless at the start, closed in for the second and third acts in a concentrating, ruthless way that gave new sting and suffocation to Butterfly's anguish.

There's nothing of this at Covent Garden. How could there be? The theatre's very build and

genius preclude agony in miniature. Sophip Fedorovitch's sets go to the other extreme. They are backed in daytime by a blazing blue cyclorama up to the stratosphere and at night, by one of those golden, glittering Covent Garden starscapes which, when the music momentarily palls, are so fascinating to diagnose through opera glasses. (The other night during the love duet I spotted two duds hanging blackly at the end of fine wires: dead worlds presiding over poor Cio-Cio-San's brief ecstacy.) We needn't marvel that Covent Garden's space galore suits Butterfly every bit as much as clausure at the Wells. It is a poor opera that doesn't thrive on conflicting treatments. The stylised, semi-hieratic mien and poses of the Gar- den's new Butterfly, Elizabeth Vaughan, in Act 3, as also those of the women's chorus in Act 1, were no less apt than Rosebery Avenue's veristic approach. Miss Vaughan made out very well on her first night. She is of the right Butter- fly size and prettiness. Her voice was full, rounded and true on all the big phrases; plenty of shine at the top; plenty of finely coloured notes below. Just one thing. She must be careful in Act I not to overdo her prettier ingenue timbres, She and Andre Turp make a good Butterfly pair. It is true that Turp had trouble with one or two of his forte top phrases, his tenor developing not so much a wobble as a slight 'beat.' For the rest he sang openly and with a caress that was both individual and Puccinian. For the first time in my experience of Butterfly, Lieutenant Pinkerton, US Navy, wore a longish row of campaign rib- bons. Who saw fit to bemedal this sallowest of callow bounders? As Sharpless John Shaw pro- duced agreeably avuncular tones and smiles, wore handsome tropical suitings and, in heartrending. situations, stood about and did nothing with reasonable art.

Bryan Balkwill conducted. His tempi were much to my taste. He was not afraid of taking slow music slowly or of being called a sweet tooth for giving us discreet rubatos. The orchestra weren't as bland as they may be when the revival has run itself in.