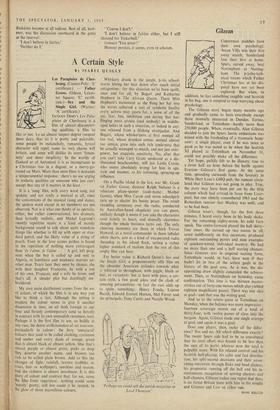 The Gilzean story began many months ago and gradually came to bore everybody except those intensely interested in Dundee, Torino, Sunderland, or Tottenham—hardly more than 250,000 people. When, eventually, Alan Gilzean decided to join the Spurs, hectic enthusiasm was Mixed with the foreboding of a traumatic hang- over : a single player, even if he was twice as good as he was noted to be when the Scottish XI played at Tottenham on November II, could not possibly make all the difference.

Yet hope, guiltily felt to be illusory, rose to a -fever half an hour before the battle against Everton—Gilzean's first game. At the same time, spreading outwards from the lavatory in White Hart Lane's GHQ pub, the rumour circu- lated that Gilzean was not going to play. True, the story may have been put out by the fifth column which had arrived in force from Liver- pool, but one silently remembered 1963 and the Rotterdam rumour that Mackay was unfit, and so he had been.

Gilzean wasn't, though, for the first .three minutes, I heard every bone in his body shake. For the remaining eighty-seven, let cold facts speak. The centre-forward played the ball thirty- four times. He messed up two moves in all, acted indifferently on five occasions, produced eighteen outstanding passes and nine examples of quickest-witted, individual mastery. He had no more than one and a half scoring chances. Since Greaves was in inspired scoring form, Tottenham would, in fact, have won if they hadn't let in two of the softest goals in the history of the goal area. As it was, the dis- appointing draw slightly concealed the achieve- ment. Then, at Nottingham on Saturday, came confirmation. This time is was thirteen master- strokes out of forty-one moves which also yielded eighteen magnificent passes. There was one shot at goal---and that was the wining goal.

And so to the return game at Tottenham on Monday, when the balance was more impressive: fourteen sovereign moves out of a total of thirty-four, with twelve passes of class into the bargain. Again, Gilzean made one single attempt at goal, and again it was a goal.

Does one player, then, make all the differ- ence? Yes and no. All which difference exactly?

The recent Spurs side had to be so constituted that its total effort was bound to be less than the sum of its parts; whereas now the total is palpably more. With his relaxed control and his Scottish ball-playing, his calm and fast distribu- tion, his split-second decisions and their aston- ishing execution through flicks and head glances, his prognostic running off the ball and his in- stantaneous recognition of scoring chances and half-chances, Gilzean makes one regret that there is no Great Britain team with him in the middle and Greaves and Law on either side.