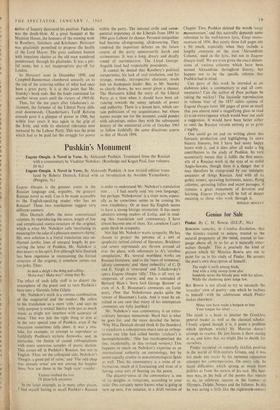 Eugene Onegin is the greatest poem in the Russian language and, arguably, the greatest Russian novel as well. Can it be made accessible to the English-speaking reader who has no Russian? These two translations suggest very different answers.

Miss Deutsch offers the more conventional solution, by reproducing the metre, length of line and complicated stanza-structure of the original, which is what Mr. Nabokov calls 'mutilating its meaning for the sake of a pleasure-measure rhyme'. His own solution is a literal -translation into un- rhymed iambic lines of unequal length. In pre- serving the letter of Pushkin, Mr. Nabokov is also nearer to his spirit. For although Miss Deutsch has been ingenious in maintaining the formal structure of the original; it somehow comes out too jerky. Thus : At dusk a sleigh's the thing and calling: 'Make way! Make way!' along they fly.

The effect of such jolly stuff is to distort the atmosphere of the poem and to turn Pushkin's hero into a Slavonic John Gilpin.

Mr. Nabokov's work is a curious combination of the magisterial and the modest. He refers to his translation as a mere 'crib,' and says its 'only purpose is textual fidelity with just as much music as might not interfere with accuracy of sense.' This was nait the right thing to aim at in the very special case of Pushkin. even if the execution sometimes falls short. It was a mis- take, for example, to attempt to reproduce so faithfully Pushkin's stylistic fireworks, and, in particular, the fusion of casual colloquialisms with more sonorous samples of poetic diction. This comes off in Pushkin's Russian, but not in English. Thus, on the colloquial side, Nabokov's 'Onegin. a good pal of mine,' and 'The odd chap was already cross' are not among his happier lines. Nor are those in the 'high style' couplet Tatiana credited the lore Of plain-folk ancientry.

In the latter example, as in many other places, I lied myself having to recall Pushkin's Russian

in order to understand Mr. Nabokov's translation into . . . I had nearly said 'my own language,' but perhaps 'Nabokovese' is a truer term, especi-

ally as he sometimes seems to be coining his

own vocabulary. Or at least his English seems to have a strong foreign intonation. It has many

admirers among readers of Lolita, and in read-

ing this translation and commentary have almost become one of them. Yet somehow l can't quite throb in sympathy.

Not that Mr. Nabokov wants sympathy. He has chosen to project the persona of a sort of apoplectic retired colonel of literature. Brickbats and severe reprimands are thrown around all over the place, with references to A's 'careless compilation,' B's 'several worthless works on

Russian literature,' and to the 'mass of nonsense,' 'idiotic comments' and 'sheer imbecility' of C, D

and E. Vergil is 'overrated' and Tchaikovsky's

opera Eugene Onegin 'silly.' This is all very in- temperate, of course, and one is reminded of

Bernard Shaw's 'born fool George Borrow' or even of A. E. Housman's comments on Latin poets. (Not that Nabokovese packs quite the venom of Housman's Latin. And it must be ad- mitted in any case that many of his intemperate comments are fully justified.) Mr. Nabokov's vast commentary is an extra- ordinary baroque monument. Hard fact is what he goes for, and the more detailed the better. 'Why Miss Deutsch should think fit [he thunders] to transform a coleopterous insect into an orthop- terous one [she had called beetles 'crickets'l is incomprehensible.' (She has recoleopterised the line, incidentally, in this revised version.) This happens to touch on Nabokov's expertise as an international authority on entomology, but he seems equally erudite in non-entomological fields as well. Thus his commentary is a mine of in- formation,-much of it fascinating and most of it having some sort of bearing on the poem, The discursi-eness of the commentary is one of its delights ar irritations, according to your taste. One certainly never knows what is going to turn up next. For instance, in a draft version of

Chapter Two, Pushkin deleted the words `exegi monuntentutn,' and this naturally demands some reference to his well-known lyric, Exegi monu- 'newton of 1836. But surely three full pages are a bit much, especially when they include a lengthy comment on the term 'Alexandrine Column,' used in the lyric, but not in Eugene Onegin itself. We are even given the exact dimen- sions of various columns which have been termed Alexandrine throughout history, but happen not to be the specific column that Pushkin had in mind.

Can parts of this work be intended as an . elaborate joke, a commentary to end all com- mentaries? Can the author of Pnin perhaps be taking the mickey? The facsimile reproduction in volume four of the 1837 editio optima of Eugene Onegin (over 300 pages of print so small that you almost need a magnifying glass to read it) is an extravagance which would bear out such a suggestion. It would have been better either to omit the Russian version entirely or to print it legibly.

• One could go on and on writing about this fantastic production and highlighting its more bizarre features, but I have had many happy hours with it, and it does after all make a big contribution to the study of Pushkin. Its very eccentricity means that it fulfils the first neces- sity of a Russian work in the eyes of us stolid Anglo-Saxons, though there is a danger that it may therefore be overpraised by our indulgent amateurs of things Russian. And with all its gothic towers, sprawling buttresses, mazes, flying columns, sprouting follies and secret passages, it remains a great monument of devotion and learning. Eugene Onegin• will be full of deeper meaning to those who work through it.