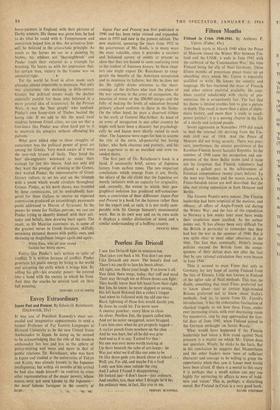 THIS book starts in March 1940 when the Peace of Moscow closed the Winter War between Fin- land and the USSR; it ends in June 1941 with the outbreak of the 'Continuation War,' this time Finland being the ally of Nazi Germany. These fifteen months of precarious peace make up an absorbing story which Mr. Upton is especially qualified to write. He knows the country and language. He has mastered the mass of Finnish and other source material available. He com- bines careful scholarship with clarity of pre- sentation. He is scrupulously fair. The fact that his theme is limited enables him to give a picture in depth. The result is more than a piece of diplo- matic history, and more than 'a study in small- power politics'; it is a moving chapter in the life of a sturdy and isolated people.

Soviet aggression in November 1939 did much to heal the internal rift deriving from the Fin- nish civil war of 1918. And the Peace of Moscow did not bring security. There was pres- sure, interference, the sinister persistence of the Karelian-Finnish Soviet Socialist Republic. In the summer of 1940 came the occupation and sup- pression of the three Baltic states (and it must not be forgotten that Finnish volunteers had played a gallant part in the achievement of Estonian independence twenty years before). To the west was Sweden, and the moves towards'a Finno-Swedish union are well described. But the idea met strong opposition in both Moscow and Berlin.

The Entente Powers were remote. The Finnish leadership had been sceptical of the motives, and efficacy, of offers of Anglo-French aid during the Winter War; and the fate of the expedition to Norway a few weeks later must have made their scepticism seem justified. As the author points out, 'It has always been very difficult for the British in particular to remember that they had lost the war in the summer of 1940. But it was quite clear to most other observers at the time. The fact that, eventually, Hitler's insane policies rescued the British from the conse- quences of their defeat does not alter the fact that by any rational calculation they were beaten in June 1940.'

Thus it seemed to most Finns that only in Germany lay any hope of saving Finland from the fate of Estonia. Little was known in Finland of the uglier side of Nazi methods. This was, no doubt, something that most Finns preferred not to know about--just as certain high-minded Britons preferred not to know about Stalin's methods. And so, to quote from Dr. Futrell's introduction, 'it has the remorseless fascination of classical tragedy to see how these Finns, under ever increasing strain, with ever decreasing room for manoeuvre, step by step approached the fate- ful days of June 1941, when Finland joined in the German onslaught on Soviet Russia.'

What would have happened if the Finnish leadership had taken a firm stand against Nazi pressure is a matter on which Mr. Upton does not speculate. Wisely, he sticks to the facts. But in his conclusion he suggests that Mannerheim and the other leaders were 'men of sufficient character and courage to be willing to grasp the opportunity when they saw it. Lesser men would have been afraid. If there is a moral to this story it is perhaps that a small nation can pay too highly for entrusting its affairs to men of bold- ness and vision.' This is, perhaps, a disturbing moral. But Finland in Crisis is a very good book.