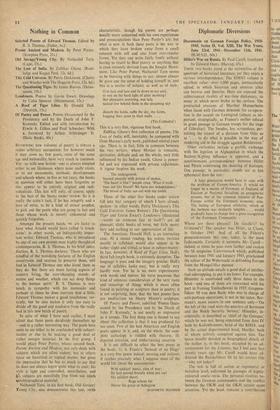 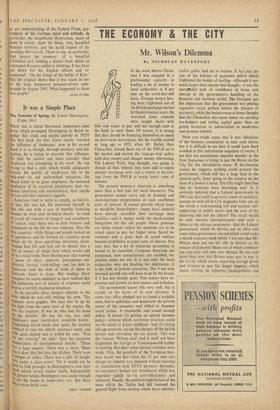 THESE two books stand at the extremities of the spectrum of historical literature, yet they enjoy a curious interdependence. The HMSO volume is excellent value—over 1,000 pages, immaculately edited, in which historian and amateur alike can browse and theorise. Here are exposed the subterranean rivulets of war-time diplomacy, so many of which never broke to the surface. The protracted evasions of Marshal Mannerheim when faced with German demands for co-opera- tion in the assault on Leningrad (almost as im- portant, strategically, as Franco's earlier refusal to grant passage to German troops for the siege of Gibraltar). The Swedes, less scrupulous, per- mitting the transit of a division from Oslo so

as . . to do what is possible in the way of rendering aid in the struggle against Bolshevism.' Other curiosities include a prolific exchange

with the legation in Afghanistan in which the Buchan/Kipling influence is apparent, and a sanctimonious correspondence between Hitler and Main concerning the shooting of hostages. One passage, in particular, stands out as less ephemeral than the rest:

A later generation would have to cope with the problem of Europe-America. It would no longer be a matter of Germany or England, of

Fascism or National Socialism, or antagonistic systems, but of the common interests of Pan-

Europe within the European economic area. The feeling of European solidarity, which at the moment was distinctly tangible . . . would gradually have to change into a great recognition of the European Community.

Whose are these phrases? De Gaulle's? Jo Grimond's? The speaker was Hitler, to Ciano, in October 1941. And of all the Ffihrer's pronouncements this one, today, is the most fashionable. Certainly it animates Mr. Caren— indeed, at times he goes even further and evokes the SS magazine Untermensch which, published between June 1941 and January 1945, proclaimed the valour of the Wehrmacht in defending Europe from the Mongol-Slav menace.

Such an attitude entails a good deal of intellec- tual sidestepping, to put it no lower. For example, Hinimler is mentioned only three times in the book—and two of them are concerned with' his part in framing Tukhachevski in 1937. Gruppen- ftihrer SS von dem Bach, who was in charge of anti-partisan operations, is not in the index. Bor- mann's name occurs in one sentence only—'On the left of the road were the quarters of Bormann and the Reich Security Service.' Himmler, in- cidentally, is described as 'chief of the Gestapo,' which he was not, being separated from Amt IV both by Kaltenbrunner, head of the RHSA, and by the actual departmental head, Mueller, both of whom actively conspired against him. The space usually devoted to biographical details of the author is, in this book, occupied by an ad- vertisement for the Listener, but I feel sure that twenty years ago Mr. Caretl would have ad- dressed the Reichsflihrer SS by his correct title --why not today?

The text is full of action at regimental or battalion level, enlivened by passages of highly- coloured oratio recta. The personal rivalries be- tween the German commanders and the conflict between the OKW and the OKH receive scant attention. Yet the book remains a contribution

to our understanding of the Eastern Front, par- ticularly of the German mind and attitude. In particular, the magnificent illustrations, many of them in colour, show the bleak, vast, beautiful Russian territory, and the harsh impact of the invading Herrenvolk. There is one, in particular, that haunts the memory: of a beautiful Ukrainian girl, holding a bucket from which an exhausted Russian soldier is drinking. It has been cut down for the English edition and re- captioned : 'On the fringe of the battle of Kiev.' But the original shows that it was taken in one of the huge temporary prisoner-of-war com- pounds in August 1941. What happened to those