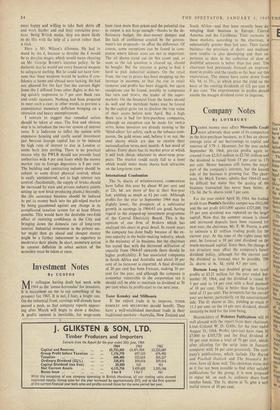 DEARER money may affect Mercantile Credit more adversely than some of its competitors in the hire-purchase business, as it has an above- average ratio of net borrowings to capital and reserves of 5.79:1. However, for the year ended September 30, 1964, pre-tax profits again in- creased from £2.313 million to £2.741 million and the dividend is raised from 15 per cent to 174 per cent. Motor business still forms the major part of the company's interests, but the leasing side of the business is growing fast. The ,chair- man, Sir Mark Turner, admits that 1964-65 maY be difficult but states that the quality of the business transacted has never been better; at 12s. 6d. the 5s. shares yield 7 per cent.

For the year ended April 30, 1964, the trading profit from Pontin's (holiday camps) was £962,000 and the net profit £413,000 against £325,000. The 35 per cent dividend was repeated on the larger capital. Now that the summer season is closed and increased deposits have been received for next year, the chairman, Mr. F. W. Pontin, is able to estimate a £1 million trading profit for the current year. At the time of the rights issue this year, he forecast a 10 per cent dividend on the much-increased capital. Since then, the change in tax structure may affect the company's future dividend policy, \although for the current year the dividend as forecast may be possible. The 2s. shares at 4s. 3d. yield 4.5 per cent.

Dorman Long has' doubled group net taxed profits at £3.21 million for the year ended Sep- tember 30, 1964, and the dividend is raised bY 5 per cent to 14 per cent with a final payment of 10 per cent. This is better than the forecast total of 11 per cent. The prospects for the current year are better,. particularly on the constructional side. The £1 shares at 26s., yielding as much as 11.3 per cent on the 14 per cent dividend, should Certainly be held for the time being.

Shareholders of Websters Publications will be well pleased with the report from their chairman, Lieut.-Colonel W. D. Gibbs, for the year ended August 31, 1964. Profits (pre-tax)• have risen bY £7,000 to £105,726 and the final dividend of 50 per cent makes a total of 70 per cent, which, after allowing for the scrip issue in January. compares with 54 per cent previously. The com- pany's publications, which include The Racing and Football Outlook and The Investor's Re- view, have all done well. The chairman states that as it has not been possible to find other suitable publications for the group, it is now proposed to repay 6d. on each Is. ordinary share from surplus funds. The Is. shares at 7s. give a very useful return of 10 per cent.