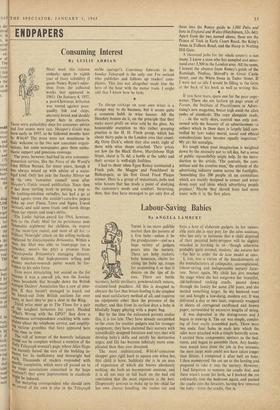 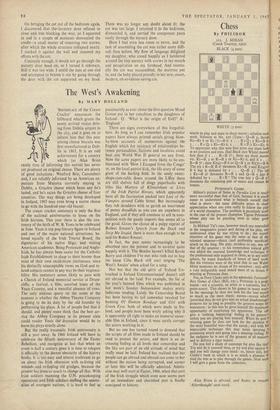 THERE is no more gullible market than the parents of a first baby—unless it be the grandparents—and so a huge variety of gadgets pours into the nursery. There are baby rockers, baby bouncers, chairs for sitting the baby up, straps for suspending it so that it dances on the tips of its toes. There are bottle warmers, bottle sterilisers, powdered-milk mixers, strained-food poachers. All this is designed to obscure the fact that breast-feeding is the simplest and most satisfactory method of all, and requires no equipment other than the presence of the mother; and that from its earliest days a baby is blissfully happy playing with a paper bag.

But by the time the exhausted parents realise this, it is too late. They have already succumbed to the craze for madder gadgets and for stronger equipment; they have cluttered their nursery with scientifically designed furniture and toys that will develop baby's skills and satisfy his destructive urges; and life has become infinitely more com- plicated than they ever dreamed. The most sophisticated, Which?-conscious shopper goes right back to square one when her, first child is born. Suddenly she is in an area of experience of which she knows absolutely nothing; she feels an incompetent amateur, and it is all too easy to fall back on the bad old conviction that the most expensive is the best. Desperately anxious to make up to her child for her own clumsy handling, she rushes out and

buys a. host of elaborate gadgets. In her vulner- able stateishe is easy prey for the sales assistant, who has only to insinuate that a child deprived of their patented baby-propper will be slightly retarded in learning to sit—'though otherwise probably quite normal, madam,' she assures her —for her to order the de luxe model at once.

I, too, was a victim of the blandishments of the manufacturers of collapsible, uncomplicated, labour-saving and indispensable nursery furni- ture. Never again. My child has just reached the stage when she has outgrown her beautiful, old-fashioned rocking cradle, passed down • through the family for some 250 years, and she needed something larger. So my husband went out and bought a low-slung, modern cot. It was delivered a day or two later, copiously wrapped in sheets of corrugated cardboard and brown paper, surrounded by excessive lengths of string.

It was deposited in the dining-room and I began to unwrap it. The cot was simple, consist- ing of four easily assembled parts. There were two ends, four holes in each into which the sides were attached with a simple butterfly screw. I carried these components upstairs to the bed- room, and began to assemble them. Any handy- man would have done the job in five minutes; the most inept male could not have taken longer than fifteen. 1 completed it after half an hour. I then manoeuvred the cot on to the landing and prepared to take it into the nursery. However, I had forgotten to remove the cradle first, and there wasn't room for both, so I backed the cot awkwardly into the bedroom again, and pushed the cradle into the lavatory, having first removed the baby--from the cradle, that is. On bringing the cot out of the bedroom again, I discovered that the* lavatory door refused to close and was blocking the way, so I squeezed in and in a couple of moments dismantled the cradle—a small matter of removing two screws, after which the whole structure collapsed neatly. I stacked it against the wall and resumed my efforts with the cot.

Curiously enough, it would not go through the nursery door head on, so I turned it sideways. Still it was too wide. I undid the nuts at one end and attempted to brazen it out by going through. the door with the cot supported on my head.

There was no longer any doubt about it: the cot was too large. I returned it to the bedroom, dismantled it, and carried the component parts easily through the nursery door.

Here I had even less room to move, and the task of assembling the cot was rather more diffi- cult than before. My flow of language delighted my daughter, who cooed happily as I lumbered around the tiny nursery with screws in my mouth and perspiration on my forehead. And eventu- ally the cot was reassembled, the mattress put in, and the baby placed proudly in her new, smart, modern, oh-so-labour-saving cot.