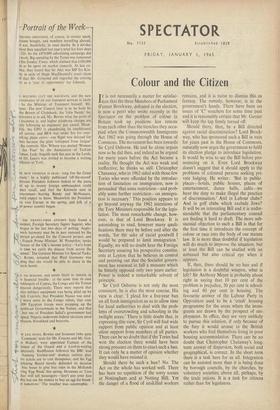 Colour and the Citizen

IT is not necessarily a matter for satisfac- tion that the three Members of Parliament (Fenner Brockway, defeated in the election, is now a peer) who wrote recently in the Spectator on the problem of colour in Britain took up positions less remote from each other than the trenches they occu- pied when the Commonwealth Immigrants Act 1962 was going through the House of Commons. The movement has been towards Sir Cyril Osborne. He and he alone argues now as he did then, and indeed as he argued for many years before the Act became a reality. He thought the Act was weak and ineffective; he thinks so still. Christopher Chataway, who in 1962 sided with those few Tories who were offended by the introduc- tion of limitation on immigration, now is persuaded 'that some restriction—and prob- ably some further restriction—on immigra- tion is necessary.' This position appears to go beyond anyway the 1962 intentions of the Tory Ministers responsible for the legis- lation. The most remarkable change, how- ever, is that of Lord Brockway. It is astonishing to read, however many quali- fications there may be before and after the words, 'for the sake of racial goodwill I would be prepared to limit immigration.' Equally, we will no doubt hear the Foreign Secretary assuring his prospective constitu- ents at Leyton that he believes in control and pointing out that the Socialist govern- ment has renewed in full a measure which he bitterly opposed only two years earlier. Power is indeed a remarkable solvent of principle.

Sir Cyril Osborne is not only the most consistent, he is also the most concise. His view is clear. 'I plead for a five-year ban on all fresh immigration so as to allow time for local authorities to deal with the prob- lems of overcrowding and schooling in the twilight areas.' There is little doubt that, in expressing this view, Sir Cyril will find wide support from public opinion and at least silent support from members of all parties. There can be no doubt that if the Tories had won the election there would have been strong pressure on them to enact such a ban. It can only be a matter of opinion whether they would have resisted it. • Should there be such 'a ban? No. The Act on the whole has worked well. There has been no repetition of the sorry scenes at Nottingham and at Notting Hill. Yet the danger of a flood of unskilled workers remains, and it is naive to dismiss this as fantasy. The remedy, however, is in the government's hands. There have been no issues of 'C' vouchers for some time past and it is reasonably certain that Mr. Gunter will keep the tap firmly turned off.

Should there, then, be a Bill directed against racial discrimination? Lord Brock- way, who has sponsored such a Bill in vain for years past in the House of Commons, naturally now urges the government to fulfil its election pledge to introduce legislation. It would be wise to see the Bill before pro- nouncing on it. Even Lord Brockway doesn't suggest that it should apply to the problems of coloured persons seeking pri- vate lodging. He writes: Tut in public places—hotels, public houses, places of entertainment, dance halls, cafés—we have the duty to make illegal the practice of discrimination.' And in Labour clubs? And in golf clubs which exclude Jews? It will be an interesting Bill and it is under- standable that the parliamentary counsel are finding it hard to draft. The more sub- stantial objection to such a Bill is that for the first time it introduces the concept of colour or race into the body of our statute law. It is more than doubtful if legislation will do much to improve the situation, but at least the Bill can be studied with an unbiased but also critical eye when it appears.

If, then, there should be no ban and if legislation is a doubtful weapon, what is left? Sir Anthony Meyer is probably about right in saying that 10 per cent of the *problem is prejudice, 30 per cent is school- ing and 60 per cent is housing. The favourite answer of the Labour Party in Opposition used to be a 'crash' housing programme for the areas where the immi- grants are drawn by the prospect of em- ployment. In office, they are very unlikely to pursue this solution, if only because of the fury it would arouse in the British workers who find themselves living in poor housing accommodation. There can be no doubt that Christopher Chataway's long- term answer of dispersion, both social and geographical, is correct. In the short term there is a task here for us all. Integration can be assisted more than it is being done by borough councils, by the churches, by voluntary societies; above all, perhaps, by the trade unions. It is a task for citizens rather than for legislators.