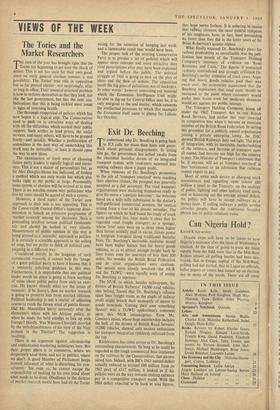 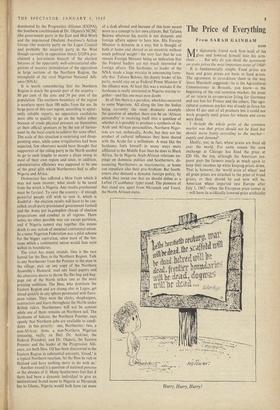 KEITH KYLE writes: Drastic steps will have to be taken to save Nigeria's existence after the farce of Wednesday's election. At the time of going to press the latest reports from the field were that in the Mid-West Region almost all polling booths had been des- troyed, that in Enugu, capital of the Mid-West, polling had not started, that in Lagos no officials, ballot papers or voters had turned up on election day in many of the wards. These are all areas

dominated by the Progressive Alliance (UGPA), the Southern combination of Dr. Okpara's NCNC (the government party in the East and Mid-West) and the imprisoned Obafemi Awolowo's Action Group (the majority party on the Lagos Council and probably the majority party in the West though currently in opposition there). UGPA pro- claimed a last-minute boycott of the election because of the apparently well-substantiated alle- gations of massive intimidation of the opposition in large sections of the Northern Region, the stronghold of the rival Nigerian National Alli- ance (NNA).

It is worth remembering that the Northern Region is much the greater part of the country- 80 per cent of the area and 54 per cent of the population. The southern boundary of the region is nowhere more than 180 miles from the sea. In large parts of this vast region, according to appar- ently reliable reports, no opposition candidates were able to qualify to go on the ballot either because of crude physical pressure on themselves or their official sponsors or by the use of harass- ment by'the local courts to achieve the same effect. The scale of this situation is surprising and disap- pointing since, while some irregularities had been expected, few observers would have thought that supporters of the ruling party in the North needed to go to such lengths to secure a clean sweep in most of their own region and since, in addition, administrative efficiency was supposed to be one of the great gifts which Northerners had to offer Nigeria and Africa.

Democracy has suffered a blow from which it may not soon recover; what needs to be saved from the wreck is Nigeria. Any results proclaimed must be farcical. To save the country—if enough powerful people still wish to save it, which is doubtful—the election results will have to be can- celled, an all-party provisional government formed and the Army put incomplete charge of election preparations and conduct in all regions. There seems no other possible way out except partition, and if Nigeria cannot stay together this means death to any notion of eventual continental union. In a sense Nigerian Federation was a pilot scheme for the bigger aspiration, since most of the ten- sions which a continental union would face exist Within its boundaries.

The crisis has many strands. One is the race hatred for the Ibos in the Northern Region. Talk to any Northerner from the Premier to the man in the village, pick up any copy of the Northern Assembly's Hansard, read any local papers and, the obsessive desire to throw the lbo bag and bag- gage out of the North strikes one as the most pressing ambition. The Ibos, who dominate the Eastern Region and are strong also in Lagos, get ahead quickly in any sphere permeated with Euro- pean values. They were the clerks, shopkeepers, contractors and fixers throughout the North under British rulers. Northerners will not be content while one of them remains on Northern soil. The Sardauna of Sokoto, the Northern Premier, says openly that Northern jobs are available to candi- dates in this priority : one, Northerner; two, a non-African; three, a non-Northern Nigerian (meaning, really, an Ibo). Dr. Azikiwe, the Federal President, and Dr. Okpara, the Eastern Premier and the leader of the Progressive Alli- ance, are both Ibos. Oil has been discovered in the Eastern Region in substantial amounts. 'Good,' is a typical Northern reaction, 'let the Ibos be rich in Iboland and have nothing more to do with us.'

Another strand is a question of national persona or the absence of it. Many Southerners feel that if there had been a dynamic individual to give an international brand name to Nigeria as Nkrumah has to Ghana, Nigeria would both have cut more

of a dash abroad and because of this have meant more as a concept to her own citizens. But Tafawa Balewa whatever his merits is not dynamic and foreign affairs appear to bore him. His Foreign Minister is dynamic in a way, but is thought of both at home and abroad as an eccentric without much political weight—the very fact that he can remain Foreign Minister being an indication that the Federal leaders are not much interested in foreign affairs. The Sardauna. as leader of the NNA, made a huge mistake in announcing form- ally that Tafawa Balewa, the deputy leader of his party, would stay on as Federal Prime Minister if the alliance won. At least this was a mistake if the Sardauna is really interested in Nigeria staying to- gether—and this one must now doubt.

In all this there is a paradox, which has occurred to some Nigerians. All along the line the Sudan being currently the most dramatic example the question of whether there can be an 'African personality' is resolving itself into a question of whether it is possible to produce a synthesis of the Arab and. African personalities. Northern Niger- ians are not, technically, Arabs, but they are the product of cultural influences they have shared with the Arabs for a millenium. A man like the Sardauna feels himself. in many ways more affiliated to the Middle East than he does to Black Africa. So in Nigeria Arab-African relations im- pinge on domestic politics and Southerners, de- nouncing Northerners as reactionaries, at home can repudiate also their pro-Arabism. But South- erners also demand a dynamic foreign policy, by which they mean one that we should define as a Leftist ('Casablanca' type) stand. The pioneers of that stand are, apart from Nkrumah and Tour& the North African states.