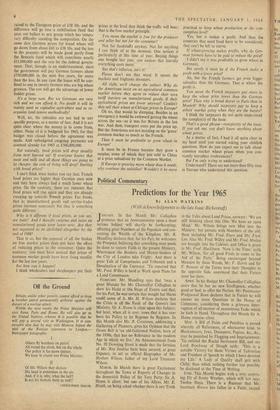 Britain, unlike other powers, cannot afford to keep bomber patrol permanently airborne against the danger of a nuclear attack.

Within the next weeks the Prime Minister will visit Bonn, Paris and Rome. He will also go to the United Nations, whence it is possible that he will pay a second visit to Washington. It is con- ceivable also that' he may visit Moscow before the visit of the Russian statesmen to London.— Newspaper paragraphs.

Others fly bombers on patrol All round the clock, but on the whole Our policy is far more sinister.

We keep in circuit one Prime Minister.

Of Mr. Wilson they declare His head is sometimes in the air.

Is not his bottom there as well?