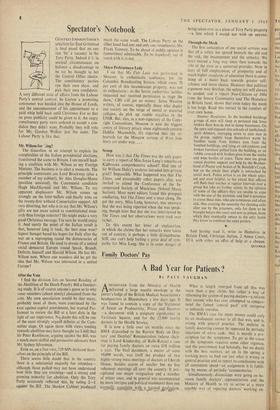 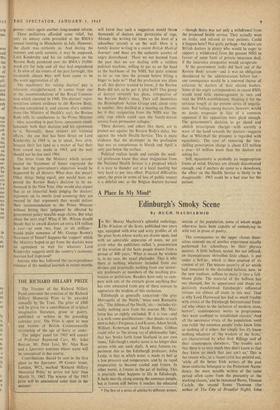 A Bad Year for Patients ?

AMESSENGLR from the Ministry of Health delivered a large manila' envelope at the porter's lodge of the British Medical Association's headquarters in Bloomsbury a few days ago. It was found to contain a copy of the Statement of Intent on Productivity, Prices and Incomes --a document with a poignant significance in Tavistock Square, and for the 23,000 • family doctors in the Health Service.

It is now a little over six months since the BMA dispatched to the Review Body on Doc- tors' and Dentists' Remuneration (whose chair- man is Lord Kindersley, of Rolls-Royce) a case for paying family doctors an extra fl 8 million a year. The final document, a matter of some 10,000 words, was itself the product of two highly-strung mass meetings of doctors at Church House, besides scores of smaller but no less vehement meetings all over the country. It pre- cipitated one major resignation and a number of minor ones, and in general was accompanied by more intrigue and political manccuvre than one n TopUy ,aismglato wja, a, Jot Fled gfp !)ion.

What at length emerged from all this was more than a pay claim, but rather a way of reforming the system of paying doctors—a reform that anyone who has ever attempted to compre- hend the famed 'central pool' will recognise as tediously overdue.

The BMA's case for more money could only he an inadequate answer to all that was, and is, w Fong with general practice. The malaise in family doctoring cannot be appeased by periodic injections of extra cash : that is merely a pre- scription for the symptoms. To get at the cause of the symptoms requires sonic other regimen, and the government had belatedly, but no doubt with the best motives. set up in the spring a working party to find out just what is wrong in general practice and to report its conclusions with all convenient speed—an assignment it is fulfill- ing by means of periodic 'commentaries.'

Simultaneously, discussions were going on be- tween family doctors', representatives and the Ministry of Health to try to arrive at a more sensible way of, repaying doctors' working ex- penses--once again another long-needed reform.

These palliatives afforded some relief, but only an uneasy calm prevailed at the BMA's annual meeting in Manchester in July. However, the claim was certainly in. And during the summer and early autumn, it may be supposed, Lord Kindersley and his six colleagues on the Review Body pondered over the BMA's 10,000- word cry for help and all that had engendered it. In view of the events of the past fortnight, this six-month silence may well have come to be the worst aggravation of all.

The machinery for raising doctors' pay is relatively straightforward. It comes from one of the recommendations of the Royal Commis- sion which reported in 1960. The doctors' repre- sentatives submit evidence to the Review Body. Having considered it, and anyone else's submis- sions (the Ministry of Health's, say), the Review Body tells its conclusions to the Prime Minister - who, according to past form, announces simul- taneously both their decision and his agreement to it. Normally, these reviews are triennial affairs: the one that has been thrust on Lord Kindersley in 1964 is, so to speak, hors serie, because their last (and as a matter of fact their first) award was made in 1963, and the next should not be due until 1966.

The letter from the Ministry which accom- panied the Statement of Intent expressed the hope that the government's objectives would be supported by all doctors. What does this mean? Other things being equal, one would have ex- pected the Review Body's decision to be an- nounced in the New Year. One would also expect that as an impartial body judging the doctors' argument on its merits (and assuming they are swayed by that argument) they would deliver their recommendation to the Prime Minister without letting their judgment be affected by government policy towaits wage claims. But what about the next step? What if Mr. Wilson should decide that to award doctors an extra £18 million a year—or even two, four, or six million— would make nonsense of Mr. George Brown's Statement of Intent? Suppose the 'support' which the Ministry hoped to get from the doctors were an agreement to wait for whatever Lord Kindersley suggests until the country's economic Position had improved?

Anyone who has followed the correspondence columns of the medical journals in recent months will know that such a suggestion would throw thousands of doctors into paroxysms of rage. Already the writing (at times on the level of a schoolboy scrawl) is on the wall. Here is a family doctor writing in a recent British Medical Journal--and these are the authentic accents of angry doctorhood: 'Have we not learned from the past that we are dealing with a ruthless political machine, willing to pat us on the head as the backbone of the NHS, but quite content to let us run into the ground before lifting a finger to help us?' Had the profession any plans at all, this doctor wanted to know, if the Review Body did not, as he put it, play ball? One group of doctors certainly has plans, irrespective of the Review Body's ideas. They call themselves the Birmingham Action Group and, about sixty in number, they decided at a meeting on Decem- ber 6 that resignation from the NHS was 'the only step which could save the family-doctor service from permanent collapse.'

These doctors, and others like them, are in protest not against the Review Body's delay, but against the whole Health Service. This is more evidence that the distemper in the profession that was so conspicuous in March and April is only just below the surface.

Political realists inside and outside the medi- cal profession know that mass resignation from the National Health Service is a proposal which it is easy to thunder out at a local meeting but very hard to put into effect. Practical difficulties apart, the price in terms of loss of public respect is a doleful one, as the Belgian doctors learned --though theirs was not only a withdrawal from the proposed health service. They actually went on strike, and refused to treat patients. Could it happen here? Not quite, perhaps—but there are British doctors in plenty who would be eager to support a withdrawal from the present NHS in favour of some form of private insurance deal, if the insurance companies would co-operate.

If the government really did back out of the Review Body system--and it was an obligation shouldered by the administration before last— one consequence would be a renewed chorus of criticism by doctors of their elected leaders. Some of the angry correspondents in recent BMJs would need little encouragement to turn and rend the BMA establishment, blaming it for the tortuous length of the present series of negotia- tions. Bad feeling among doctors, however, would no doubt evaporate in face of a common opponent if his opposition were plain enough. The government's decision to go ahead and abolish prescription charges--with scarcely a wave of the hand towards the doctors--suggests that in Whitehall the prospect is regarded with equanimity. The cost of removing the two- shilling prescription charge is about £22 million a year---£4 million more than the doctors are asking for.

Still, equanimity is probably an inappropriate frame of mind. Doctors are already discontented enough, and if matters do come to a showdown, the effect on the Health Service is likely to be disagreeable: 1965 could be a bad year for the patient.