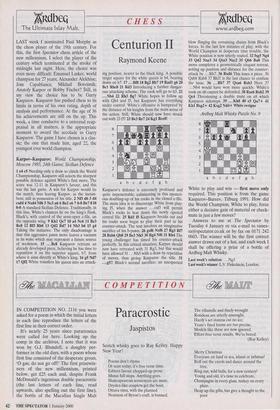 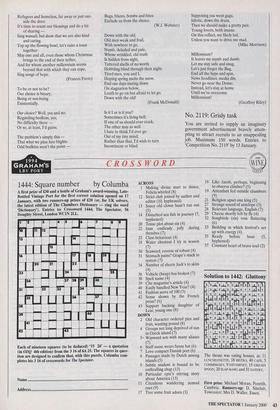 IN COMPETITION NO. 2116 you were asked for a poem in which the initial letters in each line reproduce the letters of the first line in their correct order.

It's nearly 25 years since paracrostics were called for here. Looking up the comp in the archives, I note that it was won by G.J. Blundell, a doughty per- former in the old days, with a poem whose first line consisted of the desperate groan, `0 gas, do not go off!' The first prizewin- ners of the new millennium, printed below, get £25 each and, despite Frank McDonald's ingenious double paracrostic (the last letters of each line, read upwards, also spelling out the first line), the bottle of the Macallan Single Malt Scotch whisky goes to Ray Kelley. Happy New Year!

(Ray Kelley) Merry Christmas Everyone on land or sea, island or isthmus! Roll out the carols and dance around the tree, Ring out, wild bells, for a new century! Young and old, it's time to celebrate, Champagne in every glass, turkey on every plate.

Heap up the gifts, but give a thought to the poor Refugees and homeless, far away or just out- side the door.

It's time to count our blessings and do a bit of sharing - Sing wassail, but show that we are also kind and caring.

Top up the flowing bowl, let's raise a toast together: May one and all, even those whom Christmas brings to the end of their tether, And for whom another millennium seems beyond that with which they can cope, Sing songs of hope.

(Frances Favre) To be or not to be? Our choice is binary, Being or not-being Existentially.

Our choice? Well, yes and no: Regarding bodkins, yes; No difficulty there Or so, at least, I'd guess.

The problem's simply this That what we plan fate blights. Odd bodkins aren't the point — Bugs, blazes, bombs and bites Exclude us from the choice. (W.J. Webster) Down with the old, Old men weak and frail, With nowhere to go, Numb, deluded and pale, Whose wrinkled, old truth Is hidden from sight, Tattered shells of no worth Hobbling blind through their night.

Tired men, you and I,

Hoping spring melts the snow, End our days staring down On stagnation below, Loath to go on but afraid to let go.

Down with the old! (Frank McDonald) Is it I or is it you?

Sometimes it's living hell; If one of us should ever crack, The other may as well.

I hate to think I'd ever go Out of my tiny mind; Rather than that, I'd wish to turn Incontinent or blind. Supposing you went gaga, Idiotic, down the drain, Then we should make a pretty pair, Young lovers, both insane.

On this reflect, my likely lad, Unless you want to drive me mad.

It leaves me numb and dumb.

You are invited to supply an imaginary government advertisement bravely attem- pting to attract recruits to an unappealing job. Maximum 150 words. Entries to `Competition No. 2119' by 13 January.