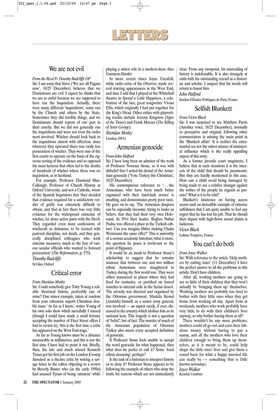 From John Halford Sir: I have long been an admirer of the work of Professor Norman Stone, so it was with disbelief that I noted his denial of the Armenian genocide (‘Vote Turkey this Christmas’, 18/25 December).

His contemptuous reference to ‘... the Armenians, who have been much better organised with their hard-luck stories’ is insulting, and demonstrates pretty poor taste. He goes on to say, ‘The Armenian diaspora can be especially tiresome, trying to make us believe that they had their very own Holocaust. In 1914 their leader, Boghos Nubar Pasha, was offered a place in the Turkish cabinet. Can you imagine Hitler making Chaim Weizmann the same offer?’ This is unworthy of a serious academic historian; what is more, the question he poses is irrelevant to the point of flippancy.

It would be an insult to Professor Stone’s scholarship to suggest that he remains unaware that between one and two million ethnic Armenians were slaughtered in Turkey during the first world war. They were either massacred in places where they had lived for centuries, or perished on forced marches to internal exile in the Syrian desert. The atrocity was directed and organised by the Ottoman government. Mustafa Kemal (Atatürk) himself, as a senior army general, was involved — an aspect rarely, if ever, discussed in the country which idolises him as its national icon. This tragedy is not a question of ‘belief’, but of fact. The murder of much of the Armenian population of Ottoman Turkey also meets every accepted definition of genocide.

If Professor Stone feels unable to accept the word genocide for what happened, then what does he prefer to call it? Some ‘local ethnic cleansing’, perhaps?

Is the task of a historian to interpret history or to deny it? Professor Stone appears to be following the example of others who deny the truth, for reasons which are not immediately clear. From any viewpoint, his misreading of history is indefensible. It is also strangely at odds with his outstanding record as a historian and scholar. I suspect that his words will return to haunt him.