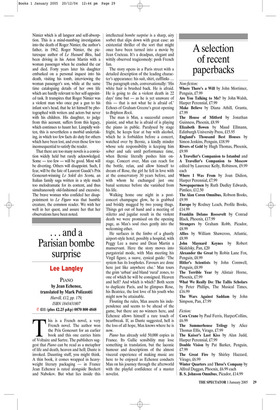 . . . and a Parisian bombe surprise

PIANO by Jean Echenoz, translated by Mark Polizzotti Harvill, £12, pp. 179, ISBN 1843431807 ® £11 (plus £2.25 p&p) 0870 800 4848 This is a French novel, a very French novel. The author won the Prix Goncourt for an earlier book and this one carries hints of Voltaire and Sartre. The publishers suggest that Piano can be read as a metaphor of life and death, heaven and hell; Dante is invoked. Daunting stuff, you might think. A thin book, it comes wrapped in heavyweight literary packaging — in France Jean Echenoz is rated alongside Beckett and Nabokov. But what lies inside this intellectual bombe surprise is a sharp, airy sorbet that slips down with great ease: an existential thriller of the sort that might once have been turned into a movie by Jean Cocteau. It’s a deadpan, elegant and wittily observed tragicomedy: posh French fun.

The story opens in a Paris street with a detailed description of the leading character’s appearance: his suit, shirt, cufflinks ... The paragraph ends, conversationally: ‘His white hair is brushed back. He is afraid. He is going to die a violent death in 22 days’ time but — as he is yet unaware of this — that is not what he is afraid of.’ Echoes of Graham Greene’s great opening to Brighton Rock.

The man is Max, a successful concert pianist, and what he is afraid of is playing the piano in public. Paralysed by stage fright, he keeps fear at bay with alcohol, which he is forbidden before a concert, watched over by Bernie, a kindly minder whose sole responsibility is keeping him sober and safe until performance time, when Bernie literally pushes him onstage. Concert over, Max can reach for the bottle, relax, and allow himself to dream of Rose, the girl he fell in love with at the conservatory 30 years before, and with whom he exchanged just one banal sentence before she vanished from his life.

Walking home one night in a postconcert champagne glow, he is grabbed and briskly mugged by two young thugs. Things get out of hand and a meeting of stiletto and jugular result in the violent death we were promised on the opening page, as Max’s soul rises gently into the welcoming ether.

He surfaces in the limbo of a ghastly airport-style hotel, possibly a hospital, with Peggy Lee a nurse and Dean Martin a manservant. Here the story moves into purgatorial mode, with Max meeting his Virgil figure, a suave, cynical guide: ‘The system has its loopholes. Favours are done here just like anywhere else.’ Max tours the grim ‘urban’ and bland ‘rural’ zones, to one of which he will be consigned. Heaven and hell? And which is which? Both seem to duplicate Paris, and he glimpses Rose, his Beatrice, the lost love of his youth who might now be attainable.

Flouting the rules, Max asserts his independence and seems to be ahead of the game, but there are no winners here, and Echenoz allows himself a rare touch of heartbreak. If, as Dante suggested, hell is the loss of all hope, Max knows where he is now.

Piano has already sold 50,000 copies in France. Its Gallic sensibility may lose something in translation, but the laconic humour and descriptions of the almost visceral experience of making music are here to be enjoyed as Echenoz conducts Max on his journey through the afterworld with the playful confidence of a master novelist.