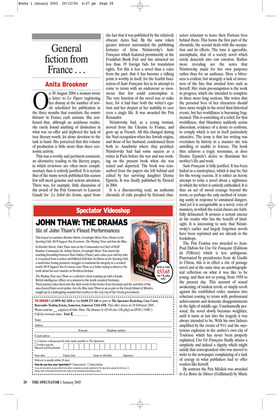 On 30 August 2004 a woman wrote a letter to Le Figaro registering her dismay at the number of novels scheduled for publication in the three months that constitute the rentrée littéraire in France each autumn. She confessed that, although an assiduous reader, she rarely found anything of distinction in what was on offer and deplored the lack of true literary worth, let alone devotion to the task in hand. She perceived that this volume of production is little more than sheer economic activity.

This was a worthy and pertinent comment, an alternative reading to the literary pages, in which reviewers are often more complimentary than is entirely justified. It is certain that of the many novels published this season few will merit genuine and serious attention. There was, for example, little discussion of the award of the Prix Goncourt to Laurent Gaudé for Le Soleil des Scorta, apart from the fact that it was published by the relatively obscure Actes Sud. By the same token greater interest surrounded the publishing fortunes of Irène Némirovsky’s Suite FranVaise which featured prominently at the Frankfurt Book Fair and has attracted no less than 19 foreign bids for translation rights. Yet this is less a novel than a voice from the past: that it has become a talking point is worthy in itself, for the fearful fascination of Suite FranVaise lies in its attempt to come to terms with an endeavour so monstrous that few could contemplate it. The very function of the novel was at stake here, for it laid bare both the writer’s egotism and her despair at her inability to save even a single life. It was awarded the Prix Renaudot.

Némirovsky had, as a young woman, moved from the Ukraine to France, and grew up as French. All this changed during the Nazi occupation when her Jewish origins, and those of her husband, condemned them both to Auschwitz where they perished. Némirovsky had had some success as a writer in Paris before the war and was working on the present book when she was seized and deported. The book was transcribed from the papers she left behind and edited by her surviving daughter Denise Epstein. It was finally published by Denoël in 2004.

It is a disconcerting read, an authentic chronicle of exile peopled by fictional char acters reluctant to leave their Parisian lives behind them. This forms the first part of the chronicle; the second deals with the occupation and its effects. The tone is agreeable, unemphatic, that of a society novel which rarely descends into raw emotion. Rather more revealing are the notes that Némirovsky made for her own purposes rather than for an audience. Here a bitterness is evident, but strangely a lack of awareness of the fate that awaited Jews such as herself. Her main preoccupation is the work in progress, which she intended to complete in three more long sections. She writes that the personal lives of her characters should have more weight in the novel than historical events, but her worldliness is becoming fragmented. This is something of a relief, for that worldliness, that blandness suddenly seems discordant, evidence of a desire to conform, to comply which is not in itself particularly attractive. The irony is that her writing was overtaken by history in a manner she was unwilling or unable to foresee. The book thus achieves a tragic resonance, as does Denise Epstein’s desire to illuminate her mother’s life and work.

Suite FranVaise is fully justified. It has been hailed as a masterpiece, which it may be, but for the wrong reasons. It is rather an heroic attempt to write a novel about a nightmare in which the writer is entirely embedded. It is thus an act of moral courage beyond the norm, or perhaps the only method of retaining sanity in response to unnatural dangers. And yet it is recognisable as a novel, even of manners, in which the social classes are faithfully delineated. It arouses a certain unease in the reader who has the benefit of hindsight. It is interesting to note that Némirovsky’s earlier and largely forgotten novels have been reprinted and are already in the bookshops.

The Prix Femina was awarded to JeanPaul Dubois for Une Vie FranVaise (Editions de l’Olivier) which is less ambiguous. Punctuated by presidencies from de Gaulle to Chirac, this is in effect a rite of passage novel and at the same time an autobiographical reflection on what it was like to be young, and then not so young, from 1958 to the present day. This account of sexual awakening, of student revolt, or simply revolt against the established order, matures into reluctant coming to terms with professional achievements and domestic disappointments in the light of middle age. Unashamedly personal, the novel slowly becomes weightier, until it turns at last into the tragedy it was always intended to be. With his own failures amplified by the events of 9/11 and the mysterious explosion in the author’s own city of Toulouse which has never been properly explained, Une Vie FranVaise finally attains a simplicity and indeed a dignity which might satisfy that correspondent who was moved to write to the newspaper complaining of a lack of energy in what publishers had to offer readers like herself.

By contrast the Prix Médicis was awarded to La Reine du Silence (Gallimard) by Marie Nimier which is all languor and self-absorption. This is a mind-numbing investigation into the death of Roger Nimier, the author’s father, in 1962. Roger Nimier, the picturesque author of Le Hussard Bleu, had been driving in his Aston Martin with a woman passenger when he crashed the car and died. Forty years later his daughter embarked on a personal inquest into his death, visiting his tomb, interviewing the woman passenger’s son, while at the same time cataloguing details of her own life which are hardly relevant to her self-appointed task. It transpires that Roger Nimier was a violent man who once put a gun to his infant son’s head, that he let himself be photographed with writers and actors but never with his children. His daughter, to judge from this account, suffers from this legacy, which continues to haunt her. Limpidly written, this is nevertheless a morbid undertaking, in which too few facts do duty for others which have been lost, and even those few too inconsequential to satisfy the reader.

That there are too many novels is a conviction widely held but rarely acknowledged. Some — too few — will be good. Most will be diverting. Others will disappoint. Such, I fear, will be the fate of Laurent Gaudé’s Prix Goncourt-winning Le Soleil des Scorta, an Italian family saga written in a style much too melodramatic for its content, and thus simultaneously old-fashioned and excessive. The brave woman who confided her disappointment to Le Figaro was that humble creature, the common reader. We wish her well in her quest, and assure her that her observations have been noted.