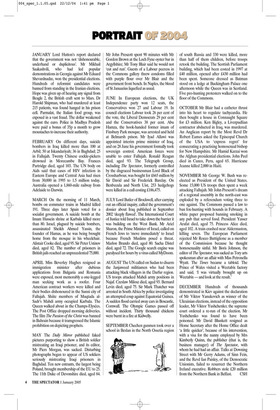 PORTRAIT OF 2004 JANUARY Lord Hutton’s report declared that the

government was not ‘dishonourable, underhand or duplicitous’. Mr Mikhail Saakashvili, who had led popular demonstrations in Georgia against Mr Eduard Shevardnadze, won the presidential elections. Hundreds of reformist candidates were banned from standing in the Iranian elections. Hope was given up of hearing any signal from Beagle 2, the British craft sent to Mars. Dr Harold Shipman, who had murdered at least 215 patients, was found hanged in his prison cell. Parmalat, the Italian food group, was exposed in a vast fraud. The dollar weakened against the euro. Police in Madhya Pradesh were paid a bonus of 35p a month to grow moustaches to increase their authority.

FEBRUARY On different days, suicide bombers in Iraq killed more than 100 at Arbil; 50 at Iskandariyah; 36 in Baghdad; 25 in Fallujah. Twenty Chinese cockle-pickers drowned in Morecambe Bay. Frances Partridge died, aged 103. The UN body on Aids said that cases of HIV infection in Eastern Europe and Central Asia had risen from 30,000 in 1995 to 1.5 million today. Australia opened a 1,860-mile railway from Adelaide to Darwin.

MARCH On the morning of 11 March, bombs on commuter trains in Madrid killed 191. Three days later Spain voted for a socialist government. A suicide bomb at the Imam Hussein shrine at Karbala killed more than 80. Israel, plagued by suicide bombers, assassinated Sheikh Ahmed Yassin, the founder of Hamas, as he was being brought home from the mosque in his wheelchair. Alistair Cooke died, aged 95. Sir Peter Ustinov died, aged 82. The number of prisoners in British jails reached an unprecedented 75,000.

APRIL Miss Beverley Hughes resigned as immigration minister after dubious applications from Bulgaria and Romania were exposed, most memorably a one-legged man seeking work as a roofer. Four American contract workers were killed and their bodies dishonoured in the Sunni city of Fallujah. Shiite members of Muqtada alSadr’s Mahdi army occupied Karbala. The Queen walked about in the Champs-Elysées. The Post Office dropped morning deliveries. The film The Passion of the Christ was banned in Bahrain because it transgressed the Islamic prohibition on depicting prophets.

MAY The Daily Mirror published faked pictures purporting to show a British soldier mistreating an Iraqi prisoner, and its editor, Mr Piers Morgan, was sacked. Disturbing photographs began to appear of US soldiers seriously mistreating Iraqi prisoners in Baghdad. Ten new entrants, the largest being Poland, brought membership of the EU to 25. The 11th Duke of Devonshire died, aged 84. Mr John Prescott spent 90 minutes with Mr Gordon Brown at the Loch Fyne oyster bar in Argyllshire; Mr Tony Blair said he would not ‘cut and run’. Guests of a Labour peeress in the Commons gallery threw condoms filled with purple flour over Mr Blair and the government front bench. In Naples, the blood of St Januarius liquefied as usual.

JUNE In European elections, the UK Independence party won 12 seats, the Conservatives won 27 and Labour 19. In council elections Labour took 26 per cent of the vote, the Liberal Democrats 29 per cent and the Conservatives 38 per cent. Abu Hamza, the hook-handed former imam of Finsbury Park mosque, was arrested and held at Belmarsh prison. Mr Iyad Allawi was appointed interim prime minister of Iraq, and on 28 June his government formally took sovereign control. American forces were unable to enter Fallujah. Ronald Reagan died, aged 93. The Telegraph Group, including The Spectator, formerly controlled by the disgraced businessman Lord Black of Crossharbour, was bought for £665 million by Sir David and Sir Frederick Barclay. On Benbecula and North Uist, 253 hedgehogs were killed in a cull costing £186,475.

JULY Lord Butler of Brockwell, after carrying out an official inquiry, called the government’s dossier about Iraq published in September 2002 ‘deeply flawed’. The International Court of Justice told Israel to take down the barrier it was building on the West Bank. Mr Ariel Sharon, the Prime Minister of Israel, called on French Jews to ‘move immediately’ to Israel because French Muslims posed a threat. Marlon Brando died, aged 80. Sacha Distel died, aged 72. The Google search engine was paralysed for hours by a virus called MyDoom.

AUGUST The UN called on Sudan to disarm the Janjaweed militiamen who had been attacking black villagers in the Darfur region. US troops attacked Mahdi army positions in Najaf. Czeslaw Milosz died, aged 93. Bernard Levin died, aged 75. Sir Mark Thatcher was arrested in South Africa by police investigating an attempted coup against Equatorial Guinea. A sudden flood carried away cars in Boscastle, Cornwall. The Olympic Games passed off without incident. Thirty thousand chickens were burnt in a fire at Kidwelly.

SEPTEMBER Chechen gunmen took over a school in Beslan in the North Ossetia region of south Russia and 330 were killed, more than half of them children, before troops retook the building. The Scottish Parliament building, which had been costed in 1997 at £40 million, opened after £430 million had been spent. Someone dressed as Batman stood on a ledge at Buckingham Palace one afternoon while the Queen was in Scotland. Five pro-hunting protesters walked on to the floor of the Commons.

OCTOBER Mr Blair had a catheter thrust into his heart to regulate tachycardia. He then bought a house in Connaught Square for £3 million. Ken Bigley, a Liverpudlian contractor abducted in Iraq, was murdered. An Anglican report by the Most Revd Dr Robert Eames asked the Episcopal Church of the USA to ‘express regret’ for consecrating a practising homosexual bishop for New Hampshire. Mr Hamid Karzai won the Afghan presidential elections. John Peel died in Cuzco, Peru, aged 65. Hurricane Jeanne killed 2,000 in Haiti.

NOVEMBER Mr George W. Bush was reelected as President of the United States. Some 15,000 US troops then spent a week attacking Fallujah. Mr John Prescott’s dream of a regional assembly in the north-east was exploded by a referendum voting three to one against. The Commons passed a law to ban fox-hunting with hounds in February. A white paper proposed banning smoking in any pub that served food. President Yasser Arafat died, aged 75. Princess Alice died, aged 102. A train crashed near Aldermaston, killing seven. The European Parliament rejected Mr Rocco Buttiglione as a member of the Commission because he thought homosexuality sinful. Mr Boris Johnson, the editor of The Spectator, was sacked as Tory arts spokesman after an affair with Miss Petronella Wyatt. The Times became a tabloid. The Prince of Wales visited a Weetabix factory and said, ‘I was virtually brought up on Weetabix — and look at the result.’ DECEMBER Hundreds of thousands demonstrated in Kiev against the declaration of Mr Viktor Yanukovich as winner of the Ukrainian elections, instead of the opposition leader, Mr Viktor Yushchenko; the supreme court ordered a re-run of the election. Mr Yushchenko was found to have been poisoned. Mr David Blunkett resigned as Home Secretary after the Home Office dealt ‘a little quicker’, because of his intervention, with a visa for the nanny employed by Mrs Kimberly Quinn, the publisher (that is, the business manager) of The Spectator, with whom he had had an affair. Talks at Downing Street with Mr Gerry Adams, of Sinn Fein, and the Revd Ian Paisley, of the Democratic Unionists, failed to resurrect the Northern Ireland executive. Robbers stole £20 million from the Northern Bank in Belfast. CSH