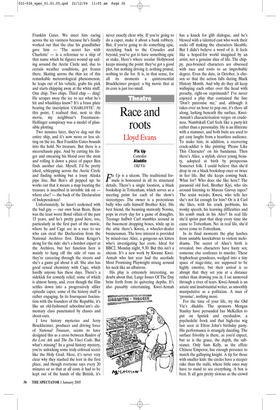 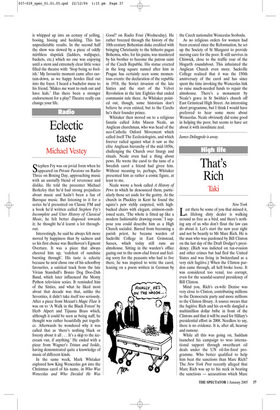 Fix Up Cottesloe Aladdin Old Vic Fix Up is a sitcom. The traditional formula is honoured in all its structural details. There’s a single location, a black bookshop in Tottenham, which serves as a meeting point for each of the show’s stereotypes. The owner is a pretentious bully who calls himself Brother Kiyi. His best friend, the beaming matronly Norma, pops in every day for a game of draughts. Teenage halfwit Carl stumbles around in the basement dropping boxes, while up in the attic there’s Kwesi, a wheeler-dealer businessman. The love interest is provided by mixed-race Alice, a gorgeous sex kitten who’s investigating her roots. Ideal for BBC2. Monday night, 9.30. But this isn’t a sitcom. It’s a new work by Kwame KweiArmah who last year had the accolade Most Promising Playwright strung around his neck like an albatross.

His play is extremely interesting, no doubt about that. Large Issues Of The Day brim forth from its quivering depths. It’s also passably entertaining. Kwei-Armah has a knack for glib dialogue, and he’s blessed with a talented cast who work their socks off making the characters likeable. But I didn’t believe a word of it. It feels like a hoped-for world imagined by an artist, not a genuine slice of life. The chippy, pea-brained characters are obsessed with race and roots to an improbable degree. Even the date, in October, is chosen so that the action falls during Black History Month. And why do they all keep walloping each other over the head with preachy, right-on reprimands? I’ve never enjoyed a play that contained the line ‘Don’t patronise me,’ and, although it takes over an hour to pop out, it’s there all along, lurking beneath the surface. KweiArmah’s characterisation verges on crudeness. Numbskull Carl feels like a party-kit rather than a personality. He is an illiterate with a stammer, and both baits are used to get easy laughs from a heartless audience. To make him, in addition, a recovering crack-addict is like printing ‘Please Like This Character’ on his bandanna. Then there’s Alice, a stylish, clever young beauty, adopted at birth by prosperous Somerset folk. I could believe that she’d drop in on a black bookshop once or twice in her life. But she keeps coming back. What for? Who does she like here? The paranoid old fool, Brother Kiyi, who sits around listening to Marcus Garvey tapes? The sexist weirdo, Kwesi, who tells her she’s not fat enough for him? Or is it Carl she likes, with his crack problems, his wonky speech, his learning difficulties and his comb stuck in his Afro? In real life she’d sprint past that shop every time she came to Tottenham. No: in real life, she’d never come to Tottenham.

In its final moments the play lurches from amiable knockabout to violent melodrama. The secret of Alice’s birth is revealed; two characters have hasty sex; someone else confesses to murder. These Sophoclean grandeurs, wedged into a tiny space of stage-time, are supposed to be highly emotive, but their arrival is so abrupt that they set you at a distance rather than drawing you in. I sat unmoved through a river of tears. Kwei-Armah is an astute and insubstantial writer, as smoothly manipulative as a politician. A man of ‘promise’, nothing more.

For the time of your life, try the Old Vic’s Aladdin. The sponsors Morgan Stanley have persuaded Ian McKellen to put on lipstick and eyeshadow, a psychedelic frock and that high-rise wig last seen at Elton John’s birthday party. His performance is strangely dazzling. The surface frivolity is there, as you’d expect, but so is the grace, the depth, the substance. Only Sam Kelly, as the effete Chinese Emperor, has enough presence to match the galloping knight. A tip for those with smaller kids: the circles have a steeper rake than the stalls, where little ones may have to stand to see everything. A box is best. It all gets pretty riotous as the crowd is whipped up into an ecstasy of yelling, booing, hissing and heckling. This has unpredictable results. In the second half the show was slowed by a piece of oddly mirthless slapstick (ladders, wallpaper, buckets, etc.) which no one was enjoying until a stern and extremely clear little voice filled the theatre with: ‘Stop being so foolish.’ My favourite moment came after curtain-down, as we happy hordes filed out into the foyer. I heard a bachelor muse to his friend, ‘Makes me want to rush out and have kids.’ Has there been a stronger endorsement for a play? Theatre really can change your life.