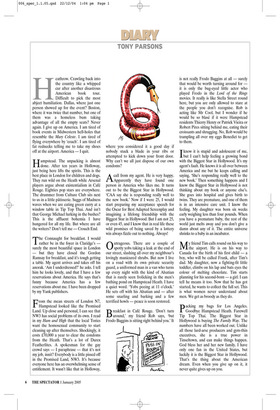 Page 5, 1 January 2005 — H eathrow. Crawling back into the country like a whipped cur
Close

H eathrow. Crawling back into the country like a whipped cur

after another disastrous American book tour. Difficult to pick the most abject humiliation. Dallas, where just one person showed up for the event? Boston, where it was twice that number, but one of them was a homeless bum taking advantage of all the empty seats? Never again. I give up on America. I am tired of book events in Midwestern hell-holes that resemble the Mary Celeste. I am tired of flying everywhere by ‘coach’. I am tired of fat rednecks telling me to take my shoes off at the airport. America — I quit.

Hampstead. The unpacking is almost done. After ten years in Holloway, just being here lifts the spirits. This is the best place in London for children and dogs. They run wild on the Heath while Arsenal players argue about existentialism in Café Rouge. Eighties pop stars are everywhere. The drummer from Culture Club sits next to us in a little pâtisserie. Suggs of Madness waves when we are eating green curry at a window table in Tip Top Thai. And isn’t that George Michael lurking in the bushes? This is the affluent bohemia I have hungered for all my life. But where are all the writers? Don’t tell me — Crouch End.

The Connaught for breakfast. I would rather be in the foyer in Claridge’s surely the most beautiful space in London — but they have closed the Gordon Ramsay for breakfast, and it’s tough getting a table. My agent arrives and takes off his anorak. ‘Am I underdressed?’ he asks. I tell him he looks lovely, and that I have a few reservations about America. He says that’s funny because America has a few reservations about me. I have been dropped by my Yank publishers.

From the mean streets of London N7, Hampstead looked like the Promised Land. Up close and personal, I can see that NW3 has social problems of its own. I read in my Ham and High that the local Tories want the homosexual community to start cleaning up after themselves. Shockingly, it costs £70,000 a year to clear the condoms from the Heath. That’s a lot of Durex Featherlites. A spokesman for the gay crowd says — I paraphrase — that it’s not my job, innit? Everybody is a little pissed off in the Promised Land, NW3. It’s because everyone here has an overwhelming sense of entitlement. It wasn’t like that in Holloway, where you considered it a good day if nobody stuck a blade in your ribs or attempted to kick down your front door. Why can’t we all just dispose of our own condoms?

Acall from my agent. He is very happy. Apparently they have found one person in America who likes me. It turns out to be the Biggest Star in Hollywood. ‘CAA say she is responding really well to the new book.’ Now if I were 25, I would start preparing my acceptance speech for the Oscar for Best Adapted Screenplay and imagining a lifelong friendship with the Biggest Star in Hollywood. But I am not 25, or even 45, and I know that in real life these wild promises of being saved by a lottery win always fizzle out to nothing. Always!

Outrageous. There are a couple of spotty yobs taking a leak at the end of our street, slashing all over my neighbour’s lovingly manicured shrubs. But now I live on a road with its own private security guard, a uniformed man in a van who turns up every night with the kind of Alsatian that is rarely seen frolicking in the men’s bathing pond on Hampstead Heath. I have a quiet word. ‘Yobs peeing at 11 o’clock.’ He sets off with his Alsatian and — after some snarling and barking and a few terrified howls — peace is soon restored.

Breakfast in Café Rouge. ‘Don’t turn around,’ my friend Rob says, ‘but Frodo Baggins is sitting right behind you.’ It is not really Frodo Baggins at all — surely that would be worth turning around for it is only the bug-eyed little actor who played Frodo in the Lord of the Rings movies. It really is like Stella Street round here, but you are only allowed to stare at the people you don’t recognise. Rob is acting like Mr Cool, but I wonder if he would be so blasé if it were Hampstead residents Thierry Henry or Patrick Vieira or Robert Pires sitting behind me, eating their croissants and shrugging. No, Rob would be trampling all over my eggs Benedict to get to them.

Iknow it is stupid and adolescent of me, but I can’t help feeling a growing bond with the Biggest Star in Hollywood. It’s my agent’s fault. He knows it is all over between America and me but he keeps calling and saying, ‘She’s responding really well to the new book.’ Then something happens and I know the Biggest Star in Hollywood is not thinking about my book or anyone else’s. She goes into hospital and gives birth to twins. They are premature, and one of them is in an intensive care unit. I know the feeling. My daughter was born six weeks early weighing less than four pounds. When you have a premature baby, the rest of the world just melts away and you don’t give a damn about any of it. The entire universe shrinks to a baby in an incubator.

My friend Tim calls round on his way to the airport. He is on his way to Canada for the birth of his first child — a boy, who will be called Frank, after Tim’s dad. My daughter, now a fighting-fit little toddler, climbs on his lap and bats eyes the colour of melting chocolate. Tim starts planning for his second-born — a girl. I can tell he means it too. Now that he has got started, he wants to collect the full set. This is what women never understand about men. We get as broody as they do.

Packing my bags for Los Angeles. Goodbye Hampstead Heath. Farewell Tip Top Thai. The Biggest Star in Hollywood is buying The Family Way. The numbers have all been worked out. Unlike all those lard-arse producers and gym-thin executives, she is a true power in Tinseltown, and can make things happen. God bless her and her new family. I have only one fan in the United States, but luckily it is the Biggest Star in Hollywood. That’s the thing about the American dream. Even when you give up on it, it never quite gives up on you.