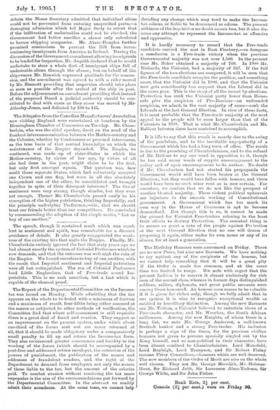 It is idle to say that this result is merely

due to the swing of the pendulum, and to the inevitable unpopularity of a Government which has had a long term of office. The result is due to the preaching of Chamberlainism, and to the refusal of Mr. Balfour to say one word in opposition to it, though he has said many words of cryptic encouragement to the policy and of open encouragement to its author. No doubt if Mr. Chamberlain had not started his propaganda the Government would still have been beaten at the General Election ; but they would have fallen with honour, and there would have been no such utter rout as is now certain. For ourselves, we confess that we do not like the prospect of another bloated majority. These violent political upheavals are injurious to the smooth working of Constitutional government. A Government which has too much its own way in the House of Commons is apt to become demoralised. But though this is so, it cannot be made the ground for Unionist Free-traders relaxing in the least their efforts to destroy Protection. The essential thing is to secure so great a vote of the people against Prctection at the next General Election that no one will dream of proposing it again, either under its own name or any of its aliases, for at least a generation.