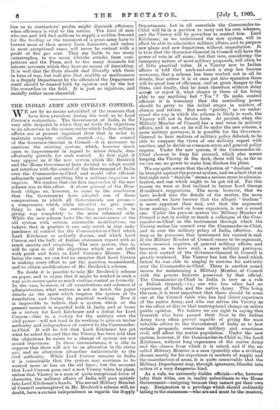 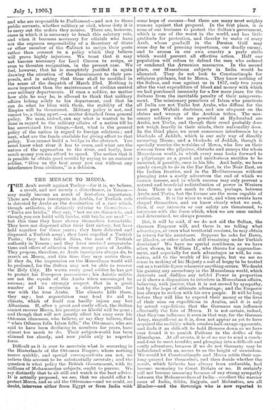 THE INDIAN ARMY AND CIVILIAN CONTROL.

WE are by no means astonished at the rumours that have been prevalent during the week as to Lord Curzon's resignation. The Government of India in the very able despatch in which they set forth the objections to an alteration in the system under which Indian military affairs are at present organised show that in order to maintain complete civilian control—i.e., the control of the Governor-General in Council—it is necessary to continue the existing system, which, however much open to improvement in regard to minor details, does effectually provide for such control. At first sight it may appear as if the new system which Mr. Brodrick and the Home Government have decided to adopt would not interfere with the control of the Government of India over the Commander-in-Chief, and would offer efficient safeguards against anything like a military imperium in imperio. We confess that our first impression of the new scheme was to this effect. A closer perusal of the Blue- book obliges us, however, to come to the conclusion that the Government have adopted one of those compromises to which all Governments are prone,— a compromise which, while intended to give some- thing to each of the contending parties, ends in giving way completely to the more vehement side. While the new scheme looks like the maintenance of the old system with certain reasonable modifications, we believe that in practice it can only result in that inde- pendence of control for the Commander-in-Chief which Lord Kitchener so ardently desires, and which Lord Curzon and the bulk of Indian statesmen regard with so much anxiety and misgiving. The new system, that is, will be open to all tho objections which are set forth with point and force in Lord Curzon's Minute. This being the case, we can feel no surprise that Lord Curzon is making every effort to get the question reconsidered, and to obtain modifications of Mr. Brodrick's scheme.

No doubt it is possible to take Mr. Brodrick's scheme on paper, and to argue that it might be worked in such a way as to secure quite as much civilian control as formerly. In the case, however, of all constitutions and schemes of administration, what matters is not so much the paper details as the spirit which inspires the system at its foundation and during its practical working. Now it is impossible to believe that a system which at the present moment is regarded both in India and at home as a victory for Lord Kitchener and a defeat for Lord Curzon—that is, a victory for the military over the civil power—will not tend in its working to give an undue authority and independence of control to the Commander- in-Chief. It will be felt that Lord Kitchener has got what he asked for, and that the Viceroy has been told that the objections he raises to a change of system are not sound objections. In these circumstances, it is idle to suppose that there will not be an alteration in the status quo, and an alteration altogether unfavourable to the civil authority. While Lord Curzon remains in India it is conceivable that the system may continue to be worked more or less on the old lines ; but the moment that Lord Curzon goes, and a new Viceroy takes his place, unless that Viceroy is a man of quite exceptional force of character, the military affairs of India will pass entirely into Lord Kitchener's hands. The second Military Member of Council contemplated in Mr. Brodrick's scheme will, no doubt, have a certain independence as regards the Supply Departments, but in all essentials the Commander-in- Chief will be in a position to carry out his own schemes, and the Viceroy will be powerless to control him. Lord. Kitchener, as we understand the new system, will in effect be able to administer military affairs, and to prepare new plans and new departures, without consultation. It is true that the Governor-General in Council will have the power of veto in all cases ; but that veto, considering the emergency nature of most military proposals, will often be of little practical value. If a Viceroy new to Indian affairs is told that such-and-such a step has become necessary, that a scheme has been worked out in all its details, that unless it is at once put into operation there will be great loss of efficiency, and, so great danger to the State, and finally, that he must therefore without delay accept or reject it, what chance is there of his being able to say anything but " Yes " P To make control efficient it is necessary that the controlling power should be privy to the initial stages in matters of change and reform. But such "privity," as we under- stand the way in which the scheme is likely to work, the Viceroy will not in future have. At present, when the Military Member of Council has a real voice in military affairs, and is not, as he will be under the new scheme, a mere military purveyor, it is possible for the Governor- General to hear matters of military policy debated, to be able to compare the views of one military expert with another, and to decide as common-sense and general policy require. Under the new system, if the Commander-in- Chief chooses to keep his counsel, which also means keeping the Viceroy in the dark, there will be, as far as we can see, no power to make him disclose his plans.

We are quite aware that the objection of "dualism" can be brought against the present system, and we admit that at first sight such " dualism " seems a serious error in adminis- tration, and one which ought to be got rid of. For this reason we were at first inclined to favour Lord George Hamilton's suggestions. The more, however, that we have looked into the details of the matter, the more convinced we have become that the alleged " dualism " is more apparent than real, and that the argument from analogy, based on home experience, is not a sound. one. Under the present system the Military Member of Council is not in reality so much a colleague of the Com- mander-in-Chief as the instrument through which the Viceroy makes his control over the Commander-in-Chief, and so over the military policy of India, effective. As long as he possesses that instrument his control is real. If the Military Member of Council ceases to be cognisant, when occasion requires, of general military affairs, and. becomes, as we have said, a. mere military purveyor, the civil control of the Governor-General in Council is greatly weakened. The Viceroy has lost the hand which, before he was able to employ to exercise his authority over the Commander-in-Chief. There is another sound reason for maintaining a Military Member of Council with the powers hitherto possessed by that official. The Commander-in-Chief in India is now as a rule a British General,—i.e., one who has often had no experience of India and the native Army. This being the case, it is most important that there should be some one at the Council table who has had. direct experience of the native Army, and. who can advise the Viceroy as to the effect of this or that contemplated change on native public opinion. We believe we are right in saying that Generals who have passed their lives in the Indian Army have often proved capable of giving the most valuable advice to the Government of India as to how certain proposals, sometimes military and sometimes civil, will affect the native population. -Under the new system, however, if the Commander-in-Chief is, like Lord Kitchener, without long experience of the native Army and the classes from which it is raised, and if the so- called Military Member is a man (possibly also a civilian) chosen merely for his experience in matters of supply and. the manufacture of arms, it is quite conceivable that the Military Department may, through ignorance, blunder into action of a very dangerous kind.

As a rule, we extremely dislike officials—who, however lofty their titles, are in reality subordinate to the Home Government—resigning because they cannot get their own way. Resignation is a privilege which should ordinarily belong to the statesmen—who are and must be the masters, and who are responsible to Parliament—and not to those public servants, whether military or civil, whose duty it is to carry out the orders they receive. There are, however, cases in which it is necessary to break this salutary rule, and when it becomes necessary for officials who have not the supreme responsibility of a Secretary of State or other member of the Cabinet to resign their posts rather than consent to a policy which they believe will prove highly injurious. We trust that it may not become necessary for Lord Curzon to resign, or even to threaten resignation, in the present case. We feel, however, that he is completely justified in again drawing the attention of the Government to their pro- posals, and in asking that these shall be modified in the sense of the despatch of March 23rd. Nothing is more important than the maintenance of civilian control over military departments. If once a soldier, no matter how able he may be, is allowed to think that military affairs belong solely to his department, and that he can do what lie likes with them, the stability of the Empire will be threatened.. Military policy is not, and cannot be, a thing apart,—a matter detached from general policy. No man, indeed, can say what is wanted to be done in regard to the military affairs of a nation till he has ascertained two things,—first, what is the general policy of the nation in regard to foreign relations ; and next, what are the funds available for giving effect to that policy. You cannot build a bridge in the abstract. You must know what river it has to cross, and what are the nature of the approaches to the river, and lastly, how much money you can afford to spend. The notion that it is possible to obtain good results by saying to an eminent soldier, "Give us the best army you can without any interference from civilians," is a delusion.