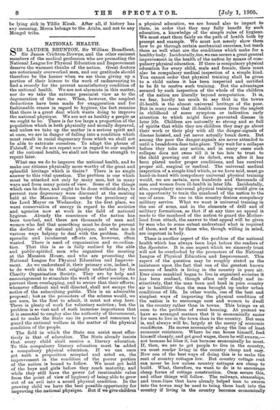 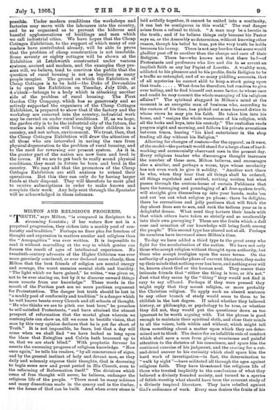 SM LAUDER BRUNTON, Sir William Broadbent, Sir James Crichton-Browne, and the other eminent members of the medical profession who are promoting the National League for Physical Education and Improvement deserve the warmest thanks of the nation. Great doctors are notoriously overworked men, and our gratitude should therefore be the keener when we see them giving up a portion of their leisure to the work of endeavouring to find a remedy for the present unsatisfactory condition of the national health. We are not alarmists in this matter, nor do we take the extreme pessimist view as to the degeneration of the race. When, however, the amplest deductions have been made for exaggeration and for fashionable crazes in regard to hygiene, the fact remains that there is a great deal which wants doing to improve the national physique. We are not as healthy a people as we ought to be. There is far too large a proportion of the population which is both physically and morally depraved, and unless we take up the matter in a serious spirit and at once, we are in danger of falling into a condition which must result in racial degeneracy from which we shall not be able to extricate ourselves. To adapt the phrase of Falstaff, if we do not repent now in regard to our neglect of the national health, we shall not have the strength to repent later.

What can we do to improve the national health, and to make our citizens physically more worthy of the great and splendid heritage which is theirs ? There is no single answer to this vital question. The problem is one which must be attacked not only by many men, but in many ways and from many points of view. Some of the things which can be done, and ought to be done without delay, to prevent race degeneracy were discussed at the meeting held at the Mansion House under the presidency of the Lord Mayor on Wednesday. In the first place, we want conservation of energy in regard to the societies and. agencies now at work in the field of national hygiene. Already the conscience of the nation has been touched, and there are thousands of men and women who feel that something must be done to prevent the decline of the national physique, and who are in various ways helping to deal with the problem. Such sporadic and incoherent efforts are, however, often wasted. There is need of organisation and co-ordina- tion. That this is so is fully realised by the able and, public-spirited men who organised the meeting at the Mansion House, and who are promoting the National League for Physical Education and Improve- ment. As we understand it, their primary aim, indeed, is to do work akin to that originally undertaken by the Charity Organisation Society. They are by help and encouragement to stimulate the work of other societies, to prevent them overlapping, and to secure that their efforts, whenever efficient and well directed, shall not escape the notice of the subscribing publics. This is an admirable proposal ; but as the promoters of the scheme would, we are sure, be the first to admit, it must not stop here. There is plenty of work for voluntary societies ; but the problem is so vast and of such immense importance that it is essential to employ also the authority of Government, and to make the State use its powers and resources to guard the national welfare in the matter of the physical condition of the people.