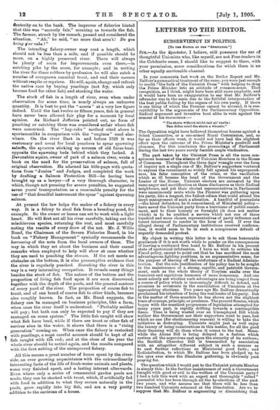 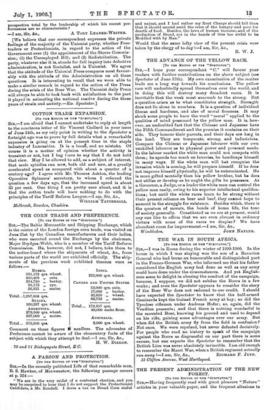 believe, still possesses the ear of thoughtful Unionists who, like myself, are not Free-traders in the Oobdenite sense, I should like to suggest to them, with your permission, some considerations for which there is' no other equally serviceable channel.

In your comments Last week on the Butler Report and Mr. Balfour's gymnastical treatment of the same, you were just enough to credit "the bulk of the Unionist Press" with helping to drag the Prime Minister. into an attitude of common-sense. That recognition, as I think, might have been still more emphatic, and it would have been no exaggeration to say that Mr. Balfour's mirrender was in the main due to the faithful interpretation of the best public feeling by the organs of his own party. If there is one thing of which the Premier cannot be accused, it is sus- ceptibility to the arguments of the Parliamentary Opposition. Radical argument and invective beat alike in vain against the armour of his insouciance :—

The Opposition might have bellowed themselves hoarse against a Select Committee, or a one-armed Royal Commission, and, so far as their efforts went, it would not have had the slightest effect upon the outcome of the Prime Minister's goodwill and pleasure. For this conclusion the proceedings of Parliament during the last two years surely furnish ample vindication.

The part taken by the Unionist Press is all the more con- spicuous because of the silence of Unionist Members in the House of Commons. Throughout the three days' wrangle over the form of inquiry not a single one of Mr. Balfour's supporters ventured to express the resentment so widely felt against his unprepared- ness, his false conception of the crisis, or the vacillation which so ill became the head of the Government and the Leader of the House. Unionist electors are animated by the Same anger and mortification at these disclosures as their Radical neighbours, and yet their elected representatives in Parliament were unanimously mute while the Premier was gathering upon his party, like a magnet, the fullest odium that could attend the inept management of such a situation. A handful of journalists —the hired defenders, be it remembered, of Ministerial policy— have saved the Unionist party from a hurricane of public resent- ment, and to their honesty or foresight (it does not matter which) is to be credited a service which not one of three hundred and more chosen representatives of party influence and talent intervened to render in the hour of need. If ever the alleged decay of Parliamentary institutions received confirma- tion, it would seem to be in such a conspicuous default of urgently demanded protest.

My object in writing this letter is to ask these honourable gentlemen if it is not worth while to ponder on the consequences of leaving a continued free hand to Mr. Balfour in his present state of egotistical infatuation. I have no wish to criticise his Fiscal policy, except to point out that he has sacrificed the most advantageous fighting positions, in an argumentative sense, for the purpose of staving off the misfortune of a Radical Adminis- tration. But the sole justification of his policy has to be sought in the maintenance of a strong, capable, and patriotie Govern- ment, such as the whole theory of Toryism exalts over the transient and capricious humours of mere democracy. And one must soberly ask whether such advantages are being reaped from a course of policy which is increasingly difficult to defend, and promises to eventuate in the annihilation of Unionism at the approaching elections. Two years ago Mr. Balfour dramatically proclaimed his intention of being the real leader of his party. But in the matter of these scandals he has shown not the slightest trace of courage, principle, or prudence. The present Session, which began with the scantiest programme of legislation attempted for many years past, is rapidly drifting towards a contemptible fiasco. Time is being wasted over an Unemployed Bill which neither the Government nor their supporters want to pass, but which no one (far electioneering reasons) is willing to take the initiative in destroying. Unionists might just as well enjoy the luxury of being conscientious in this matter, for all the good their finessing will do them when it comes to the test. Mean- while the Aliens Bill is being delayed in a fashion which revives all the aspersions cast upon the sincerity of its authors; the Scottish Churches Bill is trammelled by association with an altogether different subject in such a manner as to cast further reflections on Ministerial good faith ; and Redistribution, to which Mr. Balfour has been pledged up to the eyes ever since the Blenheim gathering, is obviously past praying for.

The question which I would put to the Unionist private Member is simply this: Is the further maintenance of such a Government fraught with good or evil to the welfare of the Unionist party ? I had a talk this week with an expert and thoroughly "salted" journalist who has been through all the by-elections of the past two years, and who assures me that there will be less than two hundred Unionists returned at the Dissolution. Are we to

suppose that Mr. Balfour is augmenting or diminishing that , am, Sir, &a., A TORY LEADER-WRITER.

[We believe that our correspondent expresses the private feelings of the majority of the Unionist party, whether Free- traders or Protectionists, in regard to the action of the Government over (1) the appointment of the Stores Commis- sion; (2) the Unemployed Bill; and (3) Redistribution. The party, whatever else it is, stands for full inquiry into defective administration, is not Socialist, and is Unionist. We agree that the attitude of the Unionist Press compares most favour- ably with the attitude of the Administration on all these questions. It is interesting to recall that we were able to make a similar remark in regard to the action of the Press daring the erisis of the Boer War. The Unionist daily Preas will always be able to look back with satisfaction to the part it played in animating the national resolve daring the throe years of strain and anxiety.—ED. Spectator.] COTTON TRADE EXPANSION.