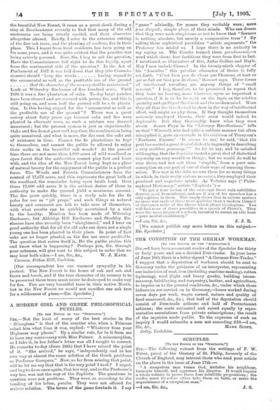 Snt,—I have been a constant reader of the Spectator for thirty or forty years and am a decided Free-trader. In your issue of June 10th there is a letter signed "A German Free-Trader." I suggest that a deputation of workmen should be sent to Germany under the guidance of an interpreter, representing our industries of coal, iron (including machine-making), cotton (spinning), wool (light and heavy goods), building (stone- masonry, bricklaying, and carpentry), leather, and agriculture, to inquire as to the general conditions, Sic., under which these industries are carried on in Germany,—hours worked during seven days per week, wages earned, nature and quality of food consumed, &c., &c. that half of the deputation should consist of Free-trade artisans and half of Protectionist artisans; the costs estimated and raised equally by repre- sentative associations from private subscriptions ; the result of the inquiries made public. To the expenses of such an inquiry I would subscribe a sum not exceeding 210.—I am, Sir, Sic., Maim Scow. Selby, Yorkshire.