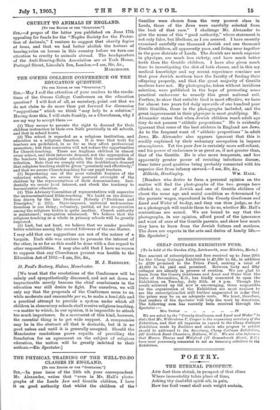 [To THE EDITOR OP THE " SPECTATOR.1 SIB,—May I call

the attention of your readers to the resolu- tions of the Owens College Conference on the education question ? I will first of all, as secretary, point out that we do not claim to do more than put forward for discussion " suggestions " which we think "may help to a solution." Having done this, I will state frankly, as a Churchman, why I

see my way to accept them :— (1) They secure to parents the right to demand for their children instruction in their own faith practically in all schools, and that in school hours.

(2) The school is regarded as a religious institution, and education as a religious function. It is true that tests for teachers are prohibited, in so far as they affect professional promotion; but that concession will not reduce the opportunities for Church-teaching. There are Anglican children in almost every school, and their interests demand, not the aggregation of the teachers into particular schools, but their reasonable dis- tribution. Note that we comply with the Archbishop's demand that religions teaching shall be given "genuinely and effectively," and that we secure Church-teaching for our pupil teachers.

(a) Reproducing one of the most valuable features of the voluntary schools, we secure the pastoral oversight of the children by the representatives of their denominations. Inci- dentally we create local interest, and check the tendency to bureaucratise education.

(4) This Advisory Committee of representatives will supervise the =denominational Bible-teaching. We build on the distinc- tion drawn by the late Professor Moberly (" Problems and Principles," p. 225). State-imposed, universal =denomina- tionalism is one thing; voluntary, partial, ad hoc co-operation among the religious bodies is quite another. Church authority is maintained; segregation minimised. We believe that the religious teaching as a whole in primary schools will be greatly improved.

(5) Last, but not least, we believe that we render possible better relations among the severed followers of the one Master.

I may add that our suggestions are not of the nature of a bargain. Each side was anxious to promote the interest of the other, in so far as this could be done with a due regard to other responsibilities. I may also add that I have no reason to suppose that any Churchman present was hostile to the Education Act of 1902.-1 am, Sir, etc., H. J. BARDSLEY.

[We trust that the resolutions of the Conference will be calmly and sympathetically discussed, and not set down as impracticable merely because the chief combatants in the education war still desire to fight. For ourselves, we will only say that the proposals of the Conference seem to us, while moderate and reasonable per se, to make a bond-fide and a practical attempt to provide a system under which all children in elementary schools shall receive religious teaching, —a matter to which, in our opinion, it is impossible to attach too much importance. In a movement of this kind, however, the essential thing is to get wide support. A compromise may be in the abstract all that is desirable, but it is no good unless and until it is generally accepted. Should the Manchester resolutions prove capable of providing the foundation for an agreement on the subject of religious education, the nation will be greatly indebted to their authors.—En. Spectator.]