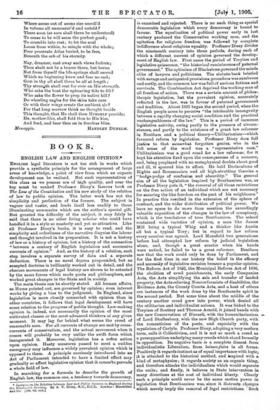 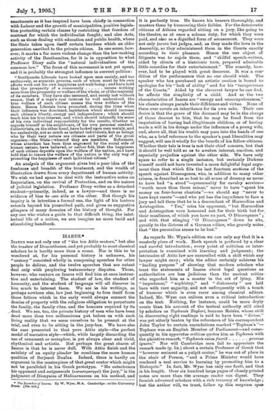 Page 24, 1 July 1905 — ENGLISH legal literature is not too rich in works which
Close

ENGLISH legal literature is not too rich in works which

provide a synthetic principle for the arrangement of large areas of knowledge, a point of view from which an organic development can be realised. But such 'representatives of this class as we possess are of high quality, and near the top must be ranked Professor Dicey's famous book on The Low of the Constitution and his new study of the relation of law to public opinion. The latter work has not the simplicity and perfection of the former. The subject is vaguer and vaster, and lends itself less readily to those illuminating summaries which are the author's special gift. But granted the difficulty of the subject, it may fairly be said that there is no other living scholar who could have handled it in a style so masterly and yet so attractive. Like all Professor Dicey's books, it is easy to read, and the simplicity and orderliness of the narrative disguise the labour and thought involved in its preparation. It is not a history of law or a history of opinion, but a history of the connection "between a century of English legislation and successive currents of opinion." And, as the history of a relation, each step involves a separate survey of data and a separate deduction. There is no novel dogma propounded, but an accepted doctrine is brilliantly worked out in detail, and the obscure movements of legal history are shown to be actuated by the same forces which made poets and philosophers, and worked great changes in the State and in society.

The main thesis can be shortly stated. All human affairs, as Hume pointed out, are governed by opinion ; even interest works by giving a bias to the judgment. In England, since legislation is more closely connected with opinion than in other countries, it follows that legal devnlopment will have some relation to the progress of public thought. Law-making opinion is, indeed, not necessarily the opinion of the most cultivated classes or the most advanced thinkers at any given moment. It may lag far behind what seems the creed of reasonable men. • For all currents of change are met by cross- currents of conservatism, and the actual movement when it comes will probably be very unlike the swift force which inaugurated it. Moreover, legislation has a reflex action upon opinion. Hasty measures passed to meet a sudden emergency may influence a widely prevalent opinion which is opposed to them. A principle carelessly introduced into an Act of Parliament intended to have a limited effect may gradually so affect legislative opinion that it comes'to pervade a whole field of law.

In searching for a formula to describe the growth of English law, the common one, a tendency towards democracy,

* Lectures on the Relation between Law and Public Opinion in England during the Nineteenth Century. By A. V. Dicey, LC., D.C.L. London Macmillan and Co. [10e. 64. net.] is examined and rejected. There is no such thing as special democratic legislation which every democraey is bound to favour. The equalisation of political power early in last century produced the Conservative working man, and the agitation for religious freedom was followed by complete indifference about religions equality. Professor Dicey divides the nineteenth century into three periods, during each of which a different current of opinion governed the develop- ment of English law. First came the period of Toryism and legislative quiescence, "the historical reminiscence of paternal government." The optimism of Blackstone governed the minds alike of lawyers and politicians. The statute-book bristled with savage and antiquated provisions, procedure was cumbrous and costly, and the common law was full of curious fictions and survivals. The Combination Act deprived the working man of all freedom of action. There was a certain amount of phihm-, thropie legislation, bat the prevalent opinion, accurately reflected in the law, was in favour of paternal government and tradition. About 1825 began the second period, when the English people came to perceive "the intolerable incongruity between a rapidly changing social condition and the practical unchangeableness of the law." This is a period of immense legislative activity, owing partly to the pressure of circum- stances, and partly to the existence of a great law reformer in Bentham and a political theory—Utilitarianism—which favoured reform by legislation. Professor Dicey does full justice to that somewhat forgotten genius, who in the full sense of the word was a "representative man." Utilitarianism was a good creed for a law reformer, for it kept his attention fixed upon the consequences of a measure, and, being perplexed with no metaphysical doubts about good and ill, it spurred him to effort. He held Declarations of Rights and Rousseauism and all high-strutting theories a " hodge-podge of confusion and absurdity." The general aim of all the legislation inspired by Benthamism was, as Professor Dicey puts it, "the removal of all those restrictions on the free action of an individual which are not necessary for securing the like freedom on the part of his neighbours." In practice this resulted in the extension of the sphere of contract, and the wider distribution of political power. We have no space to do more than mention the exceedingly valuable exposition of the changes in the law of conspiracy, which is the touchstone of true Bentharnism. The school contained wide varieties of opinion, a man like James Mill being a typical Whig and a thinker like Austin all but a typical Tory; but in regard to law reform every member was agreed. Lord Mansfield two generations before had attempted law reform by judicial legislation alone, and, though a great creator when his hands were untied, he failed to be a great reformer. Bentham saw that the work could only be done by Parliament, and for the first time in our history the belief in the efficacy and necessity of legislative revision became a popular opinion. The Reform Act of 1832, the Municipal Reform Act of 1836, the abolition of cruel punishments, the early Companies Acts, the Acts simplifying the sale and transfer of landed property, the Acts relieving Nonconformists of disabilities, the Evidence Acts, the County Courts Acts, and a host of others are instances of the work done by the Benthamite spirit in. the second period. But some time about the middle of the. century another creed grew into power, which denied all the utilitarian and individualist axioms. It was linked to the Toryism of Southey and Thomas Arnold, it joined hands with the new Conservatism of Disraeli, with the humanitarianism of Lord Shaftesbury, with the new High Church party, with' the romanticism of the poets, and especially with the mysticism of Carlyle. Professor Dicey, adopting a very modern term, calls it Collectivism, and it is not so much a creed as a presupposition underlying many creeds which stand formally in opposition. Its negative basis is a complete dissent from individualistic Liberalism, from laissez-faire in all forms. Positively it regards instinct as of equal importance with logic; it is attached to the historical method, and inspired with a kind of metaphysics ; it regards society as an organic thing; and therefore attacks the individualism which would separate the units ; and finally, it believes in State intervention in many directions at the cost of individual liberty. Clearly such a principle could never be the same motive power in legislation that Benthamism was, since it distrust, changes which merely imply the removal of legal restrictions. ' Such

tion protecting certain classes by restricting that freedom of contract for which the individualist fought; and also Acts, such as those dealing with education and public health, where the State takes upon itself certain burdens which an older generation ascribed to the private citizen. In one sense, how- ever, it marks a far more violent change than the law-making activity of the Benthamites, for it is in opposition to what Professor Dicey calls the "natural individualism of the common law." The force of this movement is not yet spent, and it is probably the strongest influence in current politics :

"Benthamite Liberals have looked upon men mainly, and too exclusively, as separate persons, each of whom must by his own efforts work out his own happiness and well-being ; and have held

that the prosperity of ' a community means nothing more than the prosperity or welfare of the whole, or of the majority of its members. They have also assumed, and surely not without reason, that if a man's real interest be well understood, the true welfare of each citizen means the true welfare of the State. Hence Liberals have promoted, during the time when their influence was dominant, legislation which should increase each citizen's liberty, energy and independence ; which should teach him his true interest, and which should intensify his sense of his own individual responsibility for the results, whether as regards himself or his neighbours, of his own personal conduct. Collectivists, on the other hand, have looked upon men mainly, and too exclusively, not so much as isolated individuals, but as beings who by their very nature are citizens and parts of the groat organism—the State—whereof they are members. Reformers, whose attention has been thus engrossed by the social side of human nature, have believed, or rather felt, that the happiness of each citizen depends upon the welfare of the nation, and have held that to insure the welfare of the nation is the only way of promoting the happiness of each individual citizen."

An anal,ysis of the argument gives but a poor idea of the freshness and breadth of the treatment, and the wealth of illustration drawn from every department of human activity.

We wish we had space to deal with the instructive notes on Imperialism, on the revival of Protection, and on the nature of judicial legislation. Professor Dicey writes as a detached student—primarily, indeed, as a lawyer—and there is no evidence of bias to one side or the other. But though his inquiry is in intention a formal one, the light of his lantern extends beyond his prescribed path, and gives us suggestive glimpses of many domains of the history of thought. For any one who wishes a guide to that difficult thing, the intel- lectual life of a nation, we can imagine no more lucid and stimulating handbook.