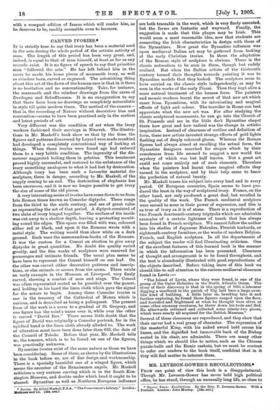 IT is strictly true to say that ivory has been

a material used in the arts during the whole period of the artistic activity of man. The length of this period has been very great, and, indeed, is equal to that of man himself, at least as far as any records exist. It is no figure of speech to say that primitive man "followed the arts." He has left behind him in the caves be made his home pieces of mammoth ivory, as well as reindeer born, carved or engraved. The astonishing thing about this art of the dawn of the human race is that in it there is no hesitation and no conventionality. Take, for instance, the mammoth and the reindeer drawings from the eaves of Dordogne and Schaffhausen. It is no exaggeration to say that there have been no drawings so completely naturalistic in style till quite modern times. The method of the camera— that is, the recording of Nature without decorative bias and convention—seems to have been practised only in the earliest and latest periods of art.

Very different was the condition of art when the ivory workers fashioned their carvings in Nineveh. The illustra- tions in Mr. Maskell's book show us that by the time the figures and patterns discovered by Layard were made mankind had developed a completely conventional way of looking at things. When these ivories were found age had reduced them to a very brittle condition. The ingenuity of the dis- coverer suggested boiling them in gelatine. This treatment proved highly successful, and restored to the substance of the ivory something analogous to what it had lost by desiccation. Although ivory has been such a favourite material for sculpture, there is danger, according to Mr. Maskell, of the supply coming to an end. The destruction of elephants has been enormous, and it is now no longer possible to get ivory the size of some of the old pieces.

A very interesting series of ivories have come down to us from late Roman times known as Consular diptychs. These range from the third to the sixth century, and are of great value as representing the art of that period. A diptych consisted of two slabs of ivory hinged together. The surface of the inside was cut away to a shallow depth, leaving a protecting mould- ing round the edges. This space was filled with wax, coloured either red or black, and upon it the Romans wrote with a metal style. The writing would thus show white on a dark ground. Such were the memorandum-books of the Romans. It was the custom for a Consul on election to give away diptychs in great quantities. No doubt the quality varied greatly, and the fine works of sculpture were reserved for personages and intimate friends. The usual plan seems to have been to represent the Consul himself on one leaf. On the other was carved either decorative patterns and inscrip- tions, or else animals or scenes from the arena. There exists an early example in the Museum at Liverpool, very finely carved, showing a combat of men and stags. The Consul was often represented seated as he presided over the games, and holding in his hand the linen cloth which gave the signal for the actors to begin. Among these Consular ivories is one in the treasury of the Cathedra of Monza which is curious, and is described as being a palimpsest. The present form of the work is a cover to a gradual of St. Gregory, and one figure has the saint's name over it, while over the other is carved "David Rex." There seems little doubt that the figure of David was originally a Consular portrait, for in the uplifted hand is the linen cloth already alluded to. The work of alteration must have been done later than 633, the date of the Council of Toledo. Before that year, Mr. Maskell tells us, the tonsure, which is to be found on one of the figures, was practically unknown.

Byzantine ivories exist of the same nature as those we have been considering. Some of these, as shown by the illustrations in the book before us, are of fine design and workmanship. There is a specially beautiful one of a winged figure, which seems the ancestor of the Renaissance angels. Mr. Maskell criticises a very curious carving which is in the South Ken- sington Museum, and doubts wAder which head it ought to be classed. Byzantine as well as Northern European influence

are both traceable in the work, which is very finely executed. but the forms are fantastic and wayward. Finally, the suggestion is made that this plaque may be Irish. This would seem a most reasonable idea, now that students are connecting the Irish characteristics in design with those of the Byzantines. How great the Byzantine influence was upon mediaeval Italian art may be gathered from looking at the early Christian ivories. In these the adaptation of the Roman style of sculpture is obvious. There is the classic naturalism to be seen in them, though hut rudely realised. But when the Italian artists of the thirteenth century turned their thoughts towards painting it was to Byzantine models that they looked. The sculptors seem to have carried on the classic style independently, as may be seen in the works of the early Pisani. Thus they kept alive a more natural treatment of the human form. The painters and mosaic workers learnt the secret of that new art which came from Byzantium, with its intoxicating and magical effects of light and colour. The traveller in Rome can best appreciate what the new art was. For after studying the classic sculptured monuments, he can go into the Church of St. Prassede and see in the little dark Byzantine chapel there how great and how radical was the change in artistic inspiration. Instead of clearness of outline and definition of form, these new artists invented strange effects of gold lights flashing out of deeply coloured gloom. Whereas the Roman figures had always aimed at recalling the actual form, the Byzantine designers searched for shapes which by their remoteness from life seemed to suggest a new world the mystery of which was but half known. But a great art could not come entirely out of such elements. Therefore when the painters had learnt these magical effects they turned to the sculptors, and by their help came to know the perfection of natural beauty.

Mr. Maskell traces his subject into every land and in every period. Of European countries, Spain seems to have pro- duced the least in the way of sculptured ivory. France, on the other band, not only produced a great deal, but excelled in the quality of the work. The French mediaeval sculptors were second to none in their power of expression, and this is as true of ivory as it is of stone. There is a reproduction of two French fourteenth-century triptychs which are admirable examples of a certain lightness of touch that has always been found in French sculpture. We cannot follow the author into his studies of Japanese Netsukes, Flemish tankards, or eighteenth-century furniture, or the works of modern Belgian, French, and English sculptors. In all the departments of the subject the reader will find illuminating criticism. One of the excellent features of this learned book is the manner in which the information has been presented. Clearness of thought and arrangement is to be found throughout, and the text is abundantly illustrated with good reproductions of the objects described. Before taking leave of this book we should like to call attention to the curious mediaeval chessmen found in Lewis :—

" The Island of Lewis, where they were found, is one of the group of the Outer Hebrides in the North Atlantic Ocean. The story of their discovery is that in the spring of 1831 a labourer digging a sandbank in the parish of Uig laid bare a large oven- like kind of building. A little later on, breaking into it and further exploring, he found these figures ranged upon the floor, and horrified and frightened at what he thought were elves or some other uncanny creatures, he threw down his tools and fled. He afterwards returned and collected some ninety-two pieces, which were nearly all acquired for the British Museum."

Several of these chessmen are reproduced, and they show that their carver had a real grasp of character. The expression of the masterful King, with his naked sword held across his knees, and the dignified but immovable back of the Bishop seated in his chair, are admirable. There are many other things which we should like to notice, such as the Chinese puzzle-balls and the Runic caskets, but we must be content to refer our readers to the book itself, confident that in it they will find matter to interest them.