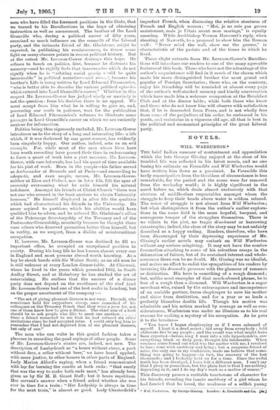 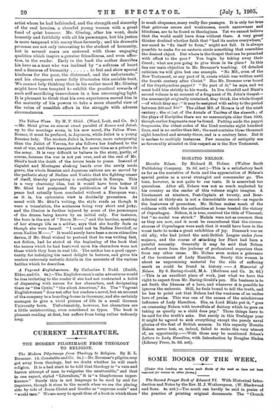 WILL WU:MURTON.* which the late George Gissing enjoyed at the

close of his troubled life was reflected in his latest novels, and no one

basing his estimate on Veranilda and Will Warburton, would have written him down as a pessimist. In Veranilda this tardy emancipation from the thraldom of circumstance is less

remarkable, for the period and the scene were far removed from the workaday world ; it is highly significant in the novel before us, which deals almost exclusively with that stratum of middle-class respectables amongst whom the struggle to keep their heads above water is seldom relaxed. The sense of struggle is not absent from Will Warburton; but what distinguishes it from the author's earlier explora- tions in the same field is the more hopeful, buoyant, and courageous temper of the strugglers themselves. There is no villain in the plot, no tragic delwit m6nt or harrowing catastrophe ; indeed, the close of the story may be not unfairly described as a happy ending. Readers, therefore, who have been discouraged by their depressing experience of Mr.

G-issing's earlier novels may embark on Will Warburton. without any serious misgiving. It may not have the sombre fascination attaching to some of his relentless essays in the delineation of failure, but of its sustained interest and whole- someness there can be no doubt. Mr. Gissing was no idealist, and makes no effort to enlist the sympathies of his readers by investing his dramatis personae with the glamour of romance or distinction. His hero is something of a rough diamond ; but, unlike most examples of that much-abused phrase, he is less of a rough than a diamond. Will Warburton is a sugar merchant who, ruined by the extravagance and incompetence

of an amiable partner, turni3 shopkeeper to save his mother and sister from destitution, and for a year or so leads a perfectly blameless double life. Though his motive was admirable and his action marked by courage as well as con-

siderateness, Warburton was under no illusions as to his real reasons for making a mystery of his occupation. As he puts it to the heroine-

" You know I began shopkeeping as if I were ashamed of myself. I kept it a dead Secret; hid away from everybody ; told elaborate lies to my people ; and the result was what might have been expected—before long I sank into a vile hypochondria, saw everything black or dirty grey, thought life intolerable, When common sense found out what was the matter with me, I resolved to have done with snobbery and lying ; but a sanguine friend of mine, the only one in my confidence, made me believe that some- timing was going to happen—in fact, the recovery of the lost thousands ; and I foolishly held on for a time. Since the awful. truth has been divulged, I have felt a different man. I can't say. that I glory in grocerdom, but the plain fact is that I see nothing degrading in it, and I do my day's work as a matter of course."

This discovery proves a veritable touchstone of character for his friends, revealing the innate snobbery of a girl whom he

had fancied that he loved, the weakness of a selfish young

* WiLL Warburton. By George aiming. London : A. Constable and Co. [el.] artist whom he had befriended, and the strength and sincerity of the real heroine, a cheerful young woman with a great fund of quiet humour. Mr. Gissing, after his wont, deals honestly and faithfully with all his personages, but his justice is more tempered with mercy than formerly; and his dramatis personae are not only interesting to the student of humanity, but in several cases are endowed with those engaging qualities which inspire a genuine friendliness, and even affec- tion, in the reader. Early in the book the author describes his hero as a man who was inclined by "a softness of heart and a fineness of humanity to feel and show special kindness for the poor, the distressed, and the unfortunate," and his chequered career fully illustrates this amiable trait. We cannot help thinking that in his earlier mood Mr. Gissing might have been tempted to exhibit the practical rewards of such self-sacrificing benevolence in a less encouraging light. It is pleasant to think that his own experiences moved him in the maturity of his powers to take a more cheerful view of the value of unselfish effort in the struggle with adverse circumstances.

The Yellow Wave. By M. P. Shiel. (Ward, Lock, and Co. 6s.) —Mr. Slid gives an almost exact parallel of Romeo and Juliet, up to the marriage scene, in his new novel, The Yellow Wave. Romeo, it must be prefaced, is Japanese, while Juliet is a young Russian lady. The modern Juliet is, however, more enterprising than the Juliet of Verona, for she follows her husband to the seat of war, and there masquerades for some time as a private in the army. It is very difficult to believe in the story, partly, of course, because the war is not yet over, and at the end of Mr. Shiers book the death of the lovers leads to peace. Instead of Capulet and Montague shaking hands over the newly made grave, the whole Russian and Japanese nations are so moved by the pathetic story of Nadine and Yoshio that the fighting ceases of itself, thereby preventing a conflagration in Europe. This is a very charming idea, but it would have been better if Mr. Shiel had postponed the publication of his book till peace had actually been concluded without a European war; as it is, his optimistio view is decidedly premature. As usual with Mr. Shiers writing, the style reads as though it were a translation, the sentences being very short and jerky, and the illusion is further injured by some of the personages of the drama being known by an initial only. For instance, the hero is the son of "Baron M—," and the heroine, speaking of her strange life as a soldier, says that she hardly feels as though she were herself. "I could not be Nadine Devriloff, or even Nadine M—." It would surely have been a more attractive device, if Mr. Shiel wished to pretend that he was writing faot not fiction, had he stated at the beginning of the book thai the names which he had bestcwed upon his characters were not those which they bora in real life. The author has a good oppor- tunity for indulging his usual delight in horrors, and gives his readers extremely realistic details in the accounts of the various battles which he describes.

A Vagrant Englishwoman. By Catherine I. Dodd. (Smith, Elder, and Co. 6s.)—The Englishwoman's calm adventures would be less irritating to the reader if she had not contracted a habit of dispensing with names for her characters, and designating them as "the Cynic," "the silent American," etc. The "Vagrant Englishwoman" does not offer her readers a novel, but an account of the company in a boarding-house in Germany, and she certainly rianages to give a vivid picture of life in a small German University town. Unfortunately, however, her characters are a little uninteresting, even considered as types. The book is pleasant reading at first, but suffers from being rather tediously long.