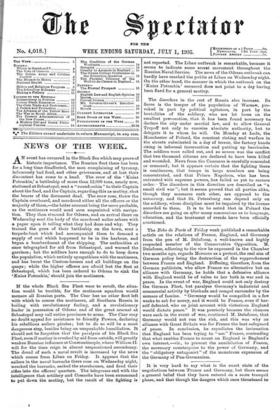 stationed at Sebastopol, sent a " round-robin " to their Captain about the food, and the Captain, regarding this as mutiny, shot the bearer of the document dead. The crew rose, threw the Captain overboard, and murdered either all the officers or the majority of them,—the latter account being the more probable, as the mutineers would need men acquainted with naviga- tion. They then steamed for Odessa, and on arrival there on Wednesday sent the body of the murdered sailor ashore with a paper upon it telling what they had done and why. They trained the guns of their battleship on the town, sent a torpedo-boat which bad accompanied them to demand a supply of coal which happened to be in the harbour, and began a bombardment of the shipping. The authorities at once telegraphed for aid from Sebastopol, and warned the garrison ; but the soldiers have enough to do to keep down the population, which entirely sympathises with the mutineers, and has burnt the Custom-houses and all buildings on the quays ; while the higher officers are afraid lest the fleet at Sebastopol, which has been ordered to Odessa to sink the Potemkin,' should join the mutineers.