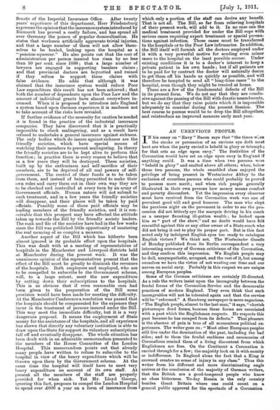 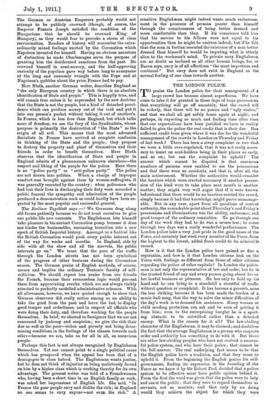 TN his essay on " Envy " Bacon says that " tbe times wen the stroke or percussion of an envious eye cloth most hurt are when the party envied is beheld in glory or triumph ; for that sets an edge upon envy." The festivities of the Coronation would have set an edge upon envy in England if anything could. It was a time when two persons were " beheld in glory" and exalted above all others; when, below those two persons, the whole ennobled class enjoyed the privilege of being present in Westminster Abbey to the exclusion of countless persons who could probably be proved to possess more merit ; and when rich people generally illustrated in their own persons how money means comfort and poverty discomfort. Yet the impression every observer must have received from the Coronation week was one of prevalent good will and good humour. The man who slept the previous night on the pavement in order to see the pro- cession did not bitterly eye the marquis driving in his coach as a usurper flaunting ill-gotten wealth ; he looked upon him as " part of the show," and no doubt would have felt resentful against this or any other owner of a State coach who did not bring it out to play its proper part. But is this fact noted only by indulgent English eyes too ready to catalogue English virtues ? We think not. The Westminster Gazette of Monday published from its Berlin correspondent a very interesting summary of German criticisms of the Coronation, and they confirm this impression. We English people may be dull, unsympathetic, arrogant, and the rest of it, but among ourselves we have the virtue of not wasting our time and our nerves on social envy. Probably in this respect we are unique among European peoples.

Some of the German criticisms are certainly ill-directed. As a rule the writers insist upon the incongruity between the feudal forms of the Coronation Service and the democratic practices of modem England. They even think that such incongruities will not be tolerated again and that the service will be " reformed." A Hamburg newspaper is more sagacious. 0 The English people, almost to the last man," it says, " cherish picturesque dead forms, because these forms are associated with a past which the Englishman respects. He respects this past because he has escaped from its defects." That pleasure is the absence of pain is true of all momentous political ex- periences. The writer goes on : " Most other European peoples still live under the domination of the past, including the bad sides; and to them the feudal emblems and ceremonies of Coronations remind them of a living discontent from which Englishmen are free. On the Continent a Coronation is carried through for a few; the majority look on it with enmity or indifference. In England alone the fact that a King is crowned creates no sense of injury in any class." Thus this writer from his different and more discriminating angle arrives at the conclusion of the majority of German writers, that the British are a good-tempered people who know no class bitterness. To-day Russia is the only country besides Great Britain where one could count on a general public approval for the spectacle of a Coronation

The German or Austrian Emperors probably would not attempt to be publicly crowned (though, of course, the Emperor Francis Joseph satisfied the condition of the Hungarians that he should be crowned King of Hungary), as they would fear to provoke a storm of class recrimination. Readers of history will remember the extra- ordinarily mixed feelings excited by the Coronation which Napoleon invented for himself. Having no obvious ancestors of distinction he made Charlemagne serve the purpose of granting him the desiderated sanctions from the past. He crowned himself in semi-secrecy, and the half-approving curiosity of the populace gave way before long to annoyance at the long and unseemly wrangle with the Pope and at Napoleon's quibbles about the price France had to pay.

Herr Bluth, another German writer, describes England as " the only European country in which there is an absolute identification of State and people." This is happily true, and will remain true unless it be superseded by the new doctrine that the State is not the people, but a kind of detached provi- dence which can produce money out of the void and put it into one person's pocket without taking it out of another's. In France, which is less free than England, but which talks more of freedom, we see the fury of the Syndicalists, whose purpose is primarily the destruction of " the State " as the origin of all evil. This means that the most advanced Socialists in France have arrived at complete confusion in thinking of the State and the people ; they propose to destroy the property and plant of themselves and their friends in order to benefit themselves. Herr Bluth observes that the identification of State and people in England admits of a phenomenon unknown elsewhere—the respect and liking of the people for the police. Here there is no " police party " or " anti-police party." The police are not drawn into politics. When a charge of improper conduct was brought against them by women-suffragists, it was generally resented by the country ; when policemen who had lost their lives in discharging their duty were accorded a public funeral the sympathy and admiration of the people produced a demonstration such as could hardly have been ex- pected by the most popular and successful general.

The Berliner Tageblatt says :—" We Germans drag along old forms patiently because we do not trust ourselves to give our public life new contents. The Englishman lets himself take pleasure in his ancient Coronation pomp because it does not hinder the businesslike, unceasing transition into a new epoch of British Imperial history. Amongst us a festival like the British Coronation would push every public interest out of the way for weeks and months. In England, side by side with all the show and all the marvels, the public interests go on." We trust that the pace of the traffic through the London streets has not been symbolical of the progress of other business during the Coronation season. The German praise of English methods, of course, covers and implies the ordinary Teutonic faculty of self- criticism. We should expect less praise from our friends the French, because their remorseless logic would prevent them from appreciating results which are not always visibly attached to perfectly modelled administrative schemes. With all allowances, however, we have quoted enough to show that German observers did really notice among us an ability to take the good from the past and leave the bad, to display good temper and orderliness, and to respect all officials who were doing their duty, and therefore working for the people themselves. In brief, we showed to foreigners that we are not consumed by jealousy and suspicion ; we give the rich their due as well as the poor—riches and poverty not being deter- mining conditions in the feelings of the classes towards each other—because we are, take us for all in all, an unenvious people.

Perhaps this fact is not always recognized by Englishmen themselves. Yet one cannot point to a single political cause which has prospered when the appeal has been that of a demagogue to class hatred. The Englishman wants justice, but he does not think of injustice as being maliciously forced on him by a higher class which is working thereby for its own advantage. The present writer was told of a Frenchwoman who, having been a short time in an English family as cook, was asked her impressions of English life. She said, "In France the poor people envy and dislike the rich; in England no one seems to envy anyone—not even the rich." A

sensitive Englishman might indeed waste much embarrass- ment in the presence of persons poorer than himself through the consciousness of being better dressed and more comfortable than they. If his conscience told him that his service to his fellows were not equal to his opportunities then he might be smitten indeed; but if he felt that the man in fustian resented the existence of a man better dressed than himself he would be imputing what is utterly alien to the workman's mind. To private envy Englishmen are no doubt as inclined as all other human beings, for, as Bacon says, envy is of all affections " the most importune and continual" But envy does not exist in England as the normal feeling of one class towards another.