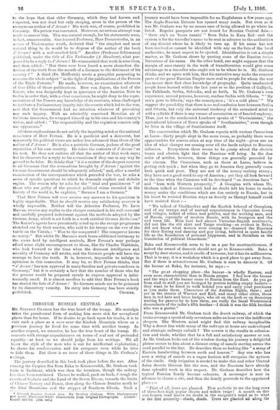 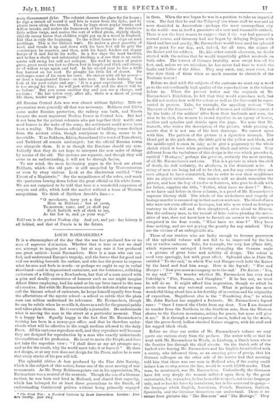 THROUGH RUSSIAN CENTRAL ASIA.* Mn. STEPHEN GRAHAM has the true

heart of the tramp. His nostalgia takes the paradoxical form of making him more sick for unexplored places than for home. If he desires to go back upon his tracks, it is to visit such a place as a cave near the Kazbek Mountain where on a previous journey he lived for some time with another tramp. In another respect, we conceive, he has the true heart of the tramp. He consorts with strange acquaintances on terms of real not of pretended equality—at least so we should judge from his writings. We all know the style of the man who is out for intellectual exploitation ; Le shows his condescension and his arrogance even while he tries to hide them. But there is no trace of these things in Mr. Graham's es langs.

The journey described in this book took place before the war. After crossing the Caspian Sea from Baku to Krasnovodsk, Mr. Graham took train to Tashkent, which was then the terminus, though the railway has since been continued. Thence he walked, pack on back, through the deserts of S:tdaria and the Land of the Seven Rivers, towards the limits of Chinese Tartary and Pamir, then along the Chinese frontier north to the Altai Mountains and the steppes of Southern Siberia. Such a

• Through Russian Central Asia. By Stephen Graham. With Photogravure and many Black-and-White inustrations from Original Photographs. Leaden: LUssell and Co. ads. net3 journey would have been impossible for an Englishman a few years ago. The Anglo-Russian Entente has opened many roads. But even as it was Mr. Graham was by no means sure of being allowed to go where he listed. Regular passports are not issued for Russian Central Asia- " there ain't no 'buses runnin' " from Baku to Kara Kol—and the system is for the traveller's name to be sent in advance to the authorities of any district where he is likely to turn up. If his name has not been received or cannot be identified with any on the lists of the local authorities, he must expect to be ejected. Identification is not a simple matter, as Mr. Graham shows by quoting some of the Russian trans- literations of his name. On the other hand, one might suppose that the margin of uncertainty in the work of transliteration would give some advantage to a traveller who ought not to be where he is. Mr. Graham thinks, and we agree with him, that his narrative may make the remoter parts of the great Russian Empire more real to people for whom the war has meant their first close knowledge of geography. Quite uneducated people have learned within the last year or so the position cf Gallipoli. the Falldands, Serbia, Salonika, and so forth. In Mr. Graham's own experience, unread persons, however, confuse Serbia with Siberia. " ' My son's gene to Siberia,' says the countryman ; it's a cold place.' " We suggest the possibility that there is no real confusion hero between Serbia and Siberia, but only the universal tendency of the untrained mind to add a syllable if there is any excuse of association or of fancied euphony. Thus, just as the uneducated Londoner speaks of " Westminister," the agricultural labourer of Essex speaks of " Southminister," even though he lives in the village of Southminster itself.

The conversation which Mr. Graham reports with various Caucasians at Larse—thirty peopla slept in the same room, so probably there were opportunities for conversation at any time of the night—gives one an idea of what changes are coming over all the lands subject to Russian influence. Everywhere there seems to be gossip about the electric trams and electric light that the Russians will bring. In the due order of artifice, however, these things are generally preceded by the cinema. The Caucasians, such as those at Lame, believe in getting rich quick ; but when they go to America they generally come back quick and poor. They are not of the money-making stamp ; they have not a good word to say of America ; yet they all look forwari to the time when the Caucasus will be developed "on American lines" and "hum with Western prosperity." A Georgian with whom Mr. Graham talked at Krasnovodsk had no doubt left his home to make money under the conditions which are due entirely to Russia, but in his heart he resisted Russian ways as fiercely as Shamyl himself could have resisted them :— " We talked of Vladikavicaz and the Kazhek beloved of Georgians, and of my tramps and of mutual acquaintances in Caucasian towns and villages, talked of ethics and politics, and the working man, and of Russia, especially of modern Russia, with its bourgeois and the evil town life. Mine host had almost Victorian-English sentiments, did not like the slit skirt and Tango stocking—so evident in Baku, did not know what women were coming to—despised the Russians for their flirting and dancing and gay living, believed in quiet family life as the foundation of personal happiness, and in Socialism as the foundation of political blessedness."

Baku and Krasnovodsk seem to be on a par for unattractiveness, if indeed the award of demerit should not go to Krasnovodsk. Baku is swept by dust-storms, and it smells of kerosene, but it has its millionaires. That is to say, it is a workshop which is a good place to get away from. But if there is attractiveness Mr. Graham is sure to discover it. 01 the bazaar at Baku, for instance, he says :— " The great shopping place—the bazaar—is wholly Eastern, and even more characteristic than in Russia proper. I feel how the bazaar and the ways of the bazaar came to Russia from the East. As you go from stall to stall you are besieged by porters holding empty baskets-- they want to be hired to walk behind you and carry your purchases as you make them. Characters of the Arabian Nights, these ; and yet in the streets of Warsaw and Kief, and many other cities, those men in red hats and brass badges, who sit on the kerb or on doorsteps waiting for passers-by to hire them are really the lineal Westernised descendants of the tailor's fifth brother-I think it was the fifth brother who was a porter."

From Krasnovodsk Mr. Graham took the desert railway, of which the trains average a speed of only seventeen miles an hour over the indifferent sleepers. The Western mind might find this railway inexplicable, Why a desert line while many of the railways at home are undeveloped and strategic railways unbuilt l' The answer is the results in coloniza- tion and trade, whether that be a full and satisfactory answer or not. As Mr. Graham looks out of the window during his journey a delightful phrase occurs to him about a distant string of camels moving across the sand parallel to the line. He describes them as looking like "a scrap of Eastern handwriting between earth and heaven." Any one who has seen a string of camels on a vague horizon will recognize the aptness of the simile. Only irrigation is needed to make this and other Central Asian deserts blossom like the rose, and the Russians have already done splendid work in this respect. Mr. Graham describes how the typical Russian family become colonists. A messenger is sent in advance to choose a site, and then the family proceeds to the appointed place :— "First of all, trees are planted. How pathetic to see the long rows of three-foot-high poplar shoots and willow twigs 1 A month on this sun-beaten road leaves no doubt in the emigrant's mind as to what is the first necessity—shade, shade. Trees are planted all along tin main Government dyke. The colonist chooses the place for his house ; he digs a trench all round it and lets in water from the dyke, and he plants trees along the trench. Then he buys stout poplar trunks and willow trunks, and makes the framework of his cottage. He interlaces little willow twigs, and makes the sort of wilted green, slightly shady, slightly sunny house that children might put up in a wood in England. But that is only the beginning. To the willow house he slaps on mud puddings. This is the filthiest work. He makes a great quantity of mud, and treads it up and down with his bare feet till he gets the consistency he requires, and then, with his band, fetches out sloppy lumps of it and bui'ds his walls. In a few days the mud hardens, and he has a shady and substantial dwelling, a .d one that in an earth- quake will swing but will not collapse. His roof he makes of prairie grass, great reeds ten feet to fifteen feet in length and thick and strong, or of willow tss igs again and turf. In his second year he has a little bay harvest on his roof. Bo ploughs his little bit of desert, lie exchanges some of his oxen for cows. He strives with all his power— as does a transplanted flower-- to take root. He looks forlorn. You look at his poor estate and say : 'It is a poor experiment. The sun is too strong for him ; he will just wither off, and the desert will be as before.' But you come another day and you see a change, and exclaim : He has taken root, after all ; there is a shoot of young life there, tender and green.'"

All Russian Central Asia was won almost without fighting. Milittry processions were generally all that was necessary. Bokhara and Khiva came under Russian protection, the railway was built, and Russia became the most important Moslem Power in Central Asia. But had it not been for the patient colonists who put together their wattle and mud houses in the wake of the army, the settlement could never have been a reality. The Russian official method of building towns distinct from the ancient cities, though contiguous to them, seems to be invariable. Thus Bokhara, Ithiva, Samarkand (the tomb of Tamerlane), and Tashkent all remain unchanged ; but the official Russian towns are alongside them. It is as though the Russians should say sym- bolically that they do not hope to interpret the new order of things by means of the old. The systems are separate, and though they will come to an understanding, it will not be through fusion.

To our mind, the most faseinating pages in the book are about rokhara, which—the old part—is still unspoiled by Westernization or even by stray visitors. Look at the illustration entitled "The Escort of a Magistrate." See the magnificence of the robes, and mark the spectators bowing down before the great official on his white horse. We are not surprised to be told that here is a wonderful emporium of carpets and silks, which hold the market without a trace of Western competition. We think of Matthew Arnold's lines :—

"0 merchants, tarry yet a day

Here in Bokhara : but at noon, To-morrow, come, and ye shall pay Each fortieth web of cloth to me, As the law is, and go your way."

Pokbara is the perfect Moslem city. And yet, and yet—her history is all behind, and that of Russia is in the future.