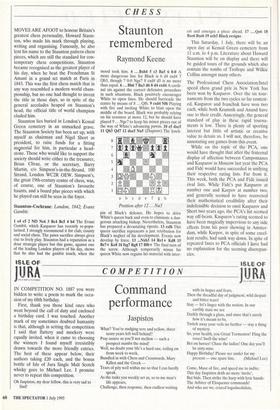 MOVES ARE AFOOT to honour Britain's greatest chess personality, Howard Staun- ton, who made his mark through playing, writing and organising. Famously, he also lent his name to the Staunton pattern chess pieces, which are still the standard for con- temporary chess competitions. Staunton became recognised as the greatest player of his day, when he beat the Frenchman St Amant in a grand set match at Paris in 1843. This was the first chess match that in any way resembled a modern world cham- pionship, but no one had thought to invent the title in those days, so in spite of the general accolades heaped on Staunton's head, the official title of world champion eluded him.

Staunton lies buried in London's Kensal Green cemetery in an unmarked grave. The Staunton Society has been set up, with myself as chairman and Nigel Short as president, to raise funds for a fitting mejnorial for him, in particular a head- stone. Those who would like to support the society should write either to the treasurer, Brian Clivaz, or the secretary, Barry Martin, c/o Simpson's-in-the-Strand, 100 Strand, London WC2R OEW. Simpson's, the great 19th-century centre of chess, was, of course, one of Staunton's favourite haunts, and a board plus pieces with which he played can still be seen in the foyer.

1 e4 e5 2 NO Nc6 3 Bc4 Bc5 4 b4 The Evans Gambit, which Kasparov has recently re-popu- larised. I strongly recommend it for club, county and social chess. The pawn sacrifice always gives rise to lively play. Staunton had a reputation as a dour strategic player but this game, against one of the leading London players of his day, shows that he also had the gambit touch, when the mood took him. 4 ... Bxb4 5 c3 Ba5 6 0-0 A more dangerous line for Black is 6 d4 exd4 7 Qb3, though 7 0-0 Nge7 8 cxd4 d5 is no more than equal. 6 ... Bb6 7 Ba3 d6 S d4 exd4 A cardi- nal sin against the correct defensive procedure in such situations. Black positively encourages White to open lines. He should barricade the centre by means of 8 ... Qf6. 9 cxd4 Nf6 Playing with fire and inviting White to blast open the middle of the board. Black was probably relying on his resource at move 12, but he should have played 9 ... Nge7 to keep his minor pieces out of the way of White's advancing pawns. 10 e5 dxe5 11 Qb3 Qd7 12 dxe5 Na5 (Diagram) The lynch-

Position after 12 .. . Na5 pin of Black's defence. He hopes to drive White's queen back and even to eliminate a dan- gerous attacking bishop. Nevertheless, Staunton has prepared a devastating riposte. 13 exf6 This queen sacrifice represents a just retribution for Black's neglect of his development. Events now develop by force. 13 ...Nxb3 14 Rel+ Kd8 15 Be7+ Ke8 16 6cg7 Rg8 17 Bf6+ The final turn of the screw. Although temporarily minus his queen White now regains his material with inter-

This Saturday, 1 July, there will be an open day at Kensal Green cemetery from 11 a.m. to 4 p.m. Literature about Howard Staunton will be on display and there will be guided tours of the grounds which also contain the tombs of Trollope and Wilkie Collins amongst many others.

The Professional Chess Association/Intel speed chess grand prix in New York has been won by Kasparov. Over the six tour- naments from the two cycles so far contest- ed, Kasparov and Ivanchuk have won two each, while both Kramnik and Anand have one to their credit. Annoyingly, the general standard of play in these rapid tourna- ments is low. There is plenty of sporting interest but little of artistic or creative value to detain us. I will not, therefore, be annotating any games from this event.

While on the topic of the PCA, one would have thought that aftet the fraternal display of affection between Campomanes and Kasparov in Moscow last year the PCA and Fide would have succeeded in unifying their respective rating lists. Far from it. This week, both the PCA and Fide issued rival lists. While Fide's put Kasparov at number one and Karpov at number two, and generally seemed to have recovered their mathematical credibility after their indefensible decision to omit Kasparov and Short two years ago, the PCA's list seemed way off-beam. Kasparov's rating seemed to have been magically impervious to any side effects from his poor showing in Amster- dam, while Karpov, in spite of some excel- lent results, had sunk way down. In spite of repeated faxes to PCA officials I have had no explanation for the seeming discrepan- cies.