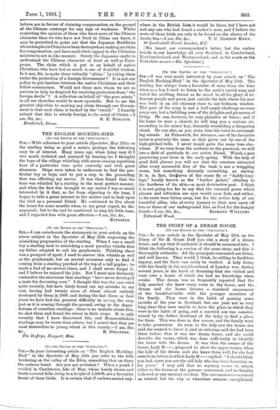 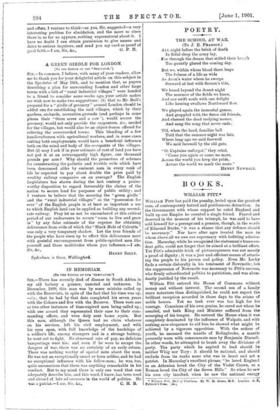 THE STORY OF A DREAM HOUSE.

(To THE EDITOR OF THE "SPECTATOR.1 SIR,—In your article in the Spectator of May 25th on the Diary of Sir M. Grant Duff you cite a story of a dream house, and say that if authentic it should be examined into. I think the following is a version of the same story, and this is thoroughly authentic. All the principals concerned are living, and well known. They would, I think, be willing to facilitate inquiry, and the facts can easily be verified. A lady living with her family in the neighbourhood of London was, during several years, in the habit of dreaming that she visited and went over a house of which she had no knowledge when awake. This dream was so frequently repeated that the lady asserted she knew every room in the house, and the dream and the house became a standard amusement at the breakfast-table with the younger members of the family. They were in the habit of passing some months of the year in Scotland, but one year not so very long since they were unable to have the place to which they were in the habit of going, and a married son was commis- sioned by the father (husband of the lady) to find a place for them. This was done in due course, and the family went to take possession. As soon as the lady saw the house, she said she seemed to know it, and on entering said she had been there before, that it was her dream house, and she could describe the rooms, which was done sufficiently to identify the house with the dream. It was then the owner of the house, Lady B—, proposed to show the upper rooms, when the lady of the dream said she knew them well, for she had seen them before, to which Lady B— replied : "I should think you had, since you are the old lady who has been haunting us for years." I may add that no mystery seems to attach either to the house or the persons concerned, and no fatality followed or any unusual incident. The circumstances occurred as related, but the why or wherefore remains unexplained,

and offers, I venture to think—as you, Sir, suggested—a very interesting problem for elucidation, and the more so since there is, so far as appears, nothing supernatural about it. I have no doubt I can obtain permission to give names and dates to serious inquirers, and send you my card as proof of