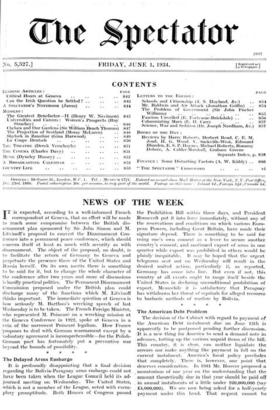 IT is expected, according to a well-informed French correspondent at Geneva, that an effort will be made to reach some compromise between the British dis- armament plan sponsored by Sir John Simon and M. Litvinoff's proposal to convert the Disarmament Con- ference into a permanent peace conference, which should concern itself at least as much with security as with disarmament. The:object of the proposal,: no doubt, is to facilitate the return of Germany to Geneva and perpetuate the presence there of the United States and Russia herself. On its own merits there. is something to be said for it, but to Change the whole character of the conference after two years and more of disCussions is hardly practical polities. The Permanent Disarmament Commission proposed under the British plan could discharge many 'of the functions Which- M. Litvinoff thinks important. The immediate queStion at Geneva is 'how seriously M. Barthou's wrecking speech of last Wednesday is to be taken. The French Foreign Minister, who represented M. Poineare on a wrecking mission at the Geneva Conference in 1922, spoke at Geneva in a vein _ of the narrowest Poincare legalism. How France 'proposes to deal with German rearmament except by a 'voluntary agreement is incomprehensible—for the Polish- 'German pact has fortunately put a preventive war 'beyond the bounds of possibility.