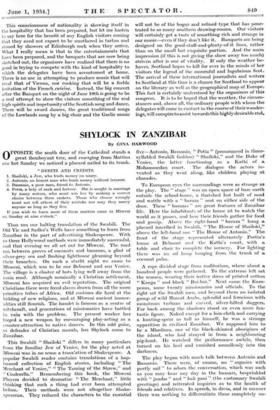 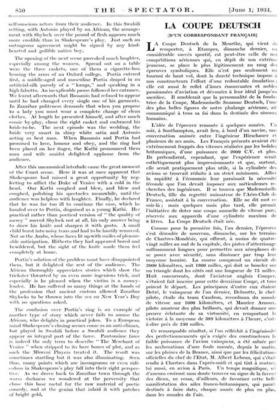 OPPOSITE the south door of the Cathedral stands a great flamboyant tree, and emerging from Mattins one hot Sunday we noticed a placard nailed to its trunk.

1. Shailoki, a Jew, who lends money on usury.

2. Antonio, an honest man who lends money without interest.

4. Potia, a lady of rank and fortune. She is sought in marriage by many suitors, who must win her by making a correct choice between three caskets. Those who choose wrongly must not tell others of their mistake nor may they marry anyone as long as they live.

If you wish to learn more of these matters come to Mbweni on Sunday at nine o'clock."

Thus ran our halting translation of the Swahili. The Old Vic and Sadler's Wells have something to learn from Zanzibar in the part of advertising Shakespeare. With us these Hollywood methods were immediately successful, and that evening we all set out for Mbweni. The road ran between groves of coconuts and bananas, a glint of silver-grey sea and flashing lighthouse gleaming beyond their branches. On such a starlit night we came to Mbweni, which was to be our Belmont and our Venice. The village is a cluster of huts lying well away from the main road. Although nominally a Christian settlement, Mbweni has acquired an evil reputation. The original Christians there were freed slaves drawn from all the more primitive tribes of Africa. Old customs die hard at the bidding of new religions, and at Mbweni ancient immor- alities still flourish. The hamlet is famous as a centre of witchcraft, and generations of missionaries have battled in vain with the problem. The present worker has forged a new weapon by encouraging play-acting as a counter-attraction to native dances. In this odd guise, as defender of Christian morals, has Shylock come to Zanzibar.

This Swahili " Shailoki " differs in many particulars from the familiar Jew of Venice, for the play acted at Mbweni was in no sense a translation of Shakespeare. A popular Swahili reader contains translations of a hap- hazard collection of English stories, including " The Merchant of Venice," " The Taming of the Shrew," and " Cinderella." Remembering this book, the Mbweni Players decided to dramatize " The Merchant," little thinking • that such a thing had ever been attempted before.- Their methods were not altogether Shake- spearean. They reduced the characters to the essential five—Antonio, Bassani°, " Potia " (pronounced in three- syllabled Swahili fashion) " Shailoki," and the Duke of Venice, the latter functioning as a Kathi of Mohammedan court. The dialogue the actors in- vented as they went along, like children playing at charades.

To European eyes the surroundings were as strange as the play. The " stage " was an open space of bare earth outside the school-house, a thatched but built of mud and wattle with a " baraza " seat on either side of the door. These " barazas " arc great features of Zanzibar life. Here the inhabitants of the house sit to watch the world as it passes, and here their friends gather for food and gossip. Above the right-hand " baraza " hung a placard inscribed in Swahili, " The House of Shailoki," above the left-hand one " The House of Antonio." The front of the stage represented alternately Portia's house at Belmont and the Kathi's court, with a table and chair to complete the scenery. For lighting there was an oil lamp hanging from the trunk of a coconut palm.

A rope divided stage from auditorium, where about a hundred people were gathered. To the extreme left sat the women, wearing their native dress of printed cotton " Kanga " and black " Bin-bui." Next came the Euro- peans, some twenty missionaries and officials. To the right sat the Swahili men, and beyond them an isolated group of wild Muscat Arabs, splendid and ferocious with monstrous turbans and curved, silver-hilted daggers. Far back among the shadows stood an even more fan- tastic figure. Naked except for a loin-cloth and carrying a hunting-spear. as tall as himself, he was a strange apparition in civilized Zanzibar. We supposed him to be a Mhadimu, one of the black-skinned aborigines of the island, who had strayed in from a neighbouring pig-hunt. He watched the performance awhile, then turned on his heel and vanished soundlessly into the darkness.

The play began with much talk between Antonio and Bassanio. There were, of course, no " argosies with portly sail " to adorn the conversation, which was such as you may hear any day in the bazaars, besprinkled with " jambo " and " hali gain " (the customary Swahili greetings) and reiterated inquiries as to the health of friends and relatives. In speech, in dress, and in manner there was nothing to differentiate these .completely uu- selfeonscious actors from their audience. In this Swahili setting, with Antonio played by an African; the arrange- ment with Shyloek over the pound of flesh appears much more credible than in Shakespeare's play. Just such an outrageous agreement might he signed by any kind- hearted and gullible native boy.

The opening of the next scene provoked much laughter, especially among the women. Spread out on a table were the three caskets, one of them a cigarette-box bearing the arms of an Oxford college. Portia entered first, a middle-aged and masculine Portia draped in an artificial-silk parody of a " kanga," and speaking in a high falsetto. An inexplicable pause followed her entrance. We learnt afterwards that Bassanio had refused to appear until he had changed every single one of his garments. In Zanzibar politeness demands that when you propose to a lady you must wear a complete change of clean clothes. At length he presented himself, and after Much comic by-play, chose the right casket and embraced his bride-to-be. The next episode was the wedding, the bride very smart in shiny white satin and Antonio acting as best man. When Bassanio and Portia had promised to love, honour and obey, and the ring had been placed on her finger, the Kathi pronounced them man and wife amidst delighted applause from the audience.

After this uncanonical interlude came the great moment of the Court scene. Here it was at once apparent that Shakespeare had missed a great opportunity by neg- lecting to afflict the Duke of Venice with a cold in the head. Our Kathi coughed and blew, and blew and coughed, polishing his spectacles meanwhile, until the audience was helpless with laughter. Finally, he declared that he was far too ill to continue the case, which he handed over to Portia, disguised as a young Kathi. Her practical rather than poetical version of " the quality of mercy " moved Shyloek not at all, his only answer being to draw his knife and sharpen it with gusto. A small child burst into noisy tears and had to be hastily removed. Not so the Arabs, whose faces lit up with smiles of pleasur- able anticipation. Hitherto they had appeared bored and bewildered, but the sight of the knife made them feel completely at home.

Portia's solution of the problem must have disappointed hem, but it delighted the rest of the audience. The African thoroughly appreciates stories which show the trickster thwarted by an even more ingenious trick, and especially is he pleased when the victim is a money- lender. He has suffered so many things at the hands of the profession that ancient custom allowed Zanzibar Shyloeks to be thrown into the sea on New Year's Day with no questions asked.

The confusion over Portia's ring is an example of another type of story which never fails to amuse the African, who delights in practical jokes. To a- European mind Shakespeare's closing scenes come as an anti-climax, but played in Swahili before a Swahili audience they appear as integral part of the farce. Pantomime farce is indeed the only term to describe " The Merchant of Venice " when stripped to its bare bones of plot, and as such the Mbweni Players treated it. The result was sometimes startling but it was also illuminating. Seen thus, many points which are incongruous or even ridi- culous in Shakespeare's play fall into their right perspec- tive. As we drove back to Zanzibar town through the warm darkness we wondered at the perversity that - chose this base metal for the raw material of poetic - comedy, and at the genius that inlaid it with patches of bright gold,